Welcome to an ongoing inquiry about the behavior of people and dogs.
Blog Home >> Dogs >> “A Fully Functional Tooth?”

Good news. Mostly. Will has recovered from his 5 + hour root canal, but I remain a tad tweaked about the definition of a “fully functional tooth.” I choose the root canal for Will instead of an extraction because the vet specialist said it would leave Will with a full set of “fully functional teeth.” After the 5 hours of anesthesia and $1,600, the same vet said “His tooth is dead, and thus will become more brittle and more easily broken, so be sure to never let him chew on anything hard, like bones or hard toys or raw hides.”

Uh, no bones? Not even relatively soft, raw knuckle bones, like the big beef bones that Lassie and Willie get several times a week? “Nope.” The rest of our conversation, in which I was far more polite than I was feeling, included me asking “Have you ever seen a dog chew on a real bone?” (answer = no) and “Wouldn’t you consider chewing on a bone a normal behavior for a dog?” (I really was polite, honest.)

Fact is, if I had known before the procedure what I knew after, I would have made a different choice. (Note a comment came in from a reader who said she had a root canal done on her dog and the tooth broke not long after; she had to have it extracted eventually anyway.) However, it turns out (thanks to the kindly email of one of our readers) that extractions have their down sides too. I’d known it was more intrusive on the dog (Will’s tooth was the huge premolar in the upper jaw, the one w/ 3 roots embedded in the jaw), but I wasn’t told until recently that the teeth around an extraction tend to build up more tartar and may require the dog to be anesthetized more frequently to have his teeth cleaned.

However, I’ll admit to being a tad tweaked at the vet dentistry specialist, who was extremely nice and clearly very caring of Willie, but who didn’t give me all the information I needed to make an informed decision. But mostly, I was mad at myself. Why hadn’t I done more research before hand? Why hadn’t I lived on the internet the night before finding out every possible fact I could before I met with the specialist? Oh I’d done due diligence in a way, talked to 4 vets, found a great specialist who could see Will in a quiet but highly respected vet clinic, but still….

A dear friend, who also is a veterinarian, listened to me tell my story recently and said: “Vets who specialize in dentistry always tell you never to let your dog chew on bones…  no matter why you go to see them.” It  makes sense, if you think about it. Who are they going to see but dogs that have trouble with their teeth, including ones who broke a tooth when chewing on a bone?

So here’s my question to you, dear readers: what’s your take on the correlation (causation?) of chewing on real bones and broken teeth? After all, something broke Will’s tooth, and maybe it was chewing on a bone I gave him. Is there any research out there on bone chewing and teeth breaking? Probably… I’ll see what I can find, meanwhile, I’d love to hear your experiences. How many of you let your dogs chew on real bones without having problems with damaged teeth?  How about the opposite?

Meanwhile, back at the farm. It’s fall, it’s gorgeous and I love it! Here’s some New England Asters blooming in front of the side of the barn and a diagonal drain pipe: 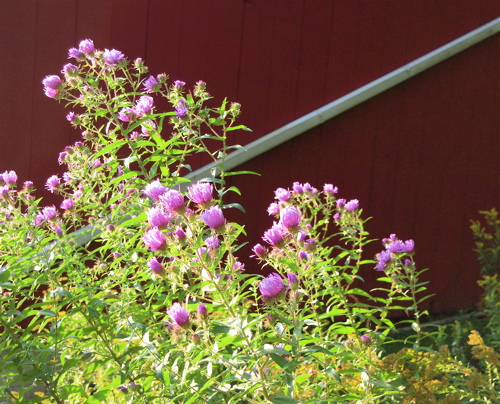 And here’s Mr. Will last night in the evening light, moving the ewe flock so that I can put down their supplemental hay. Note pudgy Brittany (Spears) in the middle, and the small white lamb 2nd from left who magically oozes through the fence and gets back to her mamma no matter what we do…. 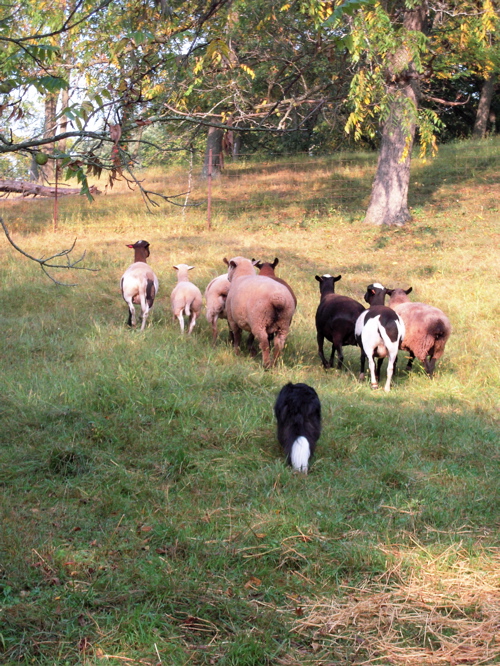