Welcome to an ongoing inquiry about the behavior of people and dogs.
Blog Home >> Animals and the People Who Love Them >> Are Clicks Better Markers than Words?

We’ve been talking about markers and secondary reinforcers, and there have been some great comments about using clickers in some contexts and not in others. Like many readers, I use clickers for some training, and not for others. Your comments got me thinking about why I use them sometimes, why I don’t use them others, and the physics of why clicks can be such a powerful marker (and/or reinforcement).

First, I don’t use clickers for all training. This is partly because I am a classic “absent minded professor” and there are just too many times in the world in which I forget everything but my head. I also admit that I am always happiest when it is just me and a dog–no clicker, no leash and as soon as practical, no food as reinforcement.

However, I’ve always used clickers for trick training. As I thought about what’s different between training tricks and other behaviors, I realized that tricks are often asking a dog to do something she doesn’t normally do, and so the precision of a clicker when you are shaping a new behavior is invaluable. To me (and this is very much just as matter of individual preference) that kind of precision isn’t necessary when training a dog to perform a behavior on cue that she normally does anyway. Teaching Sit and Lie Down is so darn easy that the precision of a clicker isn’t as important as it is when teaching something that requires shaping.

THE BENEFITS OF CLICKS There is no question that clicks have many advantages over words as markers. For one thing, they are short, usually only 100-200 milliseconds or so, while even a one syllable word is going to be at least twice as long. That’s part of why clicks are more precise. In addition, clicks are what are called “broad band” sounds, meaning that the sound contains energy in a broad range of frequencies, from high to low. That’s an advantage when ‘talking’ to mammals. We have what’s called a “tonotopic’ acoustic receptor system, meaning that each cell in the brain that receives sound is programmed to respond to a narrow range of frequencies. Some cells are stimulated most readily at 500 Hz, others at 1,000 Hz. That means that “broad band” sounds like clicks, which have energy in a large range of frequencies, light up lots of cells at the same time, like a busy switchboard, while “narrow band” sounds like words have energy in a smaller range of frequencies.

In addition, clicks are what are called “instant onset/offset,” so that the energy in the sound begins at full force, rather than gradually increasing in amplitude. That creates what looks like a “wall of sound” that stimulates cells that look for ‘edges.’ Make sense? [I remember there is some research that supports clicks being more effective training markers, but I don’t have time to look it up. I’ll bet it’s on Karen Pryor’s website….]

Here’s a not-so-great image from my dissertation that illustrates a “picture” of short, broad band sounds… look at the vertical bands in the top left.Clicks are very much like those tall vertical bands, whereas speech is far messier and less precise. 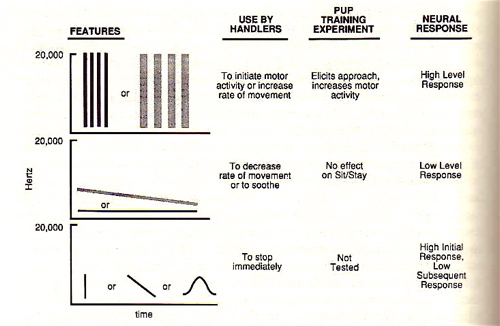 That said, I still don’t use the clicker all the time, and for the last few years have used “yes” as a verbal marker. But that’s a sloppy word, very hard to say with precision (“yesssssssss”). You need a nice, clipped stop consonant at the end.  I messed around the last few days with just making a tongue click, but for some reason my brain and mouth don’t want to do that. I’ve thought about “Yep!” but I’m concerned about it sound like “Hope.” Hummmm, still pondering. Would love to hear what you all use besides “yes” and tongue clicks! (Which are a great idea, but my brain just wants to use speech, sloppy as it is).

MEANWHILE, back on the farm: We had a lovely, relaxing Sunday morning at a good friend’s, Hope playing with an 8 month old BC, Willie and I getting to work sheep in a big, open field.  We’ve worked so little this summer I didn’t know what to expect, but Will did great, listening beautifully and slowing his pace nicely when asked. Boy is four years old different than two or three! Notice that the sheep are moving at just the right speed… not too fast to get panicked, not too slowly to end up turning and challenging the dog. 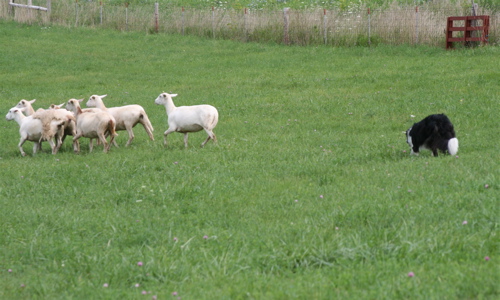 Here’s Hope and his buddy Hap. Hope looks oh-so-serious  here (and doesn’t he look grown up for a 5 month old dog?), but the two of them played beautifully, lots of loose body, open mouth puppy play. Was fun to watch. 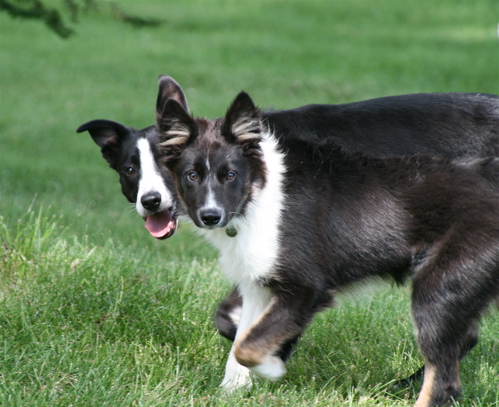