Welcome to an ongoing inquiry about the behavior of people and dogs.
Blog Home >> Animals >> Behavior Modification versus Management

The seminar in Arroyo Grande was great fun; the hosts at Gentle Touch Pet Training could not have been kinder, more supportive or better organized. The afternoon half day session on Play was a joy–and all that work creating a new seminar felt well worth it by the end of the day. During the Play Seminar and the Dog-Dog Reactivity sessions I got lots of questions from the audience, some of which I was able to answer that day, but some of which I didn’t get to. I thought I’d address some now, since there were some great ones that I thought deserved an answer.

One written question related to dogs who are over reactive when they see other dogs: “Is there ever a point where you give up on behavior modification and recommend strict management only?” Good question, yes? And the answer is YES and NO. There are certainly times in which I recommend strict management practices must always be followed. For example, I showed a video of a dog named Oscar, whose owners worked with me for over two years. Oscar was adopted from a shelter, taken to dog training class a few weeks later, walked into the door of the classroom and immediately crushed the skull of a young beagle after briefly sniffing it. What a nightmare. However, because of the dedicated work of the owners, Oscar changed from a dog who became physiologically hysterical when he even saw a dog blocks away, to a dog who was able to be loose in my pasture with Luke and Lassie. Except for one thing: Oscar had on a muzzle, and I strongly recommended that Oscar never ever ever be let loose around an unfamiliar dog without a muzzle. Not after causing that much damage, and not after starting as a dog unable to control himself at just the sight of another dog.

But I said “Yes” AND “No” because there are very few contexts in which some behavior modification isn’t useful. Oscar would never be let loose with unfamiliar dogs or taken to a dog park, but he could be taken to the vet clinic without causing a scene, and walking him on a leash was no longer a nightmare. For any dog, I would base my recommendations on how serious the problem was, how much time and interest the owners had to do behavior modification, and the goals of the owners. Bottom line, I’m always an advocate of “better safe than sorry.”

I’m not sorry we got to go to the central coast of California though. It was gorgeous, and we spent an ‘animal rapture’ hour watching Elephant Seals a few miles north of San Simeon (we skipped the Hearst Castle in favor of the seals, pretty clear where our priorities lie!). This time of year the sub-adult and adult males are on the coast to shed their coats (they actually lose an layer of skin too, and look pretty tacky before they are done.) The young males especially spend some of their time sparring together, in preparation no doubt for the breeding season to come this winter. Some of them weren’t doing much self-handicapping, we saw quite a few with bloody necks, although nothing like the wounds seen when they are fighting for real.

Here’s an older male (you can tell by the size of their ‘noses’.. their noses start as little Jimmy Durante buds and grow each year to absurd proportions). This one was all by himself, but making a heck of a racket as he displayed in the waves. (By the way, you can’t get an idea of size in these photos, but males can grow up to 6,000 pounds! These animals are HUGE!) 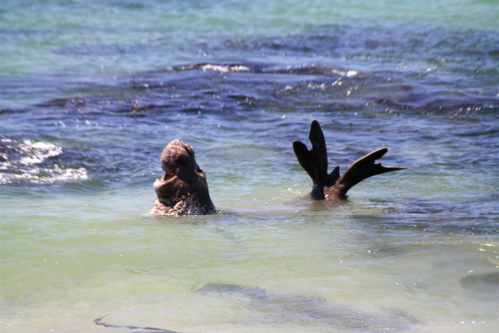 These two young males (see their smaller noses?) were quite the pair, bellowing and mock biting at each other for the longest time. There were 2 other pairs doing the exact same thing right beside them. Jim got this picture, and about 150 more! It was an amazing experience to watch them, and if you are ever in the area, I highly recommend it. Breeding season is in February, I’d love to go back and watch, then drive up the coast to see the Monarch butterflies hibernating in Big Sur. 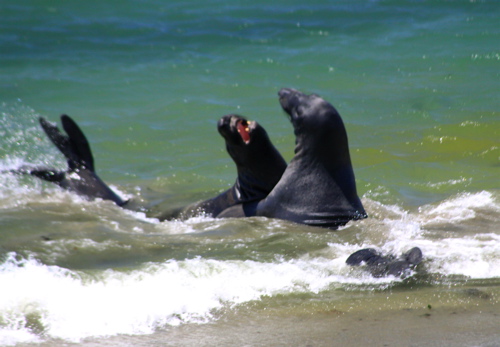 « Off to Play with Play in Dogs
“Listening” to our Dogs »