Welcome to an ongoing inquiry about the behavior of people and dogs.
Blog Home >> Animals and the People Who Love Them >> Collars I have Known and Loved. Or Not. 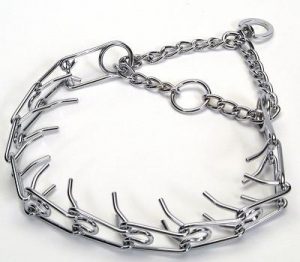 The impetus for this topic came from an article I sent out on Facebook on how to behave around a service dog. The article made many good points about respecting the space around a working service dog and his/her human, but I didn’t notice that it came with a photograph of a dog wearing a prong collar. Many people commented on the content of the article, but several also called me out for sending around a photograph of a service dog wearing a prong collar.

After initially being abashed abut not noticing the dog’s collar, I realized that this created an opportunity to have a dialogue about the state of dog collars in 2017. Our family dog, Fudge, had the same collar worn by all the dogs in the neighborhood–leather, buckle fastener. I’m sure she would have pulled us around like a wagon if we’d ever taken her on a leash walk, but I don’t remember that happening. She must have been leashed for her annual trip to the vet, but that was only once a year. Otherwise, we opened the door in the morning and let her out. She met up with the rest of her neighborhood community during the day for occasional walks with the gang, but otherwise stayed close to home. (Of course, I would never do this now, but see a post from 2012 if you’re interested in a discussion about dogs and autonomy.)

Fast forward ten plus years, when I was 19 or 20, and my first husband Doug and I decided to buy a Saint Bernard with wedding present money (intended for engraved silver, sent by my Houston aunt). We named him Cosby. (Yes, after that Cosby, whose vinyl comedy albums were the funniest thing we’d ever heard. Sigh.) I enrolled him in training classes outside of North Hollywood, CA, where we moved for Doug to break into television. I remember the first class as if it had been yesterday. We arrived with the prescribed “training collar,” and a five-foot leash. We were instructed to say “sit” like a drill sergeant, and then pop the leash if the dog didn’t comply. This didn’t go well with a young Basenji who was also in the class. In a matter of minutes the instructor had the dog in the center of the class, jerking the leash harder and harder because the dog wasn’t sitting as required. (How the dog knew that sitting was expected is still beyond me.) Still burned into my brain is the image of the dog eventually attacking the instructor, who ended up hanging the dog in mid air, the collar getting tighter and tighter as time went on. The instructor screamed SIT! SIT! SIT! while the dog growled, and snarled and somehow managed, amazingly, to move up the leash and attack the man who appeared to be trying to kill him.

I don’t know what eventually happened. My wise-beyond-his-years Saint Bernard watched this for a minute, then turned around and lay down facing away from the horror. I took one look at him and said “You’re right, Cos, this is awful.” We left and never returned. (FYI, if I saw that happening now I would intervene and call the police.)

Fast forward to the 1980’s, when I was in graduate school in Madison, WI, studying hard but also committed to becoming a dog trainer. I didn’t have my own dog, but I borrowed a friend’s husky and we enrolled ourselves in what was, at that time, the only game in town. Nobody hung a dog, but there was a lot of leash popping going on. Every dog was required to wear a choke collar. If the owner was having trouble controlling the dog with that device, the instructors had plenty of prong collars they could try. Prong collars were considered the “be all and end all” in controlling a dog. That was then. This is now.

But here we are in 2017, and prong collars are still being used. It should be clear that I’m not a fan. That probably doesn’t come as a surprise to anyone. The reasons not to use a prong collars are many: 1) They use “positive punishment” (positive does not mean good here!) to suppress behavior, which is associated with an increase in behavior problems [Herron et al Appl An Beh Sci 2009], an increase in aggression, and can diminish the trust between dog and owner, 2) they don’t teach the dog what you do want, and 3) they can cause physical damage to the neck, including to the sensitive thyroid gland, the spine, and the muscles of the neck. If you haven’t seen it yet, there’s a good article in Whole Dog Journal about this issue.

End of story? Well, no.  Because several people wrote in on Facebook defending prong collars, explaining that they were the only way they could control their dog. This is a legitimate concern. It’s all very well to dismiss someone’s concerns about a dog pulling them around, but the fact is, the results can be serious. I write in The Education of Will about a woman whose dog-dog reactive Saint Bernard badly injured her shoulder while lunging toward another dog. People with service dogs often have limited physical ability to control a dog, and can be horribly injured if a dog breaks training and lunges forward. Imagine how vulnerable you would feel if you have a large dog, and truly felt you had no other choice than a prong collar. 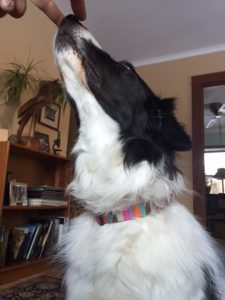 Willie shows off his colorful collar while Jim lures his head up.

Which brings me to the “collars I have loved part”. I’d like to initiate a discussion about the best ways to walk with a dog who is not yet trained to move through space like a primate (walking shoulder to shoulder while strolling with a friend), and walks like a dog (reacting to the environment in real time). Yes, of course, training is important, and if I were queen, all dogs would be walked with fixed nylon or leather collars and a set of great training sessions under their belt, uh… collar. But that’s simply not realistic for everyone, all the time. So what are the alternatives?

My favorite way to control most otherwise out-of-control dogs aren’t collars at all, they are front-attachment body harnesses. The brands I know the best are the Sense-ation Harness, and the Easy Walk harness,  but there are a lot of other brands out there. What’s critical is that the attachment is in the front; an attachment at the top of the dog’s back allows a dog to haul you around like a wagon attached to a Clydesdale. 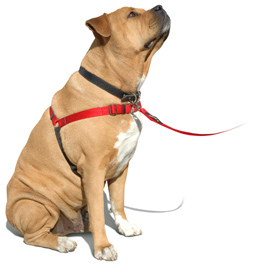 However, I’ve had a few clients whose dogs were so strong, and desire to lunge so great, that head collars were safer than a body harness. I remember when they first came out, Gentle Leaders being the leaders in the field.  Dr. R. K.  Anderson, one of the dearest men in the history of the world, and Ruth Foster co-invented the collar as an improvement on “choke” collars. And, indeed they were. What a wonderful improvement. Other head collars that are good, and still available, are Halti’s, as well as Snoot Loops, created by PhD animal behaviorist Peter Borchelt.  I used head collars a lot when they first came out, but the fact is that many dogs dislike having something on their head.  One has to be careful too, since the misuse of a head collar can injure a dog. Dr. Sophia Yin wrote a great article on how to use head collars safely.

That said, there are a gazillion brands out there. I’d love to hear what you have found most helpful with your own or your client’s dogs. Let’s have a conversation about what works, and remember to be compassionate to dog owners who don’t know that they have any options beyond prong collars. By the way, here’s a brief but interesting article about the history of dog collars. If you have time you might want to check it out.

You get the drift. Right now we’ve had temps in the 40’s F, which is ridiculous for February.  Just about all the snow is melted, and we’re left with nasty looking piles of dirty snow and the beginnings of serious mud. I talked to someone early last week during the snowstorm on the east coast and told them I was jealous. They were not amused.

But melting does create some lovely shapes. Here’s snow/ice falling off the barn roof on a warm and sunny day. 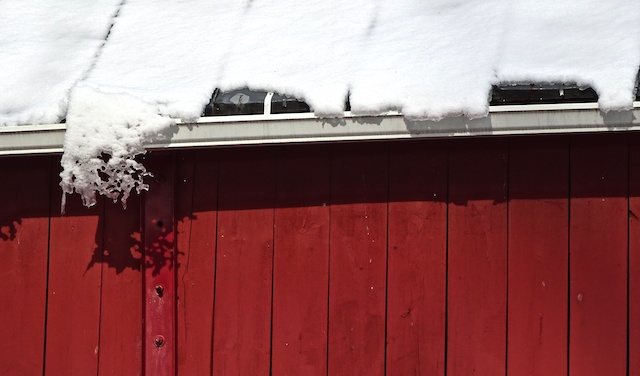 Here’s the color red the house: 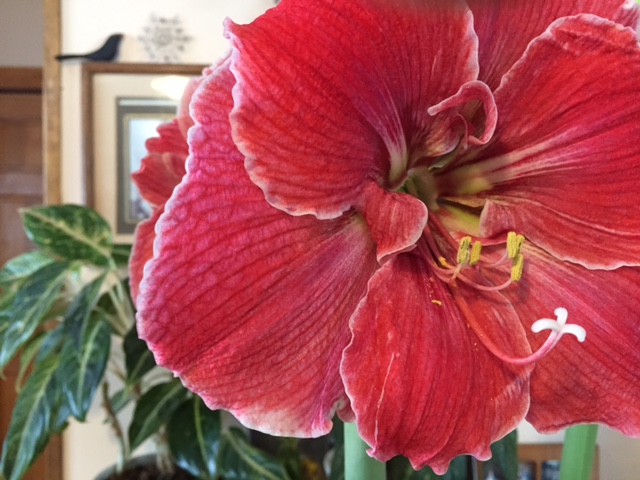 « The Books Behind the Book
It’s Official! The Education of Will is out in Print and Audio. »