Welcome to an ongoing inquiry about the behavior of people and dogs.
Blog Home >> Dogs >> Eat Your Veggies (Tell That to Your Dogs!)

Here’s support for those of us who feed veggies to our dogs from a study in JAVMA (Vol 227, No. 1, July 1, 2006). My great Chinese medicine DVM vet, Dr. Jody Bearman, looked it up for me after we talked about diet and health the last time she came out to treat Will and Lassie. In brief, the study looked at the prevalence of a certain type of cancer in, admittedly, just one breed of dog–Scottish Terriers, and found that the consumption of green leafy, and yellow-orange vegetables at least 3 times a week correlated with lower rates of urinary bladder carcinomas. Now… this is just a correlation, not proof of causation. Additionally, it’s one type of cancer, in one breed of dog. However, given the overwhelming evidence in human health and nutrition that colorful vegetables are rich in phytochemicals believed to have anticarcinogenic properties, it is an interesting study that deserves attention.

By the way, “green, leafy vegetables” included spinach, greens, and leaf lettuce but not the cruciferous veggies like broccoli and cauliflower. The latter did NOT show a significant correlation between high rates of consumption and low rates of cancer, but the authors pointed out that they were fed rarely and the sample size was extremely low. In humans, crucifers are believed to be chock full of bioactive compounds that promote health, so I’m not going to take them out of my dog’s diet (right now their veggies mix is broccoli, spinach and carrots, but that’s this week… who knows what I’ll cook up next week!)

Meanwhile, back on the farm, the Chipping Sparrows fledged this morning (finally! say Susi and I both), the Wrens appear to be feeding their babies in the shrubs under the vent and the poor Barn Swallows keep flying into the garage in the evening and being shut out during the day. In the evenings I’m painting the car port that Jim built on the side of the garage to protect the farm truck while listening to the throaty buzz of bumblebees, the semi’s of the bee world,  and the plaintive call of the Pewee PEEEE AH WEEE as I paint away.

Here’s Willie from last night, moving Martha, Lady Godiva and lambs off the feeder so I can pour in their grain. (Martha is doing beautifully by the way, but now her daughter in the other flock sounds sick.  Just call them my own economic stimulus package to the veterinary profession.) Notice the intent look on Will’s face as the lambs turn and stare. 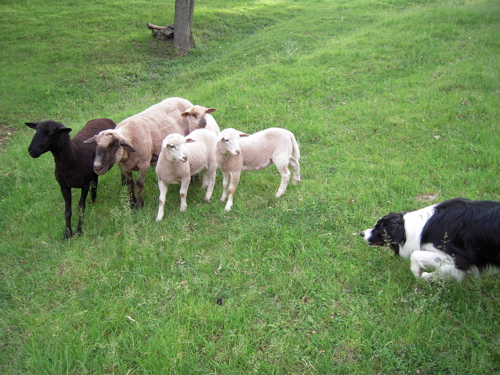 The ewes above look like they were paying no attention to Will, but they have actually just turned their heads away from Will (and the food behind him) and in a moment did this: 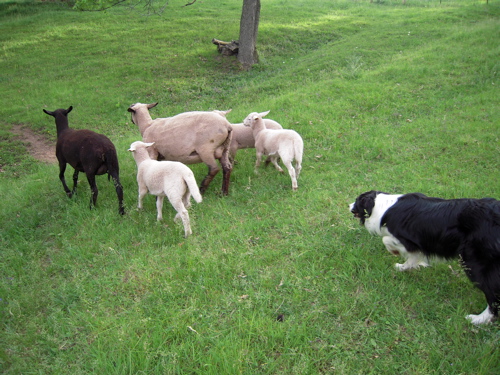 « Help with Podcast!
Fear in Dogs and In-Utero Experience »