Welcome to an ongoing inquiry about the behavior of people and dogs.
Blog Home >> Animals and the People Who Love Them >> Free Ranging Cats, Wildlife & New Studies About Management

I miss the birds. For most of my adult life I have fed wild birds, and watching them has added immeasurably to my life. In some places, like here at the farm, there have been 8 or 10 feeders up, overflowing with creamy, white suet and shiny, black sunflower seeds. They attracted a multitude of species, adding color and life to the grey and brown blahs of winter. In other places, all I could manage was one tubular seed feeder hanging isolated and alone outside of an apartment window. But still, it brought me scarlet red Cardinals and Military Blue Blue Jays.  So beautiful!

But Jim and I have taken down the feeders at the farm, because farm cats Nellie and Polly were killing the birds they attracted. It seemed profoundly unethical and environmentally wrong to create a situation in which we were luring birds to their death so that we could enjoy watching them. But we need the cats. Without them, we have rats in the barn. Once they got so bad they came into the house. Believe me, this is not an animal you want in your house.

With the cats we have no rats; without them we have lots. All other forms of prevention are not effective or safe for the dogs.  I’m talking communities of Brown (“Norway”) Rats, large, shiny-eyed imports from Europe who stare at you accusingly when you have the audacity to enter their barn. Before Nellie and Polly came (and after Sushi left), for all I know they were preparing to log onto the internet and advertise “Tunnels to Rent!” on Craig’s list.

But free ranging cats, whether feral or owned, can do a lot of damage to wildlife, even more than previously believed. Nellie and Polly kill enough rodents that I sometimes apologize to the Red-Tailed Hawks soaring overhead and say “I’m sorry!” It is not a perfect system, I hereby admit. But there are one or two cats living on a farm as there are here, and there are large colonies of feral cats living all over the country that add problematically to the population and to the damage to wildlife. But how should these large groups be managed? It is a tough question, and the reason why new research from the ASPCA on how to manage colonies of free-ranging cats is so important. You can read a summary of it here,  or go to the full article and get all the details.

The study compares different ways of attempting to decrease colonies of free-ranging cats, especially TNR (Trap, Neuter and Release, usually back to where the cat was captured) versus Trap and Don’t Return (which ranges from adopting out to the more draconian euthanasia). It simulated the results of different management techniques, and found that, although TNR can be successful in some environments, it will take much longer than other methods to reach zero population growth. One practical implication of the work is that it is most effective to spay/neuter as many animals as possible in a colony at once, instead of a “catch them as you can” approach.

Of course, the question remains: If you don’t return the cats to where they came from, what happens to them? Some wildlife advocates say they should be killed, because they cause so much damage to native species. Others, including myself, are strong advocates for finding the cats homes if possible, sending them to sanctuaries, or returning them spayed or neutered if that is the only alternative.

These are issues that are often difficult to discuss. Getting wildlife ecologists and cat lovers and rescue groups to sit down together and strategize is not easy. This issue pushes a lot of buttons and makes objective discussions challenging. One of my colleagues at the University of Wisconsin received death threats for suggesting that cats kill large numbers of birds, a fact which is now undeniable. I brought this issue up on my radio show once, and was barraged with people enraged that 1) anyone would let a cat outside when it is safer inside, 2) anyone would force a cat to live inside when it has evolved to live outside, 3) anyone would accuse cats of killing wildlife, 4) anyone would let their cats outside and kill wildlife… you get the idea.

You can see examples of this in the comments to the ASPCA blog–some of then are on the snarky side. But I credit the ASPCA for attempting to add to our knowledge of how to handle this difficult issue. To many of us, cats are companion animals and members of our family. To others, cats are non-native invasive animals that threaten species already beleaguered with pollution and habitat destruction. To me, they are both, and the least we can all do is acknowledge that it is an important issue and do what we can to ameliorate conflicts between our pets and wildlife. I’d argue that most importantly, we 1) Need more research, 2) Need to acknowledge that TNR can work in many environments, but not in all, 3) Agree that all stake holders need to work together and be respectful of one another, and 4) Need to go pet a cat, because we all need a dose of oxytoxin after being brave enough to objectively consider this issue.

This morning the Black-capped Chickadees called from the pine behind the house, and even though I didn’t get to see them up close, I loved hearing them and knowing that they were at far less risk from Nellie and Polly. I am happy that Jim and I have made the choice that we have… it is not perfect, but it is our best compromise. We simply are doing the best we can, and that’s all anyone can ask of others, to at least understand that there is a conflict between our beloved cats and wildlife, and that we need to be in a conversation with all “sides” about how to deal with it.

I’d love to hear your (constructive and respectfully worded) thoughts. Do you have cats? Indoor or outdoor? Ever had a rat in your kitchen?

MEANWHILE, back on the farm: Things are a bit quieter here, now that the ram lamb Little Big Man has gone to his other home to breed the eleven ewes there. He was not happy to be wrangled into the truck, but forgot it all soon enough upon encountering a group of receptive ewes, three of whom immediately accepted his favors.

Jim and I enjoyed taking bags of Christmas goodies around to friends this weekend (carrot/applesauce bread, herb rolls, Jim’s famous Christmas cookies and Greenies for dogs and cats). Such a wonderful way to connect with dear friends, I love that part of the holidays. We also celebrated Solstice on Friday night with some wonderful friends who go way back (both were clients of mine a million years ago!) Willie and Maggie got a long, off leash walk at a local, county park Sunday morning. We haven’t taken those kinds of walks as often as we used to; I was reminded how good it is to get our dogs out and about to different places where there are new scents to investigate. I have held off a bit until I was 105% sure that Maggie had an instant Stop and Recall. I tested it out early on the walk and both dogs stopped in their tracks and turned to look at us. GOOD DOGS! we said, ran back a few steps and gave them a liberal dose of yummy treats. I gave Maggie treats a few more times after that (the walk lasted about 40 minutes) any time that she happened to come close, to remind her how fun it is to stay connected. We also took off running the time Maggie took a trail to the left and we went right. Jim and I dashed down the trail as fast as we could so that Maggie would look up and go “Argh! Where did they go?” It works beautifully for dogs who deeply care where their humans are, and not a bit for others. You are forewarned. Play the “Disappear game” on a German Shorthair and you’ll be searching for your dog for hours.

Tootsie didn’t go on the walk, it was much too far for her. She kept the couch warm for us. She did, however, fall out of bed last night and hit the ground with a resounding thump. I think I was almost as shocked and scared as she was–I felt her start to go but couldn’t stop it from happening. I’m happy to say she seems none the worse for wear. Poor babe.

And the kitties? Staying close to home, curled up in their feline igloo more often than not. We have a heating pad underneath it, and they do love to cuddle up in it together. Nellie sometimes goes with us when we take a walk up the hill, even if there is deep snow on the ground; so fun to go on a walk with a cat! But no snow now… it’s cold and colorless with rain expected. Yuck. Not the best of weather for sure, sort of awful really. Mud mud mud when it is not supposed to be mud season. Maybe a little snow before Christmas? That would be nice. How about you? Snow? Or is it summer there…

Here is Polly in a very, very different season. Was it really ever so green here? 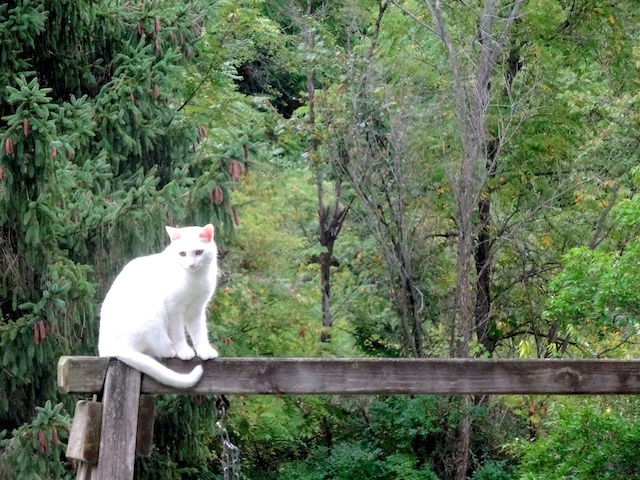 Nellie loves the low window that looks into the barn. She likes to sit in it basking in the sun in warmer weather. 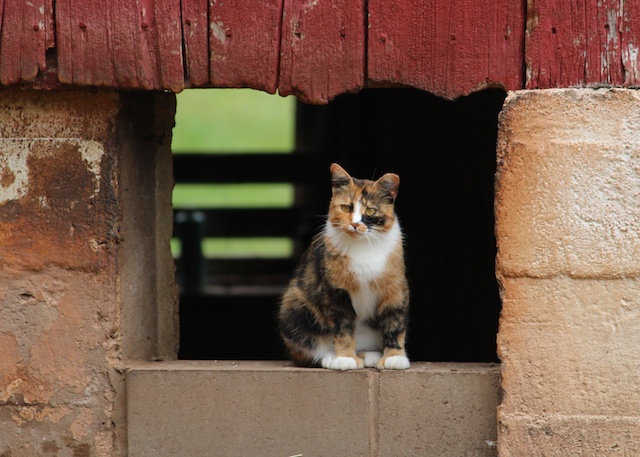