Welcome to an ongoing inquiry about the behavior of people and dogs.
Blog Home >> Dog Behavior >> Holiday Photos. With Dogs.

I just did a photo shoot for a magazine cover with Willie (more on that later) and I was reminded while doing it how many pet dogs are going to be asked to participate in the GREAT HOLIDAY PHOTOGRAPHIC ADVENTURE. Except I don’t think dogs would use the word “adventure” if they could talk about it.  I thought this might be a good time for a bit of advice, based on my experiences. I’d love to hear about yours too.

1. First and foremost, remember that big round black lenses can be terrifying to shy or nervous dogs. They look exactly like big, round threatening eyes (the kind that dogs get right before they bite you), and are very, very scary to some dogs.

I was rudely reminded of this when a TV station rushed me and Willie into a side room for a “teaser shot” before we went into the main studio. We were completely prepared for the studio, but not to be rushed into another room in a panic and to have a cameraman thrust his huge hand-held TV camera, with its huge, round black lens, literally inches from Willie’s face. Willie was terrified, began to bark and try to hide behind me, while the photographer chased him around my legs and I attempted (unsuccessfully) to 1) stop the cameraman 2) soothe Willie and 3) appear cheerful and professional while on camera.  You can imagine how much fun this was.

If your dog has any shyness at all, ask the photographer to stay well away from your dog and use the zoom function if need be. Your dog will thank you for it. (Be careful with flashes too… they can scare some dogs as much as the lens.)

2. Dogs asked to Sit and Stay in the middle of family photos must think we have all lost our minds. First off, how many dogs have been taught to sit and stay in that situation? Very few… usually “sit” is when they are facing you, so just asking them to face the same way as you is confusing to them. If  you want shoulder to shoulder shots, then help your dog learn how to do it. Ask him to sit beside you (not facing), and give him a treat when he holds that pose for a half of a second. It’s even better to have someone pretending to take pictures. We did that on the photo shoot yesterday with Willie (I’m teaching him that as a cue: “Photo Shoot!”, meaning sit beside me and look at the camera!) and he was such a good boy. Of course, we used the usual “shake the treat bag over the photographer’s head” for the perfect shot, but it helped to have Willie thrilled to get into position, beside me on the couch.

3. Honor your dog. If Fluffy just really, really doesn’t want to be on a Sit-Stay beside  Ginger, maybe that’s cuz Ginger has been sending her dirty looks all day. Give the dogs some choice about where they are going to be positioned. It matters greatly to them; more than to you.

4. And the best advice? Drop the posed shot and go for casual snaps of life as it happens. Aren’t those the ones you cherish later anyway?

What’s your advice? Any amusing stories about pictures with dogs in any context? I am sure everyone would enjoy them as much as I will.

I said I’d get back to the photo shoot that Willie and I did yesterday: Here’s the bottom line. Madison Magazine is doing a feature on me for their February issue, including a cover of me and Willie on the front. That is so kind of them and I am truly grateful. And if only there was a way to get that done without, oh, actually having to do it. Photo shoots sound so cool, but in reality are simply miserable to someone like me. That’s not because of the staff, at least in this case the art director and stylists were exceptionally nice, and have my undying appreciation for understanding about Willie. We talked about what Willie needed beforehand and the art director and photographer were fantastic: they put the camera far away (we ended up moving it much closer because all was going so well) and they gave me lots of time to get Willie acclimated. Overall, I’d say Willie had the time of this life, and I suspect it’s hard to believe he’s ever been anything but a perfect dog. Yeah, just what we wanted!

So Willie was the great part, he had a great time, and did virtually everything I asked him to do instantly and did it perfectly (did I mention how proud of him I was?). The hard part for me is that everyone has a vision of what the cover will be: the art director has colors and background picked out, the stylist needs your hair to be smooth and not frizzy so she looks like she knows what she’s doing, the style coordinator wants you to dress with at least a modicum of fashion and to match the vision of the art director. And you? Well, you want to look like YOU (but of course, your best possible version. Okay, maybe even a little better than usual? But still you, if you know what I mean.).  So you go in and they have clothes they want you to wear (did I actually blurt out “I’d rather be dead that put that on?” Yup, I guess I did.), someone you’ve never known does your hair and make up and you just never end up feeling like, well, yourself. So heaven only knows what the cover will look like. All I can say is that all the folks I worked with yesterday were truly kind and considerate, and tried hard to make me comfortable while still getting what they wanted.

This afternoon they come to the farm for photos for the article, inside the magazine. Ah, so much easier for me! It’ll be my fly-away hair and my very unfashionable clothes and Willie and the lambs… but holy moly, now I need to clean up the house! Oh well, too late!

MEANWHILE, back on the farm: 4 more inches of snow yesterday, and then freezing drizzle that coated the snow with a layer of ice. Poor Willie’s paws got so tired up the hill that he stopped asking to fetch his stick and just lay down. Wish I could put snow shoes on him (but if it keeps up I’ll get him boots). I’m still trying to adapt to the winter… not successful so far. We took more pictures of the lambs but they were terrible, but I’ll keep trying.  Right now the yard light is out (making walking down the icy hill to the barn an adventure), my internet doesn’t work at the farm, my television doesn’t work, my LP fireplace doesn’t work and neither does my printer. Ah life.

I’ve decided to cheer myself up with some flowers from New Zealand. I hope they make you smile too!

Boy do roses love NZ, and do Kiwis love roses! 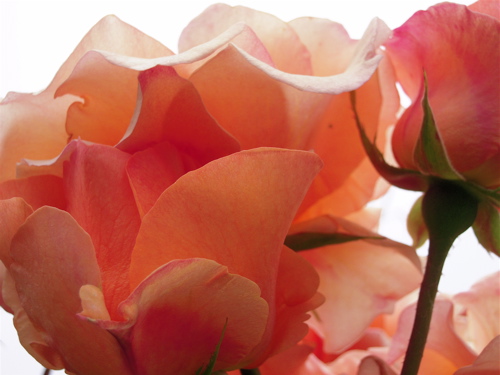 Look at the pollen sacs on this loaded down bee! 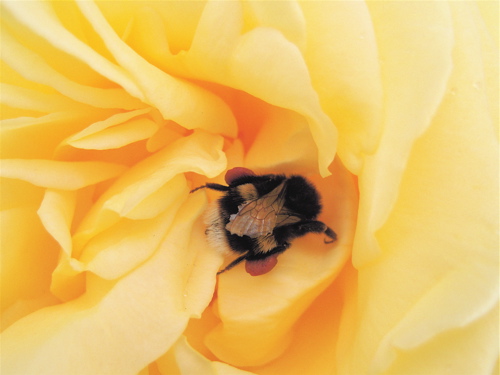