I just finished reading a review copy of Karen Pryor’s new book, Reaching the  Animal Mind (Scribner). I don’t know when it’s coming out, I’ll let you know as soon as I hear (but you can pre-order it on Amazon now). It’s an inspiring book, especially for those that haven’t yet used clicker training on any of their animals. I don’t use clickers for everything I have to admit, I tend to use them most for tricks, or any behavior that is not in a dog’s normal repertoire.

One of the interesting parts of her book is a report of research by Lindsay Wood that found clicker training significantly faster than a verbal marker at training new behaviors. This makes a lot of sense, given what we know about sound and the way it is received. I did my dissertation work on sound, and learned that sounds like clicks (broad band spikes, basically) are perfectly constructed to get a lot of response from acoustic receptor neurons. They are also unique, and so get more attention than any words we could produce.

I also loved reading about her early years at the Sea Life Park, thrown into the “deep end” as it were, as a last minute trainer for the planned marine mammal show that was starting in just a few months. Karen’s ability to combine the science of learning with real live problems, and her intuitive understanding of the importance of figuring out why an animal is, or is not, doing what is asked, is truly inspiring.

Meanwhile, I brought Willie and 4 sheep to campus yesterday for a sheep herding demonstration for my University class. Willie had never worked inside in a enclosed arena before, much less in a setting with 150+ people watching. I thought he’d be a bit nervous, and he was, even more so than I thought. What interested me most was that the sheep had no trouble percieving and responding to it. They wouldn’t move away from Will unless he was just a few feet away from them. Normally their flight distance from Will is about 15-20 feet, (flight distance varies tremendously depending on the dog and the sheep and the context), but in the arena Will had to be right behind them to get them to move.

Poor Will tongue flicked his way around the entire hour, but he didn’t make any huge mistakes, never lost his head and so I am still proud of him. The fact is, Will is simply not the perfect herding dog. The pro’s would call him weak, in that he doesn’t have the confidence and the power to intimidate stock, especially bold individuals who are willing to threaten  him. The ideal herding dog takes complete charge over a herd, but without frightening them.. a tricky balance indeed.  However, Willie tries hard and I can’t help love him for it. He’s biddable and he’s game and he tries so very hard, it’s just impossible not to love him for it. He helped load the sheep up for the demo, and even though the ram challenged him (and ran him backward 10 feet), Will came back and reasserted himself, and the ram turned and trotted up the ramp into the truck.

As I think about it, I realize that I myself have never been particularly brave, but I’ve tried not to let that stop me in whatever I do. I have, after all, spent over 20 years working with aggressive dogs.  Could it be that part of why I love Willie so much is that I identify with him?

Who knows, but here’s part of why I love my two-legged guy, Jim, so  much: The photos below is of just one of two gorgeous flower arrangements he brought me for Valentine’s Day (did I mention he also brought his home made heart-shaped sugar cookies, made from his grand mother’s recipe? Oh yeah, and then there’s the chocolate he brought… am I lucky or what?) 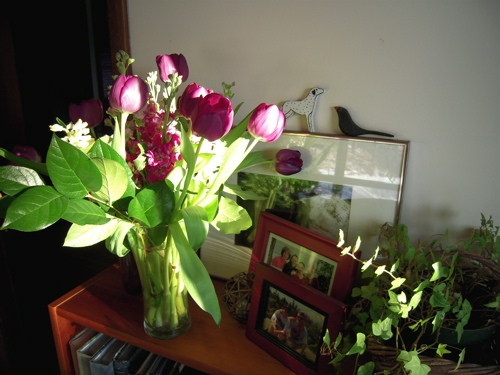 And here’s why colorful flowers are so welcome this time of year, although I do love the fresh snow on last year’s flower stalks: 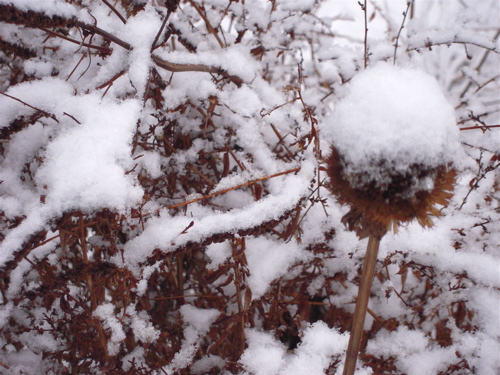 « Darwin, Emotions and early Adventurers
Speaking for Spot; On the Road Again »