Welcome to an ongoing inquiry about the behavior of people and dogs.
Blog Home >> Animals and the People Who Love Them >> Keeping “Retired” Dogs Busy

Mr. Willie is ten years old now, in spite of my incantations to the spirits to keep him eternally young. I’ve retired him from sheepdog competitions, which I’m sure was a good decision. But it also means that every day I walk back to the house after Maggie and I have a long training session, and see Willie’s big-eyed face looking at me by the door. 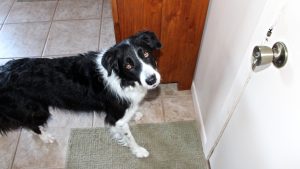 Take Me! Take Me! Pleaaaase…

“My turn? Is it my turn now?” If you have a “retired” dog, you know exactly what happens in my heart when I see his face looking at me as I begin to leave. Sometimes it IS his turn, because there is always work to do on the farm. Perhaps Willie and I will go back up the hill and move the sheep down to the barn for their evening meal, or to sort out a limping ewe. But sometimes there are no farm chores left for him to do.

Granted, Willie and Maggie get a hard run every morning in games we’ve adapted to Willie’s shoulder issues and his somewhat rude style of play. (That deserves a post all by itself, I’ll make a note of it.) And granted, he does still work sheep 4 or 5 times a week, and gets to play at herding when we’re off the farm. But it’s not enough. It might be for some dogs, but not for Willie. He’s still the one who barrels through the door to go out unless asked to wait, who leaps up in the living room every time I shift my legs while watching television (while 3 year old Maggie snores on a comfy chair). Willie may be retired from competition, but he’s not retired from having an engine always on “smoking”.

This is why I find myself thinking about how I can keep him engaged, while respecting the fact that he’s ten years old and not structurally sound enough to work sheep seriously. Not to mention that I myself am not retired from working, and I don’t have unlimited time to entertain my dogs. I know I’m not alone. How many of you have driven away from an older dog who you couldn’t fit in the van on your way to some dog sport? I know there are a lot of us out there; I can’t count the number of times I’ve heard someone say it broke their heart to drive away and leave their elderly, retired competitor at home.

That’s why I resolved this weekend to balance things out as much as I can. Every time I return from a training session with Maggie, I’m going to take Willie out to teach him some new tricks. We’re playing around with some freestyle games, although I know I’ll never find the time to compete in two dog sports. But Willie loves learning new things, and even five minutes having him heel on both sides of me or weave through my legs is enough to make him happy.

Tootsie needs some more mental exercise too. I’ve resolved this winter to teach her a few new tricks. Granted, her favorite trick is sleeping on the couch, but she’d do anything for food, and is capable of far more than I ask of her.

What about you? I know I’m not alone here, and I’d love a conversation about how you have coped with keeping an aging dog mentally and physically active. What has worked? What hasn’t? Of course, we can define “worked” in a variety of ways, including worked for you, or for your dog? Certainly we need to honor the reality that older dogs can’t be expected to perform as they did when younger, at least if the activity requires strength and stamina. At the same time, we need to remember that staying vital is surely as important for aging dogs as it is for people.  And then, there’s that lack of infinite amounts of time and energy that we have ourselves… Please jump in here, I’d love to hear your thoughts and experiences.

MEANWHILE, back on the farm: Good news and bad news. I’ll get the bad news out of the way first. My favorite ewe, Lady Godiva, has contracted a horrible disease, Caseous Lymphadenitis, which has been transmitted to all three of her lambs. It’s catching, nasty to treat (I’ll spare you the details), and standard protocol is to “cull” the affected animals. Of course it’s Lady G, who truly is like a pet to me. She comes when I call, leading the flock back to the barn when I call out for her. She is also our best breeding ewe. She’s nine years old and has twins or triplets every year, including three lovely lambs this year. I don’t know exactly how I will precede, I have lots more research to do, but I do know that we can’t have our co-owned ram come to the farm as scheduled this fall.  Thus, no lambs at all next year. That in itself breaks my heart; it’s one of my favorite parts of spring. Neither can I keep one of her ewe lambs to join the flock as a breeding ewe. I know this is just part of the package–sometimes nature really is “red in tooth and claw”.” But that doesn’t mean it doesn’t hurt.

Here are the four of them in quarantine: 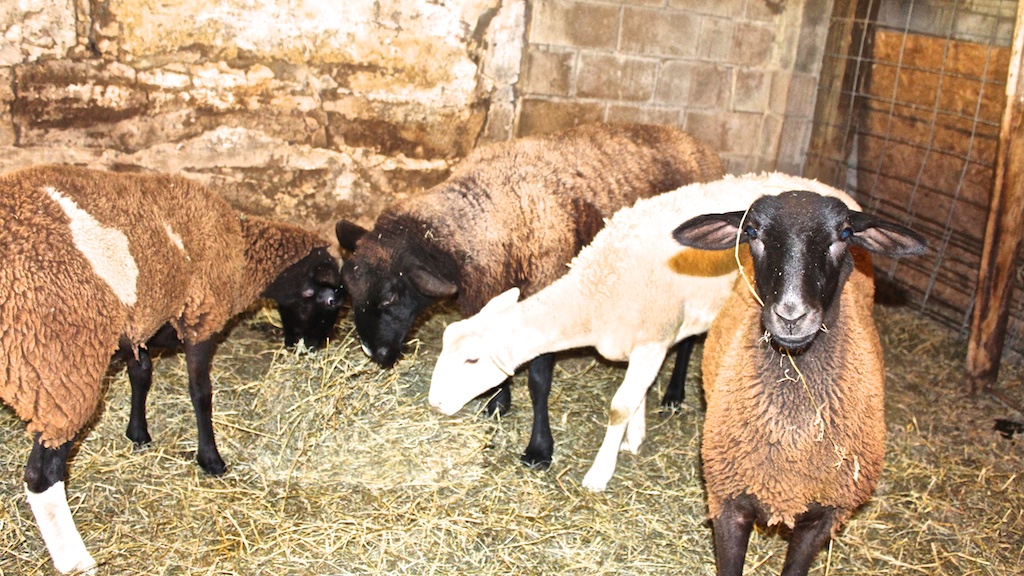 However, there’s lots good on the farm right now too. The weather continues to be postcard perfect. Blue sky sunny, red leaf-colorful, and white, puffy cloud gorgeous. Of course, the only day last week it was dull and cloudy was the day of the “photo shoot” at the farm for photographs for the memoir website I’m working on. But it was a perfect Saturday morning when we went to look for congregations of migrating Sandhill Cranes. And find them we did, somewhere around 300-400 of them. They nest here–we have a pair that nests just a bit south of the farm–so we get to see them all summer, but seeing massive numbers of them is special indeed. 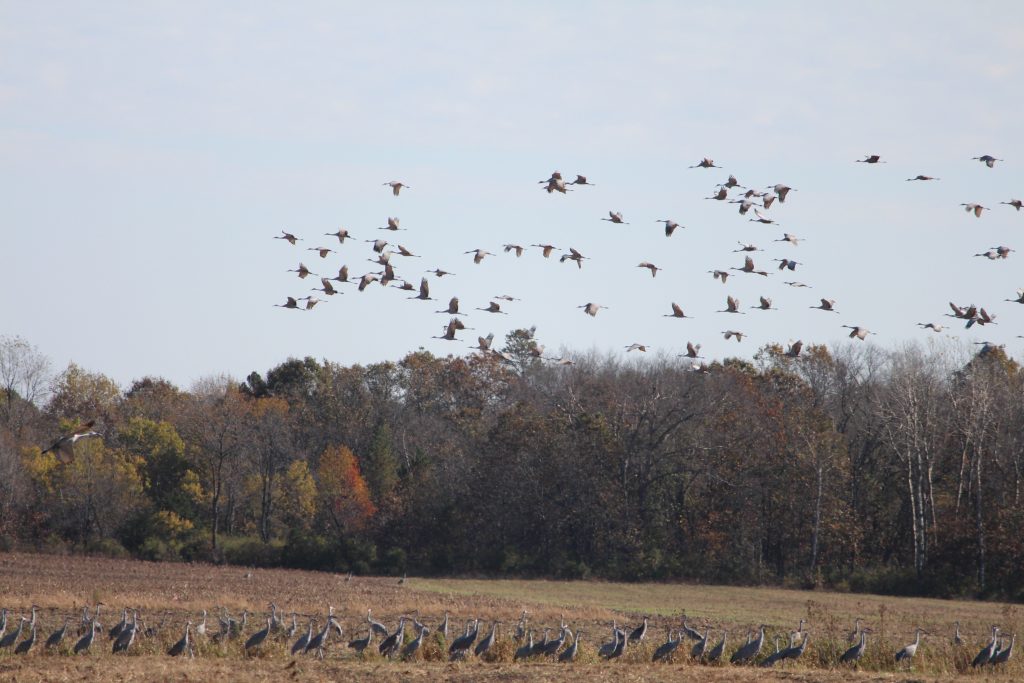 We also had perfect weather to host the annual fall party for the “Decon” volunteers for Habitat for Humanity. “Decon” stands for deconstruction, and refers to taking out valuable materials from buildings being torn down or refurbished to sell them at “Restores” to raise money to build the new houses that we are most familiar with. Jim is a volunteer on the Decon team, and for two years now we have hosted the annual fall party. After a yummy potluck, we walked up the hill for a sheepdog demonstration. We all had great fun, but Maggie and Willie most of all. I had plans to take lots of photos for you all, but got so wrapped up in hosting the party I completely forgot. What I can show you is my chrysanthemum extravaganza. I found a place that sold massive ones for ridiculously little money, and went a little crazy. Hey, I only bought 17 of them. They added a lovely note of color to the yard, and how wonderful that I had such a good excuse to buy them! 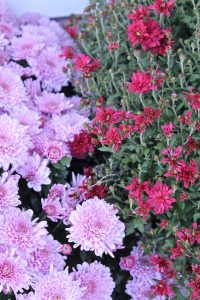 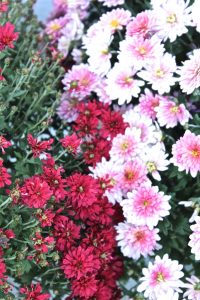