Welcome to an ongoing inquiry about the behavior of people and dogs.
Blog Home >> Positive Reinforcement >> Lambapalooza!

I’ll continue on in the next weeks talking about the D word (next week intra-specifically (between dogs) and the week after inter-specifically (between dogs and people), but I thought an intermission celebrating spring and Easter would be nice. Besides, you all deserve reinforcement for such considerate and thoughtful comments (which have been fascinating by the way, thank you so much.)

Three ewes have lambed so far, and I have 5 to go. Lady Godiva & Spot had twins and Rosebud, what a woman, had triplets. All are doing well. Spot’s lambs had bellies so full of milk just an hour after their birth that they felt like they had bricks in their tummies. Nothing better than quiet lambs with warm mouths and full bellies (or worse than bawling lambs with cold mouths and empty ones.)

I only have 5 more ewes to lamb out. I have such a tiny flock that serious lamb producers laugh when I tell them my winter herd equals a total of nine. When I was in New Zealand the sheep folks I talked to looked stunned when I said I had 8 or 10 ewes. They count them in lots of a hundred, or a thousand, and could barely imagine having a flock so small. “Ah,” they’d say after learning that not only did I have a micro flock, I gave them names. “So you have them as pets,” they’d say, with a friendly but somewhat incredulous smile on their face. Well, I guess I sort of do. But not . . . An interesting question… how close a social relationship does one have to have to call an animal a pet?

Speaking of, I am becoming worried about Dorothy. my oldest ewe. As a matter of fact, I’m waiting for the vet to call. Dorothy is a week overdue. A couple of days is meaningless, 4-5 becoming a bit of a concern. A full week? Hmmm. Here is she resting, about an hour ago. I would have been more worried, but she seems fine, hungry and as active as everyone else. But darn I wish her lambs would come soon. I expect she does too… check out her belly: 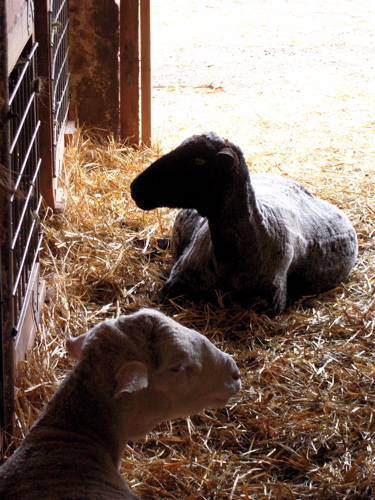 It’s crazy busy for everyone in the country right now. It’s almost 80 degrees (30 degrees over normal), things are growing and moving and changing and it feels like everything needs to be done right away. You don’t have much control over when you do things on a farm: the weather and season plans out your agenda for you. I got the pasture fertilized yesterday (check), some of the mulch out of the gardens (check), some of the fencing repaired (check) but couldn’t spray the thistles because it was too windy. The daffodils all opened up at the same time, literally in one day, and would burn out in another day or so if it stayed so warm and sunny. Luckily, it’s clouding up and supposed to rain. Good good good. Don’t want summer in spring and it’s terribly dry now, and we really need the rain. 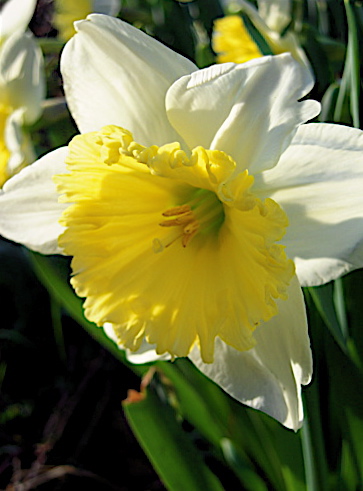 And here’s some lamb rapture shots of Andrea Stephenson (new marketing director and web queen extraordinaire) and me today at lunch time: 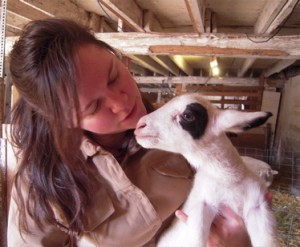 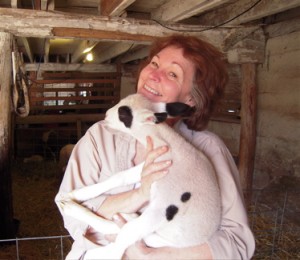