Welcome to an ongoing inquiry about the behavior of people and dogs.
Blog Home >> Dogs Playing with Dogs >> Lambs Thriving, Dogs Playing Is Warming My Heart

Much warmer now, might even be up to 20 degrees. Wow, feels like an entirely different place. The lambs are doing beautifully. On Sunday Jim and I opened up the panel dividing the two ewes with lambs and let them all in together. We wanted to wait to be sure that the lambs were well bonded to their moms (and vice versa) and that they were stable and healthy enough to tolerate being shoved around a bit by the ewe that wasn’t their mom. Given how vigorous Snickers was (I am being so kind here, using the word vigorous instead of several others I can think of) when she was trying to reject her own little ewe lamb, I didn’t want to subject the single lamb to that kind of abuse. However, we don’t call him White Dude for nothing. He looks like he’s in training for a starring role in professional wrestling, so we figured he would be able to handle some ‘nudges’ from Snickers.

(You should know that lots of sheep people will be laughing right now… getting shoved away by sheep that aren’t your mom is just part and parcel of being a lamb.  Granted, I was being a bit, uh, cautious, partly because of the cold, party because Snickers seems out-of-the-box aggressive to other lambs, and partly because, okay, I’m a wuss.) After a few minutes of confused lambs and indignant ewes, everyone seemed to get it all sorted out. Whew. Now the lambs are able to play together and have more space to run around. Ideally, they’d be frolicking on emerald green pastures up the hill, but the grass is  under about a foot of ice and snow.

Here’s the lambs from this weekend: 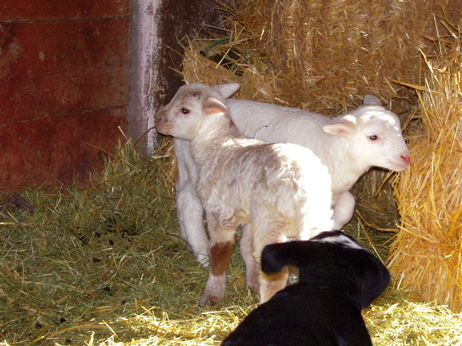 You can see how big White Dude is in this photo of him and the little ewe lamb: 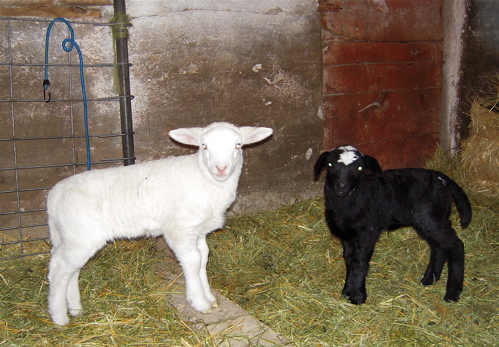 Meanwhile, Willie and Lassie are warming my heart. They started playing in the living room Saturday night, and I was completely transfixed while watching them. First Willie threw himself in front of Lassie, with his head held high, his ears up at the base, with the rest of the pinna (ear flap) flattened against his head. His legs were erect and stiff, and he stood still as if frozen for a moment, then threw himself down in a play bow in front of Lassie. She responded with her “play bark,” (only heard while she’s playing, one WOOF, repeated about every 3 or 4 seconds) and picked up their favorite tug toy.  They proceded to play tug for several minutes, while I was transported away from huddling in the cold on the couch, blue snow, frozen ice buckets and bitter winds.  I imagined that they were individuals of a wild species that one rarely sees… imagine how enchanted you’d be if you’d never seen a dog and all of sudden there were 2 of them, playing this amazing game right in front of you. I felt overwhelmed with gratitude that they were in my life, and that by simply doing what dogs do, I could be elevated and warmed with amazement and appreciation. Those of us lucky enough to have dogs are lucky indeed.

« Too cold; Feed the birds
Human-Animal Relationships; People and Dogs »