Welcome to an ongoing inquiry about the behavior of people and dogs.
Blog Home >> Dog Behavior >> Raw Diets and Assistance Dogs

Several comments to the last blog brought up the issue of Delta’s new policy of banning pets fed with “raw protein food” from being Delta Society Pet Partners. I’m guessing that although they were aware that an increasing number of people feed raw food to their pets, (Delta itself cites the “increasing use of raw protein diets” as a reason for their policy), they were not expecting the firestorm that blazed across the dog world once their policy was announced.

Delta, as you probably know, cites studies that animals fed raw diets have increased amounts of pathogenic bacteria compared to dogs fed cooked food. Indeed a study out in 2008 found that dogs fed raw diets had increased  levels of salmonella and E. Coli in their stool. However, as the excellent review of this issue published in Whole Dog Journal includes, raw fed dogs also shed higher levels of Clostridium difficile and MRSA, the antibtiotic resistant bacteria that is wrecking havoc in hospitals. It is true that the numbers don’t quite balance: 25% of the cooked-food dogs shed C. difficile, compared to only 12 % of the raw-fed ones, while 77% of the raw-fed dogs shed salmonella compared to 20% of the cooked food dogs.

However, as Whole Dog Journal points out, this one study is not enough for us to truly know the impact of bringing raw food dogs into nursing homes and hospitals. Exhibit one: Dogs in a 2009 study appeared to be picking up pathogens from the health care facilities that they were visiting: Dogs who visited these locations were 4.7 and 2.4 times more likely to have MRSA or C. difficile on their fur or paws. Exhibit 2: As is often the case, there is yet any evidence that being raw-fed was the cause of higher levels of certain types of pathogens in the raw-fed dog group.  There are many, many variables to consider here, and with small sample sizes and nothing but correlational data, we  need to be careful about turning correlations into causes.

As most of my readers know, I tend to look at most issues with as much balance as I can muster. In this case, in a very general sense, we know that 1) just the presence of pets increases the internal production of oxytocin, which boosts the immune system, decreases pain and feelings of isolation and loneliness (among other benefits.) We also know that 2) dogs are good carriers of pathogens like bacteria, on their fur, their tongues and their paws. Thus, there’s a balance here between putting people with compromised health at a higher risk of infection, or depriving them of the health benefits of pet visitations.

As much as I value balance (or perhaps, because of it), I have to say I am more than surprised and disappointed by Delta’s decision. I can’t see that banning raw-fed dogs does anything to decrease the likelihood of pathogens being brought into a facility. What about dogs who rolled outside right before they entered? What about what the people ate, did, or brought something in on their shoes? Delta even suggests that if you have one raw-fed dog at home, you shouldn’t bring in another dog who isn’t if they live in the same home. Really? What about people who eat sushi?  What about dogs who eat soy products? That’s “protein” after all… no tofu for Fido? What about feeding raw vegetables, which are common sources of pathogens?

Of course, dogs who enter health care facilities should have been recently bathed, with special attention paid to cleanliness. But then, so should the people who bring them. And so should the people who work there. But keeping the sick and the elderly in a sterile box, with no opportunity to interact with animals is not, in my mind, good health care. It seems there is a recent trend toward sterilizing the world and I think that is a tragedy. I just learned that all animals are banned from the schools in Madison, Wisconsin, except assistance animals. As a biologist, I find that heart breaking.

What about you? What do you think of Delta’s policy? If you feed raw, do you think about pathogens more than you did beforehand? I’m curious what you think . . .

MEANWHILE, back on the farm: The bees are out in full force this week, busy as . . . (okay, I won’t say it) gathering pollen and nectar to make enough honey to get through the winter. I adore bees, after participating both as a student and a Teaching Assistant in Jeff Baylis’s Field Ethology class in which we watched bees, who had tiny dots of paint on their thoraxes, dance in their hives and had to “translate” their dance and find the location of the food that they were telling their sisters about. As TA, it was my job to mark them, and getting to know bees as individuals changes your perspective when it comes to insects as individuals. I was truly saddened when green dot white dot never came back to the hive one day. As many of you know, bees all over the country are struggling, and it makes me so happy to see such a healthy population of many different species of them at the farm. 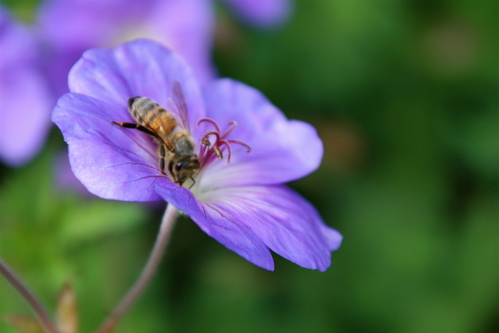 And here’s Willie, watching me take pictures of the flowers and bees, looking (to me) a tad bit concerned. Who know what he is thinking? “Are we ever going to play?” “Why are you pointing that single aggressive black eye at me again?” Fill in the blanks! (We did go work sheep right after that, so life wasn’t too hard . . .) 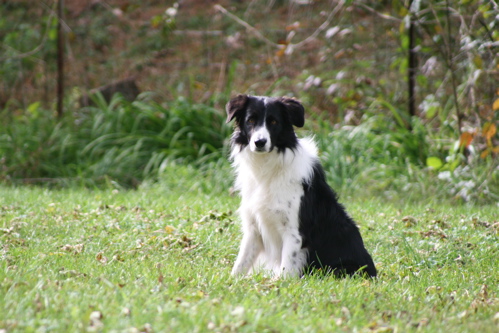