Thanks for the discussion about the use of Body Blocks for teaching Stay, and to re-iterate a comment I made, they work equally well with dogs of all breeds and sizes (but you have to be a bit quicker with some breeds and with small dogs).  If your dog is getting around you to the left or right, then you might be too close. It’s herding dogs that taught me that you have more control at a bit of a distance than if you are right up close. I got away with being quite close in the video in the last post, because the dogs were relatively easy to block, but if you are having trouble, try backing up a bit. It’s also a great way to learn to read dogs (what body part moves first when a dog starts to get up?) and to perfect your timing.

I mentioned in last week’s post that the video showed me working with dogs who had already been taught the first stages of Stay. Someone asked if I’d go over those, so here is me working with a Husky puppy, Anastasia, who has been taught to sit, but not to stay. The steps are simple:

– Be the best game in town with great treats and a lack of distractions that might overwhelm the dog.

– Ask for a sit, give clear visual and verbal signals to the dog to stay (note the drop in my voice) and then release before the dog has a chance to get up. Sometimes I’ll give a dog a treat as it is staying in place the first time I ask, even it is only for half a second, but often that distracts puppies, so with this pup, this first time, I released right away.

– The next times I asked Anatasia to stay I gave her a treat as she was sitting, and made the release boring. The key to a good stay, in my opinion, is to make staying fun, and getting up boring.

See either Family Friendly Dog  Training or  The Puppy Primer for a lot more on this topic, including the importance of working through what I call the 3 D’s: Duration, Distraction & Distance (from you.) Only work on one at a time, and do all you can to set up wins for your dog.

MEANWHILE, back on the farm: The trial was great fun. Good dogs, good people, wonderful hosts and a nippy wind that kept us all on our toes. As predicted, Willie and I suffered a bit from trial-itis, and our runs were much sloppier than when we practiced on the same course all by ourselves a few days before. I’d say we did well, but not great. We did get the highest scores of the runs in the Ranch class, which included a 150 yard outrun, a drive and short cross drive and a pen.  (I ran non-compete though, because in a moment of foolish optimism, I ran in Open 15 + years ago with Luke).

The Good: Willie got 30/30 on his outrun and lift for both runs, with a break-your-heart perfect outrun, way back around the sheep, stopping perfectly on balance, and lifting them slowly and carefully toward me. Several times during the runs I was able to whistle quietly and get instant responses. He was brilliant at the pen, doing everything I asked, instantly. We almost penned the first group (thought we had, and so did the crowd, until a little red lamb fooled us all and lept out, practically on top of me), and didn’t have a chance with the second, but Willie never put a paw wrong. (Out of 30 runs, there was only one pen for the entire day!)

The Bad: The Fetch on the first run, when the sheep are to be brought to you through two free standing gates, was not so gorgeous. On the first run Willie didn’t listen well, and the sheep drifted far to our right. This is a common problem with novice dogs: they are absolutely fixated on bringing the sheep to you, and check out mentally until they’ve had more training and experience. He did much much better on the second run, and brought the sheep directly to me, listening when I flanked him, and we made the fetch panels. We messed up too on the cross drive of the second run: Willie panicked and ran around to twelve o’clock rather than stopping at nine, clearly afraid he’d lose the sheep (who wanted to bolt toward the barn, which was a twelve o’clock). But I knew he did it because he was over his comfort zone, and I know what we need to work on next. For a first trial, he really didn’t mess up much at all. Okay, I’m a tad proud of him. He tried his hardest, and I give him lots of credit.

The Ugly: Happy to report I can’t think of anything in this category, except perhaps the one second in which Willie wasn’t listening and I yelled “Lie Down” three times in a row, until I realized that I could have set off fire bombs and Willie would have kept bringing me the sheep. I’m happy to say that I came to my senses early on, and most of our runs were relatively quiet and controlled. Not perfect mind you, but no chasing of sheep, no rodeos, and many moments of the sheep walking quietly around the course, with Willie listening and pacing well. [I’m laughing as I read this: working a dog on flighty sheep at a trial does not feel, internally, “quite and controlled.” It feels like playing chess with fighter planes. Everything goes so fast you can barely think. The sheep are like deer and every move you and your dog makes is exaggerated ten times from normal. Me and my friends came off the course with our hearts going a mile a minute.]

Here’s Willie at his best, bringing the sheep to me on the fetch. Notice how quiet and slow the sheep are — just the pace you want to get the kind of control you need at a trial. Good boy Willie boy. 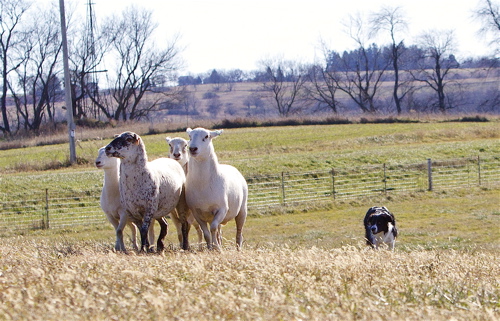