Welcome to an ongoing inquiry about the behavior of people and dogs.
Blog Home >> Animals >> What Do Barks “Mean”

One of our alert readers sent a link to a study done by Kathryn Lord of U. Massachusetts on the “meaning” of barks in a variety of species. The link is to a newspaper article written about the study, complete with comments (mostly irate) about the findings of the work. But the study (which I of course don’t think is a waste of money, contrary to some of the negative comments) brings up some very interesting questions that researchers in animal behavior have been thinking about for decades. The over riding question is this: what, exactly, is the message of vocal communication? Take any species, and ask yourself: is the bark, the growl or the song of a particular animal an expression of the animal’s internal state (expressing fear, or affiliation, or emotions that could lead to aggression) or (and?) are some vocalizations more like the abstract aspects of human language, in that each call refers to something in the environment, external to the sender. Scientists call this “referential communication,” meaning that the call is not just an expression of fear or excitement, but a more abstract phenomenon that refers to an event or object external to the self (as in: “There’s a lion under our tree” or “I just found a specific kind of food.”)

What’s fun for us is that this debate now includes the bark of the domestic dog (and high time I would say!). It is shocking (truly) how little the bark of the domestic dog has been studied–there are, after all, over a thousand individual studies on the call note of the Red-winged Black bird.  But thanks to researchers like Sophia Yin and Kathryn Lord, among others, barking has become a vocalization worth study. Yeah for them!

To summarize with painful simplicity, Sophia Yin and Yin and McCowan did some very interesting work (see (J. of Comparative Psychology, 2002, Vol X, p 189-193 and Animal Behaviour, 2004, Vol 68, p 343-355 respectively) confirming our anecdotal observations that different contexts elicit different kinds of barks from dogs. Harsh, low pitched barks were given most often in “disturbance” situations (stranger at the door) and higher pitched, more tonal barks were given if the dogs were playing or were isolated away from their owners. Yin suggests that these differences are interesting and important, countering the arguments of some others whose published work suggests that dogs are so altered from the wild type that barks have no value for ethological study.  Yeah for Yin for making an excellent argument (as I told my Dissertation committe once, if it’s good enough for Darwin, who was fascinated by domestic dogs, surely it’s good enough for us!)

Lord et al, in her recent paper that got so much press (just Google her name and “dog barks,” argues that barking in domestic dogs is best described as a “mobbing call,” a vocalization seen in a large range of species, given in circumstances in which an individual is often ambivalent (wants to approach but afraid to) and has the same acoustic features of other mobbing calls. She and her co-authors argue that barks are purely expressions of emotional states, and have no “referential function.” That does NOT mean that a great deal of communication can’t be relayed, and that the receivers can’t learn a great deal about the environment by listening to the bark of a social partner, but it does mean that a bark is not saying “Large man approaching from the North” or “Timmy is stuck in the well” but something closer to “Ah Uh, What do I do now?” We can learn that the sound of their bark means there is an intruder, but the dog isn’t necessarily trying to communicate that.. or are they?

This is VERY complicated and wonderful topic. I could write for hours, but I’d better not, so I’ll leave it to you, dear reader, to comment on what you think about this issue.  To prime your thoughts, I’ll add that I’ve never had the impression that barks were anywhere near as nuanced a communication as visual signals in dogs, AND that there is a growing body of research that has found referential communication in a variety of species, including Prairie Dogs and, ironically, a small, beautiful primate called a Vervet, who I am probably watching right now as you read this . . .

Meanwhile, not “back at the farm” but in Africa: As most of you know, I’m in Africa (having written and pre-posted this before I left). This is a photo I took on a previous trip of the famous Vervet Monkeys, known to all students of animal behavior because researchers Seyfarth and Cheney spent over 20 years studying their vocalizations, and showing that they truly do use “referential communication.” They have different alarm signals (and responses) for flying predators (who they run DOWN the tree and hide from), terrestrial predators (who they run UP the tree to escape) and snakes (who they run into the grasses and mob). It’s great research, using lots of playbacks that show that although the young can physically produce all the calls, they give them to the wrong triggers at first (at any flying bird for example) and the adults generally  ignore them until they learn to distinguish an eagle from a vulture. Cool stuff, and seeing the monkeys live, right next to our dinner table (as we might be right now!) is a thrill for me beyond description. Besides, how many male mammals have testicles that are robin’s egg blue? Well, Vervets do… but sorry, this photo is of a Vervet female and her new born infant. They are in a tree that was just a few feet from our table, beside a Masai Warrior who usually stays in the dining area to shoo them off our tables if need be! 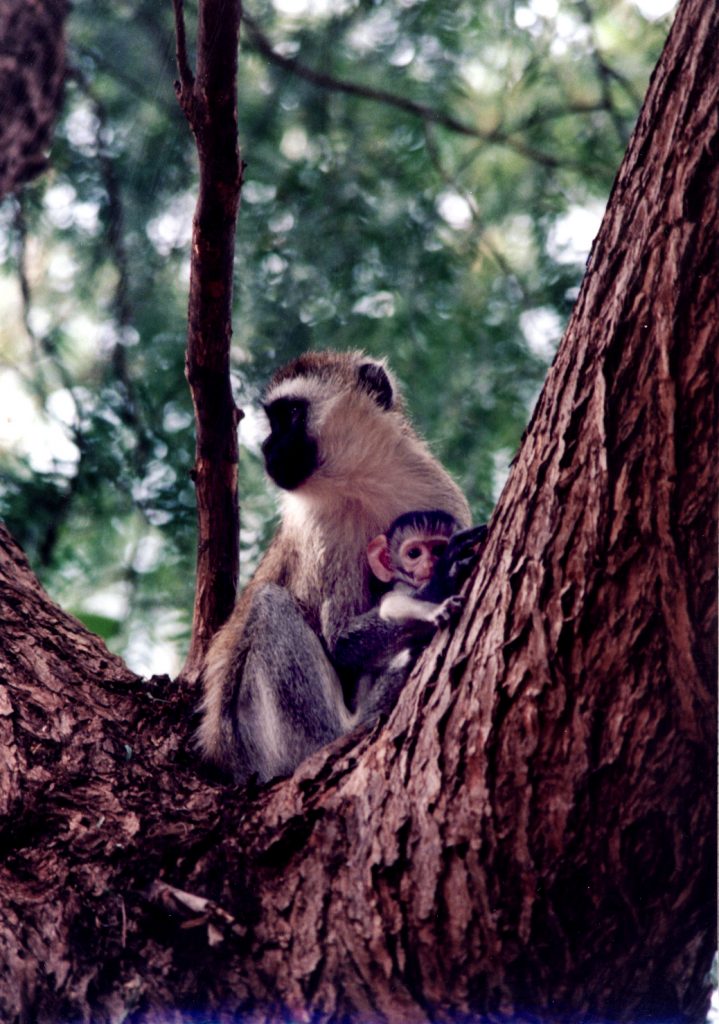