Welcome to an ongoing inquiry about the behavior of people and dogs.
Blog Home >> Animals and the People Who Love Them >> What’s In It for Me?

Lots of dogs go through a “what’s in it for me?” stage (and this stage lasts longer in some dogs than others, right?). Mr. Hope is dancing around it right now, especially when I ask him to come into the house. Several of you asked about ways to handle it; not surprising, since most dogs aren’t like the Lassie on television and don’t automatically do what we want just because we love them.

Here are some of the things I’m doing right now to get Hope to come back into the house from the yard. Of course, “But I don’t wannnaaaaaa” is going to occur in different contexts, but many of the principles here apply to all situations, they just need modifying to fit the problem.

COMING IN MEANS GOING OUT Hope loves loves loves to be outside. He’d happily stay outside all day long if he could. So, sometimes, his reinforcement for coming inside is . . . wait for it . . . going outside. It’s the perfect example of the Premack Principle:  using a high probability behavior to reinforce a low probability one. I can count on him always going outside (high probability) because he loves it there, so I can use that to reinforce him for coming inside (right now it’s a low probability that he’d do it on his own). That means that sometimes when he comes in when asked, I say Good Boy! and dash outside again for a few more minutes.

JEALOUSY IS YOUR FRIEND This only works if there is some other living thing in your house that loves food or toys. But if you do, it’s powerful stuff. When Hope started pausing 20 feet away when I called him to come into the house, I began calling Willie and giving him a treat when he came. Will always comes when called, and I can give him a treat for coming and entering the house whenever I need to. As soon as Hope saw Willie getting a treat,  he instantly came running, only to discover that treats are only available on a limited basis. “Oh, too bad” I say, with sincere sympathy. “You missed the treats this time!” Right now he isn’t getting a treat for coming to the door ‘late,’ but if he then enters the house I’ll give him a treat once he’s inside.

UP THE ANTE I always have a mix of food treats available, from pieces of kibble to real meat. Right now he gets a jack pot of real meat if he comes, first time, when I call him to the door to the house.

MIX IT UP I’m very conscious with Hope of the importance of varying not just the reinforcement schedule, but what Hope gets as a reinforcement. You want to mix it up with any dog, but for some reason it feels more important with Hope than with others I’ve had. He’s pretty independent (okay, for a BC), and I want to condition him early on that if he does what I ask he’ll feel good (versus the more narrow “he’ll get food”). Although I use high value food most of the time for coming into the house, I also use play, effusive praise in which I get down on the ground and laugh like a loon while letting him leap all over me and lick me like a popsicle and again, getting to go back outside.

IF HE WON’T MOVE, YOU SHOULD If all else fails, don’t stand where you are and continue to call (and pollute your cue!) The few times that Hope simply plants his feet and won’t move toward me, or turns and goes farther outside to dig or look for sheep poop to eat (a favorite), I stop saying anything, ensure that I have a great food treat in hand, and go to him. Moving quietly, never scolding, I’ll show him what I’m holding and lure him toward me and back to the house. I’ll shape this, giving him a treat for just a few steps if he was overwhelmed with a distraction (New stinky sheep poop! Fox poop even better! Do you get the pattern here? … there is a reason the word for dog in Navajo translates: “eater of horse poop.”). If the distraction was only so-so, I’ll expect him to come further before I give him the treat.

Are we done yet? Oh my no, he’s just beginning adolescence after all. I expect we’ll work on these things for at least a year. However, he is already much improved; I haven’t had to walk to him more than once or twice in the last 4 days.  Now he comes voluntarily when we move from outside to inside about 75% of the time, even when I don’t call him to come, we just run into the house together. That’s an increase from — I’m guessing here — about 20% of the time, so that’s great progress.

What about you? Tell us your stories of your free spirit, and what you’ve done to work through it. I can’t wait to read what you send, and will be sure to have Hope read them too.

MEANWHILE, back on the farm: We had 2 days of hateful weather on our short vacation, but thankfully the weather cleared and we were able to enjoy Perrot State Park in western Wisconsin for a few days. Jim got to take off his hateful Iron Man brace for part of the day and I even hiked up a steep bluff for a little bit, although it was a far cry from what we intended. But we got time off and a sweet visit with my niece and her new husband. Ummmm, so good to visit with such wonderful people. And we’re related! Go figure.

We returned home to a dying lamb, spent Friday night trying to save it, but to no avail. Turns out, even though we have wormed the sheep on a careful schedule and have alternated wormers, that worms all over the world are developing resistance to worming medicines, and that’s what is happening here.  The little white ewe lamb, the one I bottle raised, took a dive when we were away and was too far gone to save by the time we got back. The next day we started a new worming protocol, aware that no matter what we do it might not be enough. Seems so strange to lose an animal to worms — that just doesn’t happen in dogs (yet) but I understand it’s becoming a problem in horses as well. Gotta give those parasites credit, but I hate losing a lamb to something that it seems like I should be able to prevent. There are 2 lambs I have my eye on, one looks especially thin, but all the others are thriving, and clearly are inherently resistant to worms. I’ll pay special attention to which ewes have resistant lambs when I breed next year.

On a lighter note, here’s the small prairie at the foot of the bluffs at Perrot State Park (on the Mississippi flyway). It’s a beautiful park and a lovely little restored prairie. Hard to imagine that there were 10,000’s of thousands of acres of this across the midwest. 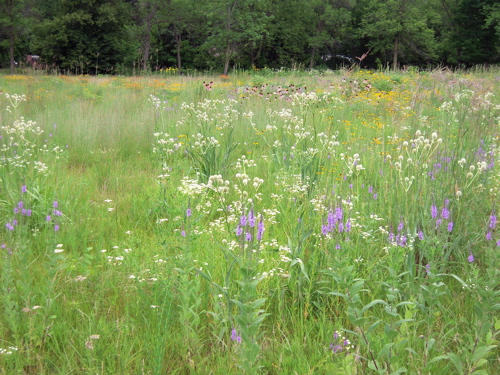 And here’s a happy scene to any farmer: a winter’s worth of hay being delivered to the barn. Thank you Gary, Gus, Gordy and Brad for doing all the work while Jim and I felt guilty (but cooler) in the house! 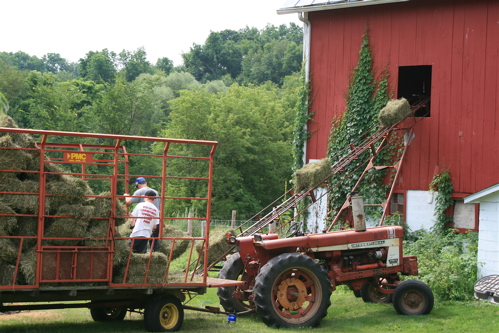 « Barn Red for the 4th
Great Article on Dog-Dog Aggression »