Welcome to an ongoing inquiry about the behavior of people and dogs.
Blog Home >> Animals and the People Who Love Them >> Willie & Sushi, Part II

Thanks to all of you who commented on the saga of Willie and Sushi. (And for those of you who haven’t read the last post, my biggest training/behavior challenge at the moment is Willie’s obsessive herding/stalking of my cat Sushi. I have started a new paradigm, which is to quietly and politely ask him to sit every time he looks at Sushi as if herding. Sounds simple, but so far it’s the only “incompatible behavior” that seems to take him out of obsessive stalking mode.)

Good news, although I hesitate to say that and doom myself with premature optimism. Does Willie ignore Sushi now? Oh no, oh my no. I truly don’t believe that I will ever be able to completely turn around his interest and fascination bordering on obsessive/compulsive behavior around Sushi as a small, herdable animal. However, here’s what’s good:

* By Day 6, Willie is quicker to pull himself away from Sushi and go get a toy. I can’t say that he initiates looking toward her less (wish I could do nothing but take data on this!), but it feels much easier to change his focus. I still often have to ask him to sit 2 or 3 times in a row as he looks toward Sushi, (he’ll sit, then get up and go back to stalking Sushi) but it seems as though he is more likely than before to cut it off and go do something else. I’m considering “Sit/Stay” but not sure it’s the best way to go. Will keep you posted on that.

* I see fewer tongue flicks and less signs of stress on Willie’s face. This feels huge to me. Before when he was stalking Sushi he would often tongue flick and his face had that tense, drawn look you see on stressed dogs and people. (This was new and was what propelled me into finding another way to handle the problem. Broke my heart to see it.) Now when I say “Sit” he is more likely to either keep his mouth closed, or open it as if relaxed once sitting.

* Sushi’s behavior has changed significantly. She is much more likely to come closer to Willie and me if I am in the same room with him. Last night she walked to within a foot of Willie (which she has not done in the past few months) and lay down. Willie was lying down at my feet, and although I couldn’t see his face, his head neither rose nor fell (as if stalking), and I saw no signs of his body tensing. I suspect he was not completely comfortable, because in about a minute he got up and lay down a few feet away. But he never rose up, head fixated laser-like onto Sushi as he been doing lately every time he saw Sushi, even from a long way away.

* Three times in the past two days I have seen Willie sit on his own when he looked toward Sushi. This is huge, needless to say, and resulted in jack pots of legendary proportions (although quiet ones, because if I had gotten too excited Wilie would have gotten overstimulated, and yep, started on the cat again….So I said, quietly, “What a gooooood, goooooood, goooooood boy you are!” Because I’ve conditioned the word ‘good,’ (just like you’d load a clicker), just that word has a profound effect on Will. As I spoke his tail wagged and his mouth opened as he turned his face to me.) Keep in mind the reason this is so good is that sitting seems to take Willie completely out of “herding dog” mode (not true of one of the blog reader’s dogs, see the comments from last blog–another reminder that every dog needs a custom plan!)
* Most importantly, in some ways, I feel ten times more relaxed. I don’t know what will happen in the future, but it’s easy to say “sit” every time he looks at Sushi (as well as continuing our extensive management in which Sushi and Willie are often separated in time and space.) Having a new plan rather than worrying about it every day without knowing what to do is such a relief, isn’t it?

* The only negative so far is that Will’s Sit cue is degrading. It was at about 99.99% compliance, and now it’s not close to that. I realized a few days ago that the only time I was asking him to sit (and dozens of times a day) was when he was looking at Sushi. That seems easy to fix, I’m just adding in sit now in other contexts, going out of my way to ask for it before I through the ball etc (when I usually would have asked for Lie Down).

Again, I’ll keep you posted. (And if you are interested, do read the first post from 12/1 to catch up on this issue… and note that Willie is not following, chasing or simply harassing the cat. He is/was going into a hard-wired, “strong-eyed” BC stalking behavior that appears to be somewhat involuntary and can be impossible to turn off in certain circumstances. There are lots of interesting comments about this from 12/1, I encourage you to read them if you have time.)

Meanwhile, back on the farm: We had our first real snow yesterday. Me and my car had quite the adventure sliding sideways up a hill to yoga (where I’m learning some postures to help with my Sushi allergy!) I haven’t gotten any photos yet, but it’s cold and white and feels very very much like December now. I’m about to go home and decorate cookies for Lassie’s 16th birthday party this Sunday. Looks like she’ll have quite a crowd of admirers, as, of course, she deserves. I’ll post pictures on Monday of the big event.

Here’s a sun rise photo I took with my little camera on Sunday morning from the front porch. May Lassie, and all our old dogs, see another year’s worth of them. . . 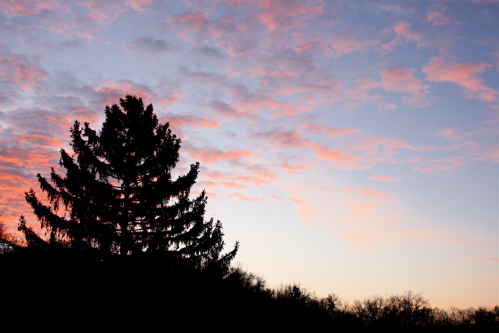 « All “Incompatible Behaviors” are not Equal
Made for Each Other »