Welcome to an ongoing inquiry about the behavior of people and dogs.
Blog Home >> Animals >> Alex and Me, Animal Communication

I’m on way to Bethesda MD to speak at NIH at a forum about the Human-Animal Bond, I’ll write about the other speaker’s talks when I get back later in the week. The talks promise to be very, very interesting. But today I wanted to alert those of you who are interested in animal behavior and animal cognition in general to a new book that has just come out: Alex and Me. It is written by Irene Pepperberg, and is about her relationship with the African Grey Parrot, Alex. Alex is the internationally famous parrot who Dr. Pepperberg taught to use words, not just to describe objects or actions, but to label concepts, like bigger or different. Many had argued that non-human animals were unable, cognitively, to understand something as abstract as a concept (you can’t pick up a “bigger,” now can you?). Alex, Irene and a host of helpers were able to show that Alex’s tiny ‘bird brain’ was more than capable of understanding abstractions, and of using words to communicate thoughts, emotions and intentions. One of my favorite comments from Alex was to a trainer who was clearly becoming impatient with him. “GO AWAY” he finally said to her, seemingly as exasperated with her as she was of him. (To say that Alex held strong opinions is to delve into the land of Understatement.)

Full disclosure here: Irene is a friend of mine, so I can’t pretend to be totally objective about the book. I haven’t even read it yet (just got it), but I know much of the story, including how hard Irene had to battle to have her work taken seriously and to get funding to continue what I think is one of the most important research projects in animal behavior of the last few decades. I can report that the book, as of this morning, is #79 on Amazon, which means it is selling fantastically well. I’m not surprised (though very pleased!)—Alex was perhaps one of the most famous animals of the past few decades, and his death resulted in articles in the NY Times, the Washington Post and papers around the world. Irene told me that after his surprising and untimely death she struggled terribly . . . the press called incessantly for interviews, which was complimentary, but terribly hard for someone who had just lost one of their best friends.

If you are interested in animal cognition and what goes on in the brains of non-human animals, I’d pick up this book. I’ll write more after I’ve gotten back and read it… sounds like perfect Thanksgiving holiday reading to me!

On the home front, it’s deer hunting season in Wisconsin now, which means that walks in the woods are limited to areas that you are 110% are safe. Even then, we all wore blaze orange on Sunday when we went for a walk, thought you’d enjoy seeing Jim, Will and Lassie all tricked out in their classy orange duds. The other photo is from this morning, the first ‘real’ snow besides the dusting we had last week. Not much, about an inch or so, and a far cry from last year’s 9 or 12 inch snow falls that started in mid November and didn’t let up til spring. 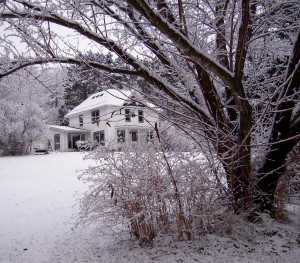 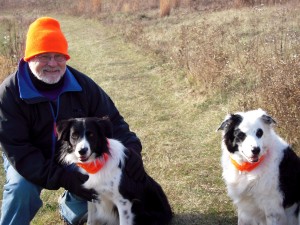 « Boys, Girls and Forever Dogs
The Human/Animal Bond, Can Dogs Get Angry? »