Welcome to an ongoing inquiry about the behavior of people and dogs.
Blog Home >> Animals and the People Who Love Them >> 2015 New Year’s Resolutions?

Ah yes, it’s that time of year. Out with the old, in with the new–with all the dreams and hopes and resolutions that come along with the annual ritual of taking down the old wall calendar and putting up a new one.

I learned long ago that casually made New Year’s resolutions are quickly broken, and, more often than not, lead to feeling badly about yet another thing that we haven’t accomplished. You can read more about this in the New Year’s blog that I wrote in 2010, explaining that effective resolutions should be thought of as commitments that are best kept if 1) they are focused and specific, 2) they are attainable (just like dog training, right?: set yourself up for success) and 3) they are made public.

I do love going back and reading what I’ve written in year’s past. For example, in 2010, one of my commitments was to get Willie working sheep at a greater distance and in front of people more often. Little did I know that he would sustain a severe shoulder injury in February that would keep him from working sheep for the next 15 months. But, last summer we attended three sheepdog clinics and competed in 4 trials. Patience is a virtue Trisha, keep repeating that…

And so, with full awareness that life happens and no one knows what adventures and challenges 2015 will bring, here are my commitments for 2015:

1. DANCE… ( …like no one is watching; thank you Mark Twain, or William Purkey, or whoever said it first.) I’ve been re-reading The Gifts of Imperfection by one of my favorite non-fiction writers, Brené Brown, and am struck by her research that happy people living “wholehearted” lives consider dance, music and laughter to be important items on one’s To Do list. The To Do list that I write each morning has never included such “frivolities” as “dance by yourself in the living room.” Heaven knows I am good at writing lists: I have been known to write a list of the lists that I need to write, but they focus on accomplishments like “Go to the Bank. Take Tootsie to vet. Write blog.” We all have lists like that, right? But what about feeding our spirits and our souls? I would argue that is partly what our dog are for–who has to write “rub your dog’s belly” or “take dogs on a walk” on a To Do list?

However, for 2015, I am intentionally adding: “Dance in the living room to 60’s music three times a week.” I’ve done it before, and Willie thinks it is a hoot. You know where I’m going next:

2. SING… ( …like no one is listening.) I can’t emphasize the importance of the “no one is listening” part here. I can not carry a tune. For that matter, I can’t pick up a tune, nor even find it even if it is lying on the ground in front of me. You do not want to be within 50 yards of me if I am singing. But singing is good for us, as is joining our voices to others as a way of helping us to feel connected to the rest of humanity, so, along with 1. Dancing in the Living Room, I am adding 2. Sing in the car three times a week. This is not the time for you to ask me for a ride. I’m just saying.

3. LAUGH… especially with others. Jim and I now watch my two favorite TV shows together–Big Bang Theory and Whose Line Is It Anyway? I don’t have to write this on my To Do list, it seems to happen all by itself. But I have rarely been to live stand up comedy shows, and I’m putting that on my New Year’s Not-Resolutions-but-Commitments list.

4. MAGGIE/WILLIE/TOOTSIE There are some more traditional commitments for my dogs: Maggie needs to meet more non-Border Collies and get used to them coming into the house, along with more time out and about in varied environments. (Be specific Trisha: Welcome a visiting dog or get Maggie off the farm at least once a week over winter.) Tootsie needs some mental exercise. (Teach her a new trick every month this winter.) Willie needs more time just he and I, and a little less time with Maggie mugging him for attention. (Add evening trick time with Willie into the evening’s activities. He loves tricks and I suspect he misses the time that he and I used to play in the living room together. Three times a week?)

And you? Let me ask first: What are you going to do for YOU this year? I hear so many dog lovers talk about all the things they do for their dogs, including the most common line: “My dogs eat better than I do.” What if this year, you treated yourself with the care and compassion that you give to your dogs? You can think of it as something that actually is for your dogs if you need to–what does your dog want more than you, after all?

Any other specific, attainable and now oh-so-public commitments that you want to make? I, and all the other readers, would love to hear them. (Or stories about resolutions from years past that resulted in something wonderful?  Or abject failure?  All stories are welcome!)

One more thing: I’m going off the grid next week and not turning on anything that has to be charged up every night. Thus, there’ll be no blog until I return to life as we know it on Monday January 12th. I’m taking the week to recharge myself instead of my electronic equipment. I do hope you have a wonderful New Year’s–I’d love to hear about it either this week before I unplug on Friday night, or when I return. Until then, Happy New Year to you all! I wish I could give each and every one of you a big hug.

MEANWHILE, back on the farm: Someone turned the lights on and the sun FINALLY came out after three weeks of clouds and rain. No snow, but at least the deep, squishy mud is gone now that the temperature has gone back to normal.

I made progress on Commitment 4A yesterday, when dear friends brought Tundra over, their Great Pyrenees with a soupcon of Golden Retriever added into the mix. Tundra was busy sniffing and patrolling the perimeter at first (just like Tulip used to do). Isn’t Tundra gorgeous? Thank you Beth and Gary for bringing her over! 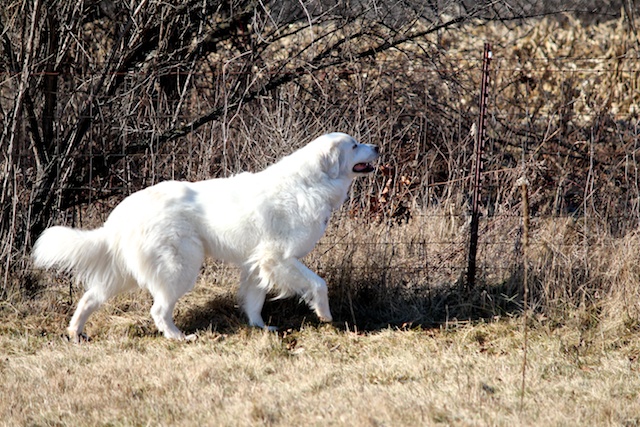 She didn’t want to play with the BCs at first, so Jim got her started playing with him! 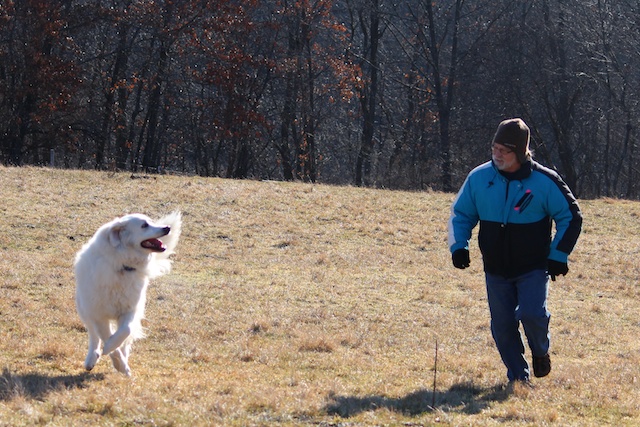 It took a while, but eventually Tundra decided that playing with Maggie & Willie might be fun, and they had some joyful (albeit brief) moments together. I suspect that they will be great playmates once they are better acquainted. Did I mention how wonderful it was for me to have a big, white fluffy dog back at the farm? Hopefully we’ll get to see Tundra more often, we all had such a good time! 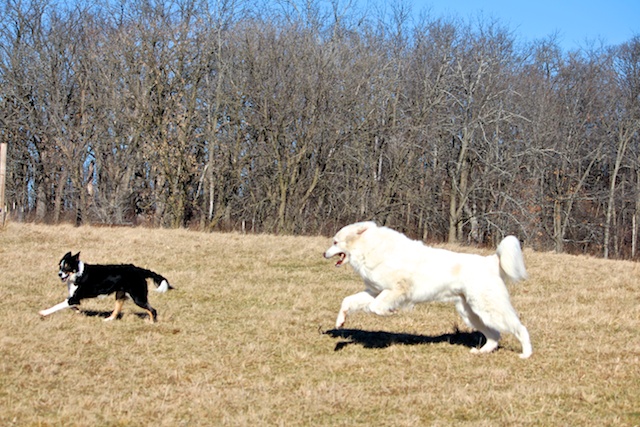