Welcome to an ongoing inquiry about the behavior of people and dogs.
Blog Home >> Dog Behavior >> A Busy Ram, A Wonderful Seminar

First off, thanks to everyone at All About Dogs and all the participants of the seminar in Woodbridge, VA. Every audience has a personality all its own (anyone every done temperament tests on audiences?), and this group was a delight from beginning to end. About 150 people and I spent the weekend in an inquiry about emotions, ethology, people and dogs. And as usual, I learned a lot. Several people reported that they too had played the music from Through A Dog’s Ear, (designed by a musicologist and a veterinary neurologist to soothe and calm dogs) and that they had seen impressive results. One person said her dogs now lay down and go to sleep as soon as she turns on the music. (Don’t expect miracles though… no sound is powerful enough to sedate an exercise-starved puppy who just got out of his crate!)

I remember learning in graduate school about a French researcher (my apologies, I don’t remember the name) who played classical music to pregnant women as they lay down to nap. Unlike puppies, humans can hear well in utero in the last month (at least) of development, and the unborn babies could hear the music being played perfectly well. We heard a tape recording of what the music sounded like in utero… (yep, they put a microphone inside some incredibly agreeable woman!). It sounded like the sounds you hear when you are underwater, which makes perfect sense if you think about it. But you could definitely discern the melody.

It turned out that, after birth, the babies who who heard the music while their mother slept during the last phase of pregnancy would go to sleep almost immediately when the music was played again. That finding supports the claims of the authors of A Dog’s Ear, (and of my own research in the 80’s) that sound can influence the behavior of the receiver, and can act to soothe and relax the individuals who hear it.

Over all, it was a great weekend, thanks to the hosts and a wonderful group of people in the audience. (And oh, those demo dogs! Can I PLEASE take them all home with me?) Here’s a fun shot of all the great folks at All About Dogs: 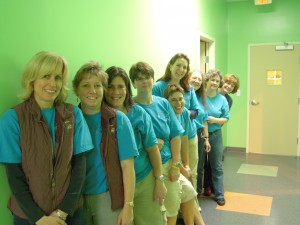 On an altogether completely different note, here’s something else I am happy about. I bought a new, quite expensive ram who was delivered last week, and was a bit concerned because he didn’t seem to be that interested in the ewes. He was also much shorter and smaller than I expected; the breed does tend to be very short in the leg (think Corgi), but I still was surprised at how very short he seemed, based on his hunky photo sent by the breeder. So I was a bit worried: In the past my new rams have been crazed as soon as they were introduced into the flock, but this guy seemed a bit, uh, lackadaisical. I switched his name from Fabio (see his glam shot below) to Ferdinand, after the bull who just wanted to pick flowers. The breeder, a wonderfully responsible woman at Crane Creek, suggested I try what’s called “breeding paint,” which you smear on the ram’s brisket and then gets transferred to the butt of the ewe if she’s been bred. So Monday morning Jim and I mixed up a bright red powder with olive oil (no kidding, someone asked if we added garlic), and smeared it all over the chest and brisket of the ram.

Because I had liked the way the ram had been acting around one of the ewes when we caught him, I went back to check just a few minutes after we smeared on the paint. Sure enough, Brittany had a bright red butt! And this morning I discovered red everywhere… the ram has been a busy boy, and has bred 4 ewes in 24 hours. The only problem is that the barn pen looks like a scene from a slasher movie. I expect people to knock breathlessly on the door to tell me that something is terrible wrong with my flock.

Based on all the above, the perfect name for the ram has now come to me: ROBERT REDFORD, Redford for short. Very very hunky and handsome, a class act all around, but shorter than you expected.

Here’s his hunky glam shot and a shot from “the morning after”: (he’s the one on the far left) 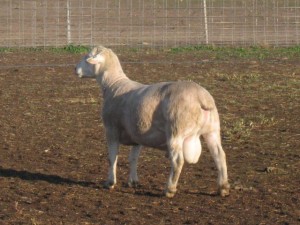 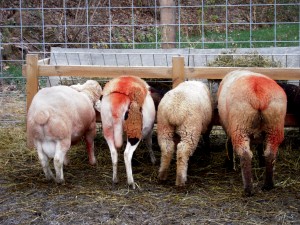 « The miracle of our relationship with dogs
Tales of Two Species, Essays on People and Dogs »