Welcome to an ongoing inquiry about the behavior of people and dogs.
Blog Home >> Animals >> A New Book: Dog Sense by John Bradshaw

There is a new book that just hit the book shelves, John Bradshaw’s Dog Sense. I just started reading it and think it is a book with a lot of value. Here’s a summary from the back of the book of some of its messages: “Don’t be an Alpha,” “Dogs can feel love but not guilt,” “Avoid punishment,” “Look beyond breed,” Respect your dog’s sense.” All good, absolutely. The question, of course, is what does the book add to the conversation, there being a good number of books on the market that say the same thing.

Here’s something, from just the first chapter that I think makes the book worthwhile: Bradshaw begins with a valuable discussion about the genetics of canids and the derivation of the domestic dog. I love his inclusion of the entire group of canids (not just grey wolves) and his important point that just because two species share most of their DNA doesn’t mean they behave in a similar way all the time. Case in point: Common Chimpanzees and Bonobos share 99.6 % of their DNA, yet their social behavior is very different. The social system of chimps is based on male-male coalitions and no small amount of coercion, force and fighting. Bonobos tend to resolve social conflicts through sex — pretty much everyone has sex with everyone else. A primatologist once said it’s like Sweden on steroids (I’m just quoting!). Obviously, individuals of the two species share more than they differ behaviorally, but they are not clones and look and behave more differently than you might expect with a .4% difference in DNA. He uses this information to remind us that wolves and dogs may be the same species, but they are not behavioral clones.

Bradshaw compares the canid genome to a “swiss army knife,” a wonderful way to describe a flexible set of predispositions and tools that can be taken and used when needed (e.g. “faculatively social” coyotes who can live alone or in groups, depending on their prey base.) If you are interested in comparative behavior, this is a valuable section. The book includes chapters titled “Why Dogs Were–Unfortunately–Turned Back into Wolves,” “Stick or Carrots–the Science of Dog Training,” “Canine Brain Power,” and “Emotional (Un)sophistication. I’ll keep reading away, and let you know what I think. Sorry I can’t provide a full book review now, I’m a tad behind what with personal issues, grading exams and finishing up the new book.

Anyone read it all yet? Any other good books you’ve discovered of interest to us all?

MEANWHILE, back on the farm: I gave the word to the vet and sitter to put my ewe, Brittany, down on Friday evening.  There was simply no saving her, she had “twisted gut” which is not treatable in sheep (it is in cows, but not sheep and goats) and so my great sheep vet (Dr. Jeff Kunart) came out and eased her away. The farm sitter, vet student Anna, said she was ready to go. A dear friend who raised dairy goats for years brought out goat milk for the lambs (thank you Donna!)  but as we expected they would have no part of being bottle fed. They’re just too old to learn a new way of feeding. But they had become partially weaned as Brittany declined, and they are just cutting their teeth, so I have hopes that they’ll make it. Other dear friends came over and disposed of Brittany’s body so that Jim and I didn’t have to come home from a funeral and bury a body. Thank you Barb and Dave, we owe you one. It takes a village. And thank all of you for your kind comments about the death of Jim’s sister. The services were beautiful and heart breaking and very special.

Brittany’s orphan lambs won’t grow at the same rate as the other lambs, but they are eating “creep” feed (an area in which the lambs can enter but the ewes can’t) specially designed for young lambs. I’m thankful that I still had some of the ‘baby lamb’ food; they seem to love it and are also eating grass well. I let them out with the flock on Sunday, and they seem to be hanging around my old, noble ewe, Dorothy. I doubt very much she’ll let them nurse, and even if she did, she has barely enough milk for her own twins, but at least they have a ewe to follow.

Willie is wonderful, seems brimming with health. I’m gradually weaning him off his medicine and gradually introducing regular food back into his diet. No sign of GI trouble yet, all paws crossed because his surgery is next Tuesday. The farm is gorgeous right now. I admit I yearn for more time to enjoy it, but I’m savoring every minute I get. The birds and flowers are ridiculously colorful, the yard looks like some 1960’s psychedelic Beatles movie.

Neither of the photographs below are high quality, I had to shoot them through the kitchen window (okay, so it’s not all that clean), but you can still get a sense of how much color there is at the feeders now. There have been as many as 15 Goldfinch, 4 male Indigo Buntings, 6 Rose Breasted Grosbeaks plus Cardinals, Blue Jays, Chickadees, House Finches, Titmice, Wh Breasted Nuthatches, Downy and Hairy Woodpeckers, White-Throated and White-Crowned Sparrows, Orioles, & Red Bellied Woodpeckers at the feeders at the same time. I suspect I’m leaving some out too… After a long winter of little but white, brown and grey, you can imagine what a joy it is to see color again. Between the birds, the tulips and the daffodils, the farm is saturated with color. A magical mystery tour all on its own.

Here are 3 male Indigo Buntings, one of my favorite birds. They are common here in Wisconsin, but tend to sing high up in trees and often don’t look that colorful without the sun on them. The two gold birds are, not surprisingly, Goldfinches. I don’t know why, but our yard is seems to be Goldfinch magnet now.. . we’ve never seen so many at one time. I expect the numbers will dwindle when they get serious about their territories. 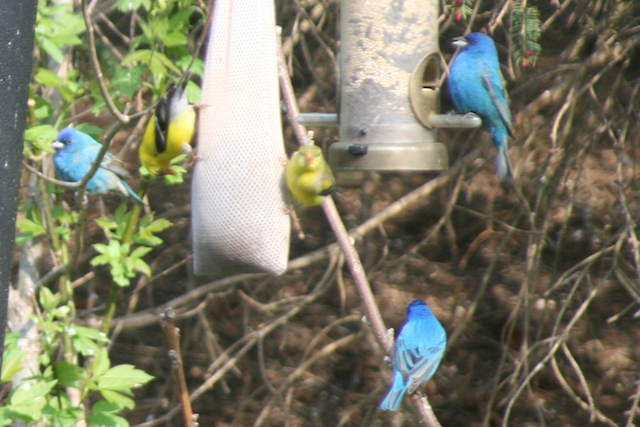 Here’s Mr. Flashy Boy, the Red-Breasted Grosbeak with a male House Finch in the background. The RBGs are gorgeous in person, with high contrast black, white and red radiating around the feeders. 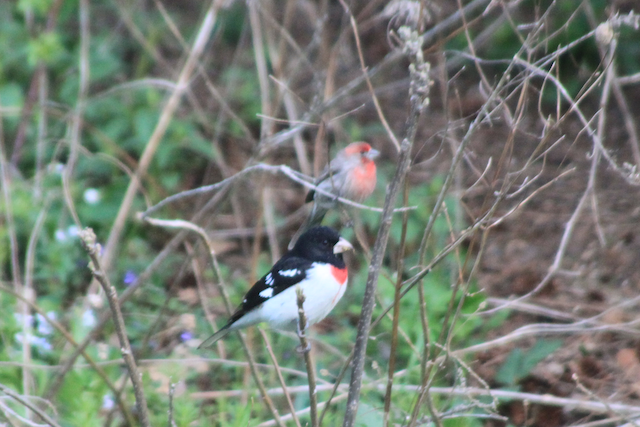 « Sunset at the Farm
Female Dogs More Attentive than Males? »