Welcome to an ongoing inquiry about the behavior of people and dogs.
Blog Home >> Animals and the People Who Love Them >> A New Look at Play Bows 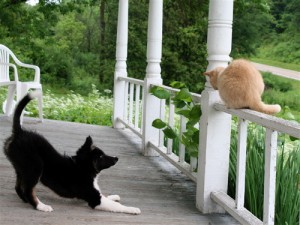 In his seminal work Animal Play, Marc Bekoff argued that play bows (PBs from now on) are example of metacommunication, or communication about communication. His hypothesis that PBs signal playful intentions during a play bout was a good one. I summarized it in an earlier post by saying  “Just as a football jersey means a tackle isn’t true aggression (okay, maybe American football is a bad example?!), play bows signal other dogs that any behavior to follow is meant as play.” (I also talked about PBs in a post in 2008 if you’d like to see more.)

But new research by Byosiere, Grossman and Smuts (in press, Beh’l Processes 2016) tested that and other theories and found some interesting results. Their paper is a lovely example of how science is designed to generate and test hypothesis. It’s also not available to the general public, so I’ve summarized it here. The authors gathered together the hypotheses that have been proposed, and, as all good research should do, generated predictions about what results would or would not support each one. Subsequently they gathered behavioral data on 414 play sessions which included PBs between dyads of 16 dogs. I’ve summarized the hypothesis, predictions and results below:

Re-initiation of play. If PBs function to keep play going, one should see more pauses and passive non-play behavior before PB than after. Results: Players did indeed pause more often before a play bow and were more active after one. Horowitz found a similar result, (2009) that PBs occurred more often after a pause in play than before. [Note this suggests that the hypothesis that Dr. Karen London and I have put forth–that play bows function themselves as pauses that mediate arousal levels, is thus not supported. This is the great part about science; you propose an explanation and year by year, the data begin to catch up and refine your thinking…. Love it!] 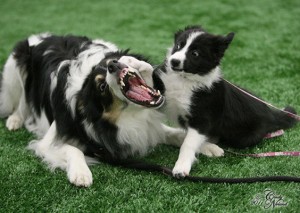 Metacommunication (Bekoff’s Hypothesis). If PBs are a way of saying “don’t take umbrage at my next move, just playing!”, then one should see more “offfensive” behavior after PBs than before (which Bekoff did in his research). Results: This hypothesis was not supported by the data in this study. “Bowers” performed no more or less “offensive” behavior after or before the PBs. The receivers, however, were more likely to mount, bite or chase than the bowers. Why the difference in study results? Bekoff’s (1995) hypothesis was developed after his studies of extremely young dogs, age 3 to 7 weeks. “Bite shakes” were so frequent after PBs in his study that you can see why he would hypothesize that the function of PBs was to avoid miscommunication. However, “bite-shake” is common in young puppies (shockingly so, they look like baby cage fighters on steroids with no referee) and never occurs in appropriate play between adults. It was never observed in this study.

Physical Advantage. Perhaps (it has been suggested by Pellis & Pellis, 1996) that a PB is not so much communication, but a position that allows the bower to better perform “offensive” or “escape” behavior. Bowers did indeed “escape” at higher frequencies after bowing (ie, running away, receiving a muzzle bite or mount), but the authors suggest it functioned more as a way of continuing play. That fits my observations–so often dogs initiate a new play sequence with “stop/start” or a simple dash away that elicits a chase game. Neither does it make sense to me that a play bow would indeed give a dog a physical advantage. I’m thinking of BCs working sheep and dogs running in agility, both with a need to make split-second actions, who virtually never use that posture in either endeavor. (Except my BC Pippy Tay, who would PB and wag her tail to sheep. But then, she wasn’t really herding, she was saying hello. Bless her.)

Synchronizing play behavior. Actions that synchronize behavior are common in social species, from birds who sign duets together, to competing male deer who synchronize their displays during mating season. If PBs function to achieve this, one should see more synchronous behavior after the PB than before. The results did support the prediction generated by this hypothesis–the dogs performed a higher percentage of synchronous behavior after a PB than before (16% versus 5%). 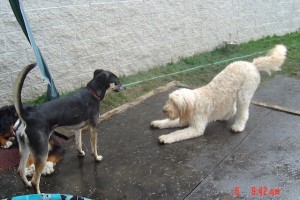 PBs as visual signals. This hypothesis is not exclusive of several of the others, and simply suggests that PB are indeed communicatory signals from one canid to another. Thus, they should be done only when the players are in view of each other, or right after an attention-getting behavior, like barking. The results confirm this hypothesis without a doubt: 409 of the 414 play bows recorded were done when the dogs could see one another. In 3 of the 5 cases “out of view” cases, the PB’er barked during the bow, and in one case the researchers couldn’t see if the dogs could see each other and so couldn’t count it. That left 1 out of 414 instances in which a dog PB’ed when the other dog wasn’t watching. Pretty compelling data, that!

In general, the authors conclude that PBs do not appear to communicate that subsequent behavior should be interpreted as play, versus being mis-interpreted as an aggressive action as has been believed for decades. Rather, the data support that PBs are a visual signal that serve to continue the play bout itself. As do all good researchers, the authors highlight several subsequent lines of inquiry that this research suggests, such as age-related differences and differences based on the familiarity of the dogs in question.

I’m especially interested in that issue–familiar versus unfamiliar. My observations suggest that dogs who are less familiar tend to play bow more to each than familiar dogs do. For example, Maggie and Willie simply never play bow to each other anymore. (Tootsie has never played with any dog, much less PB’ed. I suspect that has to do with her 7+ years in a cage in a puppy mill.)

What about your dogs? I’d love to hear from you about your observations. Of course, our experiences aren’t data, but still, it would be fascinating to hear what your experience has been with your own dogs.

[And don’t forget to send a photo of your dog(s) asleep–silly or charming, laugh out loud funny or oxytocin generating. Photos should probably come in before April 4th to be included. Thanks! I can’t wait to see them…]

MEANWHILE, back on the farm: Oh, the joys of decorating Easter eggs when one is starved for color after a black and white winter! Here’s the result of a morning with good friends D & J: 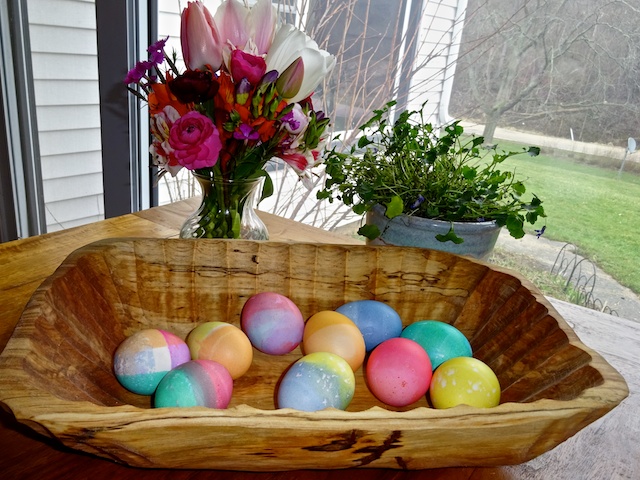 And my favorite part–The Annual Pouring of the Dye into The Sink Ritual: 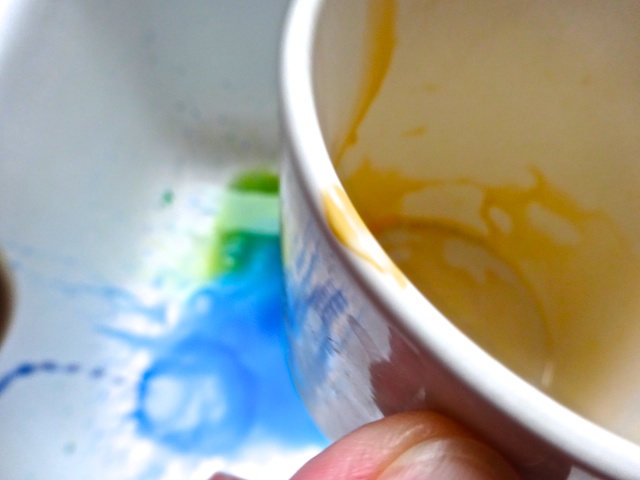 After they left it was time to make an apple pie for Easter dinner with Jim’s mom. (Well, actually, the pie was for desert, but I’m thinking it just might be for my dinner tonight.) Jim helped cut up the apples, so it was a group effort. I concentrated on the crust. I think I’ve finally made enough pies now that I’ve perfected making my own pie crust. But of course, we all know that just by saying that I’ve doomed my next pie, which will be a disaster. [Note to my personal trainer: What do you mean I can’t lose weight and eat pie? I don’t understand what you are saying…] 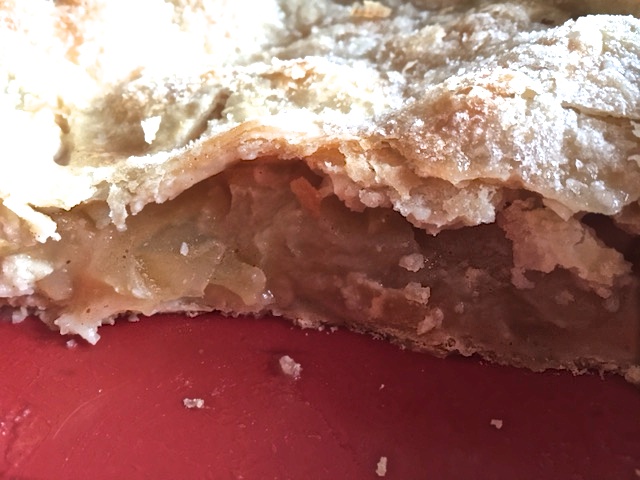 « Animal Dreaming…?
Join Me in Fighting Cancers Shared by People and Dogs »