Welcome to an ongoing inquiry about the behavior of people and dogs.
Blog Home >> Animals and the People Who Love Them >> Accepting That Your Dog Might Be In Pain

Years ago I saw a client whose dog, let’s call him Charlie, entered the room with a neck twisted slightly to the side. It wasn’t extreme, but it was obvious, if you paid attention to the way the dog moved. The owners had brought the dog in because after six years of being a docile and loving dog, he had become aggressive in a variety of contexts. Except after we talked it became clear that there was always a consistent trigger–any time someone, anyone, reached toward Charlie’s collar he growled or lunged forward, teeth flashing. The week before he had finally connected, biting a friend who had reached toward his collar to attach the leash.

Charlie had been left in the car while we talked, and predictably, when the owners began to attach the leash to his collar he lunged forward, ears flat, eyes round. They literally couldn’t get him out of the car until I went to get a slip lead, which we looped around his neck with our hands well out of range. I noticed his neck as we all walked back into the office, and asked if they had seen their veterinarian recently because I suspected that Charlie was in pain.

“Oh no, he’s fine!” they answered. “He eats like a horse and loves to play fetch. We get tired before he does. Really, he couldn’t be in any pain, and besides, we recently took him into the vet clinic for his annual physical and the vet said he was doing great.

“Well, here’s why I asked,” I said. “First of all, if a dog becomes aggressive after having been friendly and docile for its entire life, usually something is going on, often related to the dog’s health. Second, every time Charlie growled or attempted to bite, someone was reaching toward him. The circumstances that you noted may have varied–in the car, in the kitchen, when you tried to get him to come away from the window–but in every case, someone reached toward Charlie right before he began to growl. Third, look at how he is holding his head. Do you see how it’s titled to the right?” Charlie’s owners shook their heads again. “No, I’m sure he’s fine. Really.”

I mention this case because lately I have been wondering why it seems so common for people to dismiss the idea that their dog might be in pain. A good friend got me thinking about it when she stopped by with her adorable, elderly dog. Her vet had suggested that the dog’s weak hind end might be related to arthritis, and to try giving the dog an anti-inflammatory and pain killer to see if it helped. Her first reaction was to dismiss the suggestion that her dog was in pain (although after we talked she called her vet clinic right away).

She is not alone. An experienced veterinarian told me that about 25% of clients who bring in a limping dog say “I don’t think he’s in any pain.” “Well then,” the vet asks, “why would he be limping if he’s not?” I asked a second veterinarian, who also does acupuncture and treats a lot of cancer patients, if she had also experienced owners denying that their dog could be in pain. It seems she’s had a similar experience: She reported that clients often asked if their dog was in pain, but then tended to discount it if she answered that the dog might indeed be in pain. In addition, she found on follow ups that people often stopped giving their dog pain killers very soon after even a major surgery, one that would have their owners moaning for days without medication.

None of us need convincing that pain is important. Besides being at best unpleasant and at worst horrible, pain in companion animals can be an unacknowledged cause of behavior problems, including aggression. Given that most people who take their dog to a vet or behaviorist have no problem believing that animals can feel pain, my question for you is this: Why is it so common for people to dismiss the idea that their pet is in pain? Of course, animals can’t use language to tell us that their stomach aches or their paw hurts, and the symptoms of pain are highly variable. But humans too can be in a lot of pain and say nothing about it and show no visible signs of it to others.

I have no good answers to why it is so common for people to deny that their beloved dog might be in pain. Certainly, in a general sense, our species is adept at denial.  Perhaps we deny pain in pets because our animals can’t complain out loud about it? Because we have such a strong dividing line between “human” and “animal?” Because we tend to discount our own pain often? (Raise your hand if you’ve tried to ignore a pain for a long period of time, then finally found relief and thought “Why did I wait so long to deal with this?! I’d write more on this, but both of my hands are raised up in the air….) Here’s an engaging post, “Denying Denial”,  by Kirby Farrel that might explain why we are so good at it: He argues that it’s a useful way of coping, and sometimes has its benefits.

And so, dear reader, I toss this question out to you. Why it is that behaviorists and veterinarians find that owners are often resistant to believing that their pet is in pain? I await your wisdom.

MEANWHILE, back on the farm: I’m calling this The Summer of Everything. Move the business office. Redecorate the living room. Build a bedroom on top of the hill. Take the gardens to another level. Finish the memoir. Busy yes, but lots good.  And, soon… Spain! I am beyond excited to go to Spain, in less than a month from now. Por favor, ven y saludar en Madrid los días 19 y 20 de septiembre!

Speaking of knowing what’s going on inside your dog–here’s Maggie after a long play session with Willie. You can see she’s very hot by the length and curl in her tongue. She tends to heat up fast, so we watch her carefully, but at the same time we need and want to increase her heat tolerance a bit. So we’re always walking a balance with her, not letting her get too hot without over protecting her and making her even less heat tolerant. I suspect she’s a tad uncomfortable right now, and wouldn’t push her any farther than this. But she is getting more heat tolerant as we work on it, which is important here when it can be so hot and humid in summer. 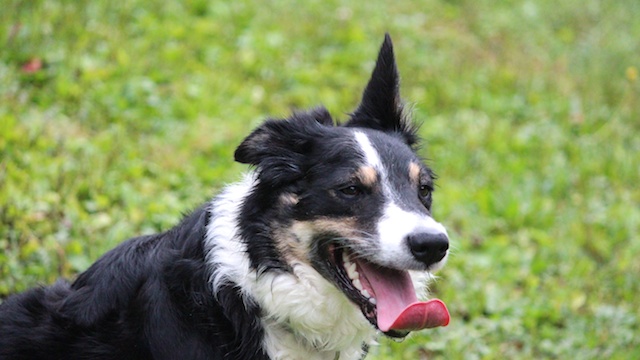