Welcome to an ongoing inquiry about the behavior of people and dogs.
Blog Home >> Border Collies >> Adopting Littermates… (Don’t)

The title of this post is a bit strong, but I do want to caution people from adopting two dogs from the same litter because “it’s easier” to raise two at once (ask someone with twins if it’s easier than having one child) or “we don’t want our dog to be lonely.” (Because you might be if the dogs are so enchanted with each other that they ignore you).

I’m writing this now because we have gotten a number of questions about this issue lately: “Someone told me I shouldn’t adopt dogs from the same litter, is that true?” Far be it from me to say what you should or shouldn’t do, but there are a lot of red flags related to getting pups from the same batch. Before I say more, I should add that I’ve looked and asked around for any research on this issue and haven’t found a thing that supports (or disputes) what some people call “litter mate syndrome.” (If you are aware of any good research, please let us all know.) What I’m writing here is based on my experience and the anecdotes of others. I’d love it if someday someone did some good research on this to see if our beliefs are well-founded.

The most common reason given for not adopting two pups from the same litter is that they will “bond better” with each other than with you. This intuitively makes sense, in that the pups have already had the closest and most intimate experience with each other, and often during important phases of socialization. You’re already fighting the fact that you’re an alien (aka, another species) and are inherently confusing to your dog.

I’m not sure we know exactly how bonded these pups become with their human family (no doubt it varies tremendously), but functionally what I’ve seen is that the pups are simply harder to train. It’s just hard to get their attention. They are so busy playing with each other (or squabbling, more on that later), that you become the odd man out. I suspect this indeed does have to do with social bonding to some extent, but I have seen pups of a duo who clearly adored their humans. Adored them. They just didn’t listen to them. It seems harder to get their attention, harder to teach them emotional control and harder to teach them boundaries. I imagine that we humans become more like party poopers that interfere in their fun with their playmates, not to mention that we are more tiring, because they have to learn a foreign language in order to communicate with us.

The other problem I’ve seen with pups from the same litter relates to bullying or aggression between the dogs. It seems as though this happens more often with litter mates, but I wish we had some good, objective research on it. I simply can’t say definitely that this happens more with litter mates, but it does appear to. I have seen some nasty cases of bullying or outright aggression between dogs of the same litter, and it feels as though it is more common than between dogs who come into the family from different litters. (Or perhaps are adopted at different times? I’m not sure we can say exactly what the factors are yet.)

That said, I should add that there are numerous cases in which people have adopted litter mates without any problems at all. What happens on so many factors, including the temperament of the pups, their early experience, etc. etc. I would say though, that if you want all the odds on your side, you might hesitate before getting two pups from the same litter if you have a choice or can’t follow the suggestions below.

What if you already have litter mates? Perhaps you’re reading this while two pups from the same litter are playing on the floor beside you. Or perhaps you have working dogs and truly need to keep a number of pups from the same litter until you can evaluate who would be the best prospect. I think the standard advice is sound here: Don’t give the puppies free and constant access to each other. (I just heard from someone that her breeder recommended she never EVER let the dogs even see each other. Do I need to mention that I think that is a bit extreme?) Let them sleep in different areas (okay, make them sleep in different areas) and do lots of one-on-one training. Spend a lot of time playing with each pup by itself, and use play as an important part of your positive reinforcement. (This is also a great way to teach emotional control. See Play Together, Stay Together for more on this topic.)

If you’d like to read more about adopting littermates, I really like Pat Miller’s excellent article in Whole Dog Journal about it.) What about you? Have you ever had young pups from the same litter? What was your experience? I’d love to hear.

MEANWHILE, back on the farm: Willie, Maggie and Tootsie are all sprawled out on the floor as I write this. Tootsie on a comfy rug, the BCs happy to be on the cool tile of the dining room floor. We’re all enjoying being home after spending two lovely days at the WWSDA Labor Day trial in Hudson, WI. The trial is run on a new (and much improved) course that is stunningly gorgeous (we were in Scotland?) and challenging, in the best of all possible ways. I wasn’t sure I’d run Willie after both his foreleg surgery and his coming up lame on a hind leg a few days before the trial, but he seemed sound for a few days before it so we gave it a go. We ran in the Pro-Novice class, one step down from Open, but the outrun was still very challenging. A long way away, with lots of hills and valleys where the dogs could lose sight of the sheep and get lost. How’d we do? In summary, Willie did pretty horribly his first run; he got boggled up finding the sheep and never settled (or listened) after that. It was not our finest hour. The second run was the opposite: His outrun was perfect, and the rest of the run was really good. He settled and listened and if I was a better handler would have done the fetch and drive perfectly. But the lines were good and we both had a great time. (Except for the last task, which was Maltese Cross instead of the usual pen. We’ve never even seen one before and acted like it I’m afraid.) However, overall it was a really good run. It began to pour as soon as Willie and I began our run, and everyone, even Jim, scurried away to close car windows, get dogs under cover etc. I’m calling it our phantom run, because no one but Willie and I saw it. Of course, isn’t that always the way? But I left the field very happy and proud of him.

Here are two photos of the Pro-Novice course. The first gives you some idea of the scope of the trial. The handler is on the right (you have to stay there until the last phase of the course), the sheep and dog are in front of the white panels in the center, having already been “lifted” by the dog and brought through the “fetch panels. 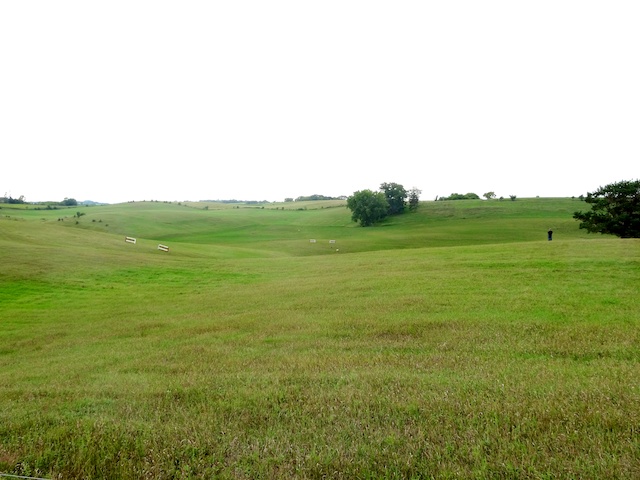 Here’s the same photo cropped, so that you can get a better sense of where the sheep were set out for the dog’s outrun. If you look carefully you can just barely see a person behind the fetch gates (Wendy, who set out all the sheep and did a brilliant job). That’s about where the sheep were held. You stand at the post and send your dog, in what you hope is a big, sweeping half circle to the other side of the sheep. I have to tell you that when your little dog does it right, and runs so far away from you that you can barely see him, settles behind the sheep and brings them to you in a well-controlled straight line, it makes your heart so big that sometimes I think it can barely be contained inside your chest. 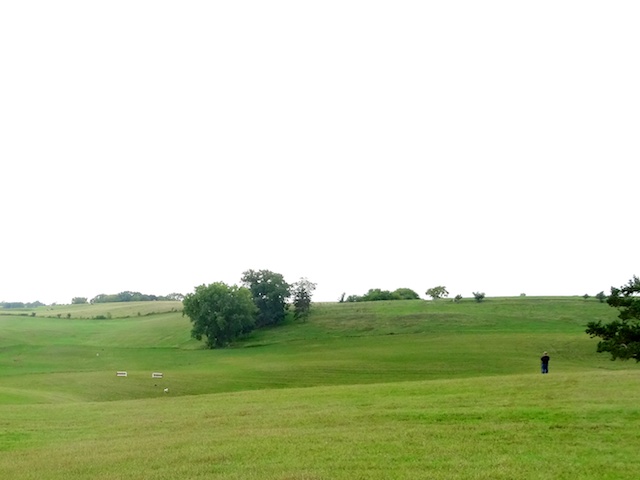 « Dog Food Logic: The Science of Canine Nutrition
Ouch: The dangers of sticks as dog toys. »