Welcome to an ongoing inquiry about the behavior of people and dogs.
Blog Home >> Animals and the People Who Love Them >> Adventures at the Midwest Championship Sheepdog Trial

Holy Moly, Batman, the Wisconsin Working Stockdog Labor Day Trial really is held on the biggest, baddest course in the Midwest. What you see below is only part of it, I don’t have a wide enough angle to show you the whole thing. The dog and handlers begin the course standing far to the right, way out of the photo, and in the Open class, the sheep are actually set out far on the left, up at the top of the hill you can see at the edge of the picture. 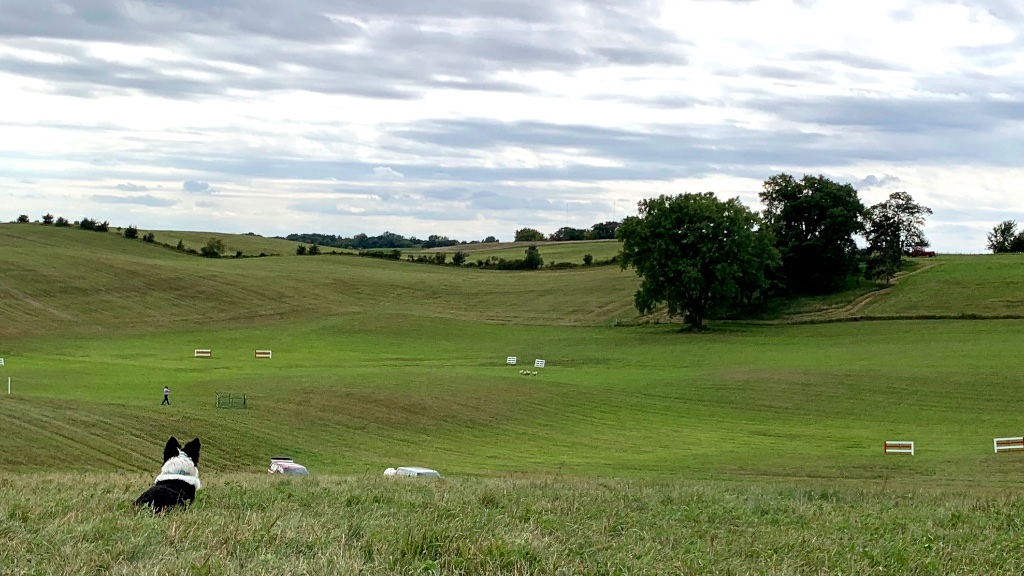 Here’s a recap of our adventures:

First Run, The Good: Maggie did okay, in her second attempt at running on an Open course, on a ridiculously challenging course with what turned out to be extremely difficult sheep. She found the sheep, which in itself was a major victory. I couldn’t see her for about 2/3 of her run because of the hills, and at one point thought she’d spun off over the horizon. But she appeared above the sheep, a tiny black dot in the distance, ran a bit too far but then turned, and found the sheep. Given that the sheep were set out about 450-475 yards away, that was no small accomplishment.

Maggie brought the flock to me, although not a straight line as desired, and got halfway through the drive before she timed out. Given that almost 1/3 of the dogs, many with more experience than Maggie,  got letters instead of numbers (DQ for disqualified or RT for retired by the handler), getting any points at all in this stage of her trail experience was something to be happy about.

First Run, The Bad: At one heart dropping moment, I thought I’d lost my dog, because the hills made it impossible for me to see where she was. I knew that might happen, because sending her that way, to the left, meant she’d be out of my sight for quite a long time. However, sending her the other way meant she might end up getting stuck on the sheep in “set out pens,” which would happen behind a grove of trees out of my sight completely. Pick your poison. I decided to send her left, and regretted it greatly at one point when she disappeared from view for, uh, ever. Finally, I saw a tiny black blur a million miles away, way way off course, and literally, and terrifyingly, I thought that one of the loves of my life was simply going to run over the horizon and I’d never see her. I began yelling MAGGIE! MAGGIE! LIE DOWN!

Little did I know that the spectators could see what I couldn’t, that Maggie had come around behind the sheep, at first too far around, but eventually correcting herself, and bringing them to me.

Maggie never lost control of the sheep, like so many other dogs did, but neither could she move them very well. The sheep were as “heavy” as sheep can be, interested only in stuffing grass into their mouths, and Maggie had a terrible time keeping them moving. One ewe turned to confront Maggie often, and although Maggie kept trying her best, it was stop, start, stop, start all the way around. Honestly, it went so slowly that I actually started wool gathering for a moment (“Where did Maggie actually go on her outrun anyway?”) until I realized, that uh, I was running a dog . I wouldn’t have been surprised if the judge hadn’t been yawning. But this is my Maggie, who hasn’t learned yet how to enjoy pushing heavy sheep, and wants to play defense, not offense.

The Never Got Ugly: Thank heavens, my Maggie did not disappear from my life, she did find the sheep. Although I got a particularly heavy group of sheep, much worse than some, we did not get the sheep some others got, who insisted on splitting into two groups, both led by a race horse masquerading as a ewe, but going in opposite directions. (Actually, Maggie probably could have handled that better now that I think about it, she loves flighty sheep). Maggie got a total of 21 points, a ridiculously low number of points, but points it was, and the fact that almost a third of the dogs didn’t get any at all is a kind of a victory in itself.

Second Run, Next Day, all Ugly. Well, could have been worse, as you’ll see. In the photo below I’ve just sent Maggie off for our next try a day later.  The sheep were moving much better, and I thought we had a good chance of having a decent run. 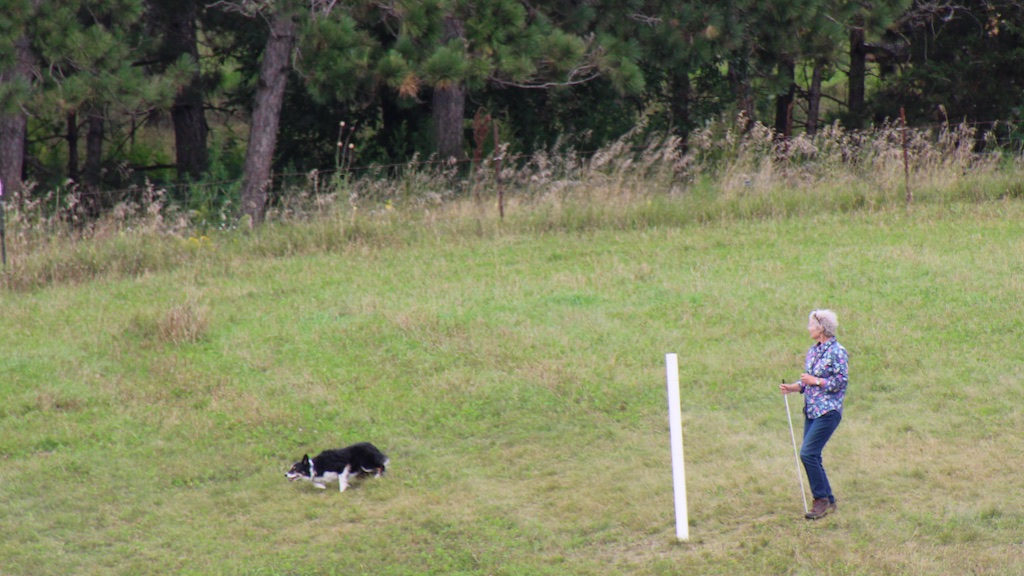 Well, learn I did. The hard way. Maggie ran way, way wide, so wide I thought she’d spiral into the stratosphere. I stopped her, she listened, and I asked her to walk up at least in the direction of the sheep. At this point, the sheep were out of her sight, a good 400/500 yards to her left. I then asked her to flank again around in a counter clockwise direction, and off she went, flying wide to the right, and doing exactly what I was afraid of the day before. My beloved, cherished dog ran to the top of the right hand field, and disappeared over the horizon, running like a deer, hundreds and hundreds of yards away.

See the big tree on the horizon on the left? Maggie disappeared over the horizon just to the left of that. Keep in mind that I’m actually out of the picture, far to the right. 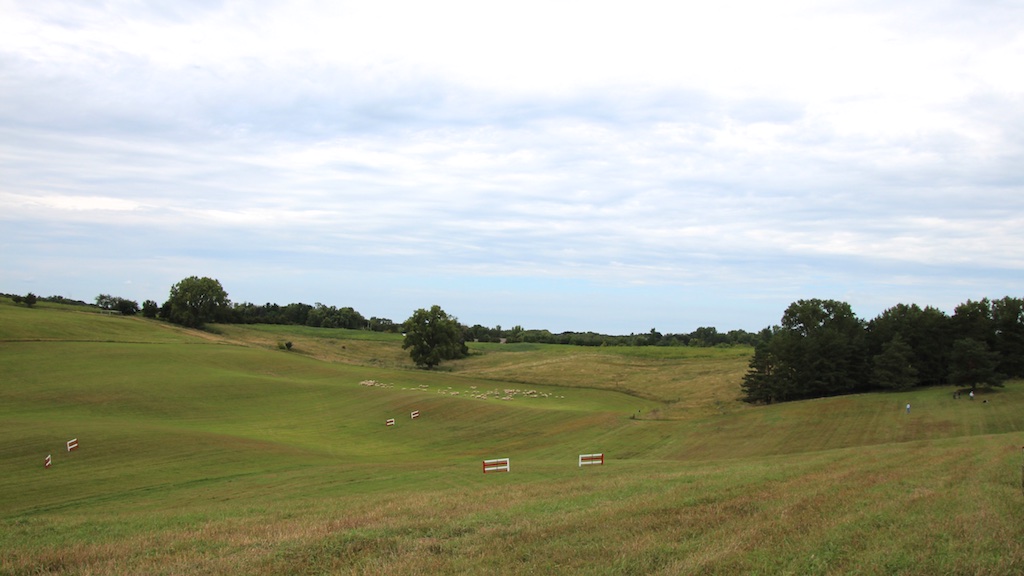 This was pretty much my worse nightmare about running in the Open class. I whistled and yelled as loud as I could for Maggie to stop, but this time she kept running. I called and called for her. Nothing. Minute after minute after minute. Eventually, one of the trial organizers ran me up the steep, endless hill in a ATV. When we got to the top and discovered that Maggie had run into a huge field of thigh high weeds, my heart sunk. I thought I might never see my dog again. But when we turned left, about 100 yards through the weeds, we found Maggie staring at into a large pen that held the main group of sheep. There she was, no doubt wondering how the heck she could get them out to bring them to me.

I don’t need to tell you how relieved I was to see her. Maggie and I were offered a ride back to the other side of the course, but elected to walk the 1/2 mile back to decompress. I had no idea how Maggie was feeling at that point about the whole misadventure, but one point, when we stopped and sat down to watch another run, Maggie licked and licked and licked my face. (Insert heart swelling music here.)

Thanks to the friends and experienced handlers who assured me that running in Open your first season is not just about training your dog, but about how to handle a dog in Open. Needless to say, it’s not just your dog that needs the training. I learned from some top trainers (thank you Jennifer and Gordon) about all the things I had done wrong–I should have sent her left again in the first place, should handled her closer to the sheep before flanking her again. Other lessons: Trust my gut (which said go left), not my head (which said would be useful to the right); trust my dog, who was not taking off into space but going for a group of sheep I couldn’t see; and practice handling Maggie so that when she goes to the wrong place I can move her around in space to find the right sheep, even if 500-700 yards away. You can see we have our work cut out for us.

Overall, the Good: With one exception (not stopping at the top of the field before disappearing), Maggie did everything I asked, under very challenging circumstances. She is a better dog than I deserve, but we both are doing the best we can. She needs to learn to push sheep who don’t want to move, I need to learn to make good decisions on the trial field under pressure. Neither of us are inherently good at those things, but we both are equally committed to trying to do our best. They say you need to run a dog in Open for an entire season before you can get your legs underneath you–we’ll give it a try through next season and see how we are doing. We have three more trials this year; I’ll keep you posted.

The Other Good: On Sunday, when the Intermediate class ran, Maggie and I got to work sheep, picking them up at the end of their run and moving up a steep hill into the “exhaust pen” where they get to rest, drink and eat hay. We both loved getting to do some practical sheep work, along with chatting with top handler Kerry Watt and admiring her dog Ava, who is the dog in first photograph. Tough life, huh?

Here’s another view of the field, when the flock was allowed to graze during a break. 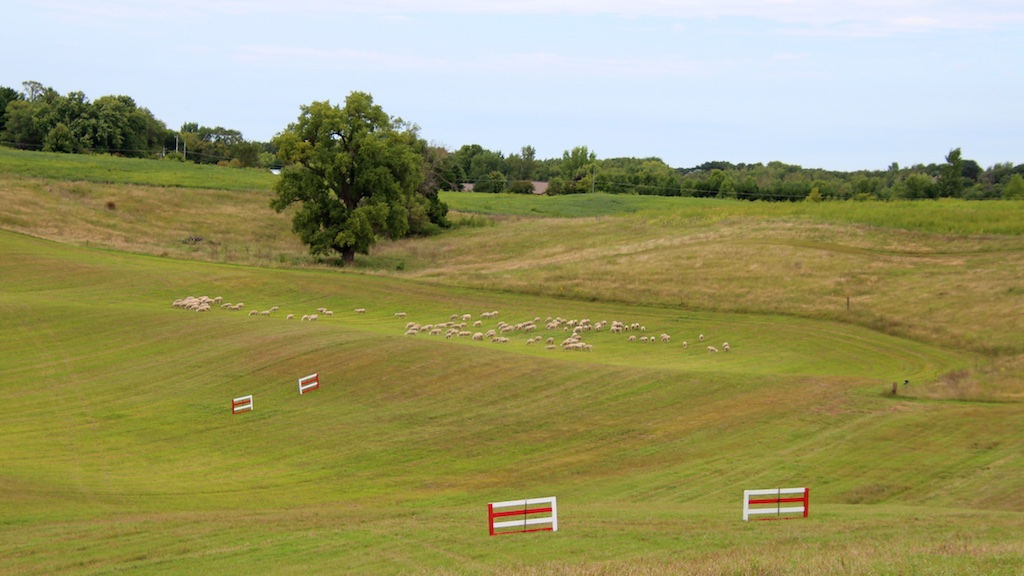 Maggie also got to play with some other dogs this weekend, something I know that she misses a lot now that Willie is gone. We’re not ready for another dog right now, but we know that is in the future sometime. Here’s Jennifer Boznos’ Dot leaping over Susan Garrett’s Cass. 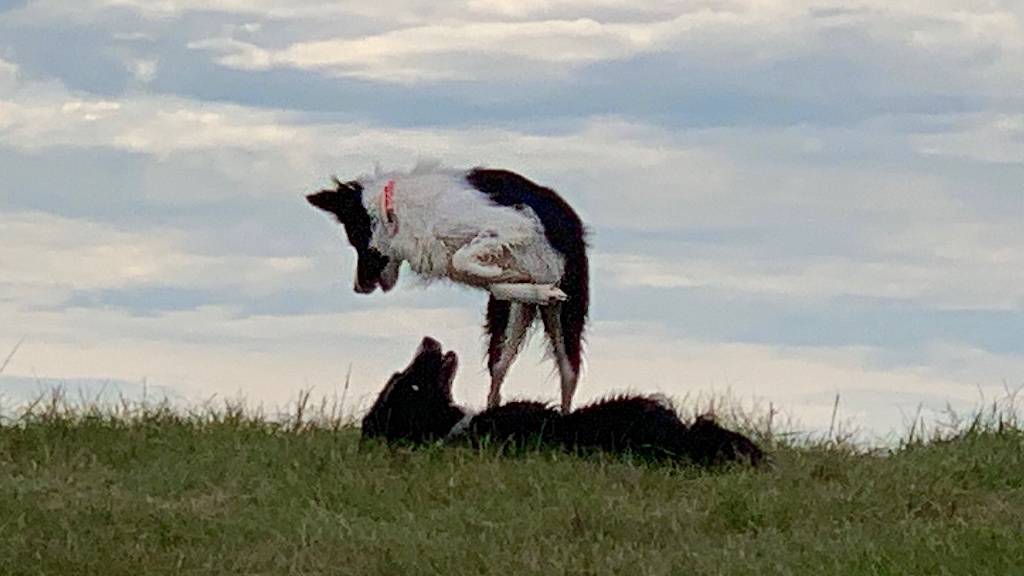 Overall, it was a wonderful weekend. Jim was a wonderful partner, volunteering to help at the gate and the set out pens while I joined others and did a bit of announcing. There were lots of good friends to connect with, a great, well-run trial put on by incredibly hard-working people, fun vendors, yummy food, and most of all, astoundingly talented dogs and handlers. If you’ve never seen a Double Lift Competition (held on Labor Day itself), well, then you’ve never really lived. And the area around the trial is great fun–Hudson, WI is a happening little town (I love you San Pedro Cafe), and the Willow River Falls in the Willow River State Park are gorgeous.

I hope you had a good weekend too, and are looking forward to a glorious fall.

« Communication, Plus and Minus.
Spay-Neuter or De Sex? »