Welcome to an ongoing inquiry about the behavior of people and dogs.
Blog Home >> Animals and the People Who Love Them >> Aggression, Fear and Gut Health. . . Joined at the Hip?

She was a lovely German Shepherd, even after she squatted in my office and spewed stinky diarrhea all over the rug. Her owners told me she’d always had digestive problems, but her aggression toward strangers hadn’t begun until she was about five months old. I can’t remember her name, because she could have been any one of hundreds of dogs I saw who had problematic gut health and who were also extremely fearful. That fear often led to “aggression,” translated as agitated barking, snarling or even biting when confronted with unfamiliar dogs or people. 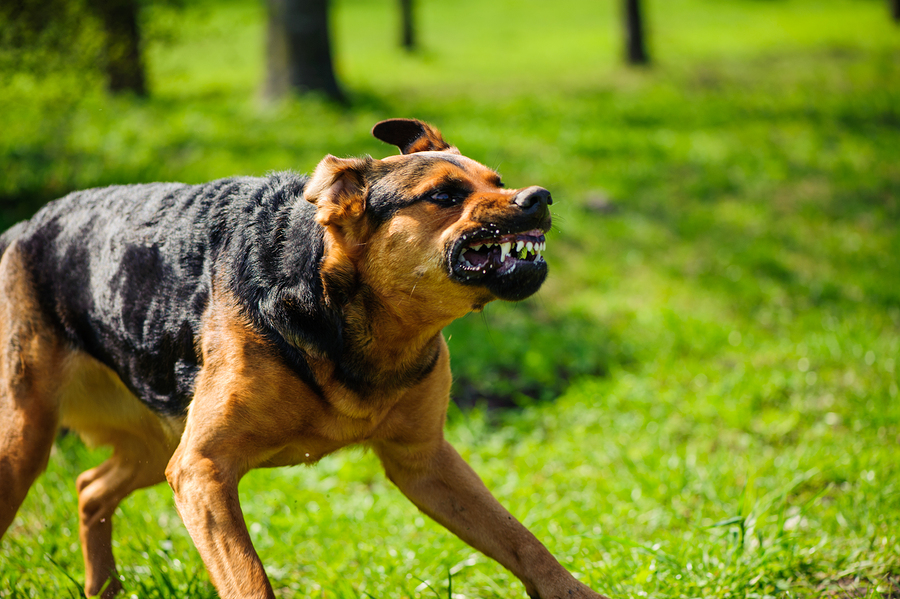 An “Aggressive” dog I’d classify as “terrified” (not my client’s dog!)

Not to mention my Willie, whose projectile diarrhea resulted in my writing three of the best pages of my career. You’ll never read those pages in The Education of Will, because the editor begged me to take them out, so effective were they at evoking the reality of liquid shit. For some reason she thought that readers might be put off . . . And, of course, Willie indeed became reactive to unfamiliar dogs around early adolescence.

I bring this up now because our knowledge of the connection between gut health, brain and behavior is growing exponentially.  That’s true for both human and canine health, and if you’re interested in helping a dog who is fearful or over reactive, it’s important information. I also mention it now because of a thread on the Certified Applied Animal Behaviorists email list about the use of probiotics as a way of treating/modulating problem behavior due to its effect on the microbiota of the gut. That led to a great set of references from Dan Estepp of Animal Behavior Associates.

First, Bravo et. al. published a study in 2011 whose title pretty much sums up their findings: “Ingestion of Lactobacillus strain regulates emotional behavior and central GABA receptor expression in a mouse via the vagus nerve.” You can read the full text in the link, although I suspect I don’t need to warn you that it’s not beach reading. But the conclusions are of great interest–that what they call the gut-brain-HPA axis pathway, in part mediated by the neurotransmitter GABA, is significantly effected by the microbes in the gut, which can be altered by the addition of a particular strain of Lactobacillus. In other words, what’s in the gut effects behavior, and modifying what’s in the gut can modify the behavior as well.

A more recent literature review by Clapp et. al. (2017) found that gut health in a variety of species, including humans, are affected by the microorganisms living in the gut, and that the administration of probiotics could significantly increase gut health, and accordingly decrease symptoms of anxiety and depression. However, the authors include an important cautionary note: Probiotics are not a regulated substance, and at the moment it is impossible to know exactly what is included in a purchased commercial product. They briefly discuss the potential of natural probiotics (yogurt, kefir, for example) as another way of stimulating gut health. 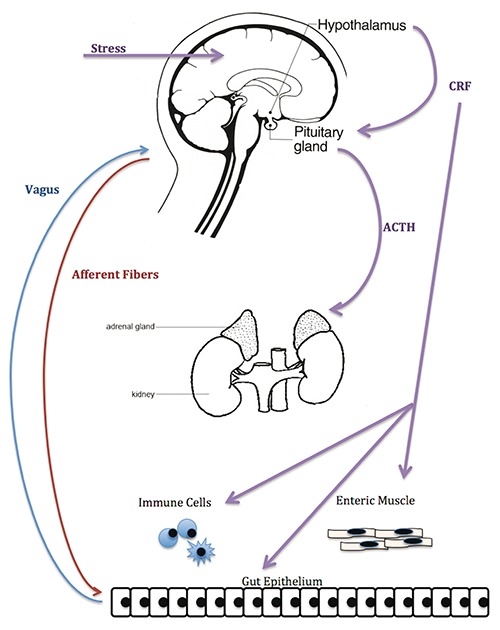 Another study by Kirchoff et. al. (you may have to search for “probiotics, aggression, dogs), found “statistical associations between aggression status and the gut microbiome”, based on a small number of dogs rescued from dog fighting rings by the ASPCA. The plot thickens.

Thus, it’s not surprising that we are seeing the potential of probiotics in managing canine behavior problems. Purina has recently come out with that very product, called Calming Care. I first heard about it from a friend whose Cavalier’s normally sweet behavior morphed into something altogether different when on steroids critical to his survival. Once on the probiotics his behavior dramatically returned to normal, a huge relief to his owner. At that point in time, my own Maggie was still pretty much a wreck after Willie’s death (heightened startle response, hand shy (hadn’t seen that before), hesitant on sheep, whining, no interest in play) and one of her vets had just received a sample of Calming Care. We decided to give it a try.

She’s been on it for three weeks, and yes, she is better. Much much better. But so much else has changed that I couldn’t possibly say if it has had a significant effect on her.

Curious, I reached out to my applied animal behaviorist colleagues to see if they’ve had any experience with Calming Care. One noted she had two clients whose dogs were on it, both with serious aggression issues. (But I don’t know any more about motivation or context.) One dog went to sleep for two hours after administration, but then woke up ready to fight. The other’s behavior didn’t change. Another second colleague is using it in a shelter setting, and thinks it might be helpful, but again, hard to know with so many confounding factors.

Conclusion? Argh, too early for much of one. However, what we know for sure is that gut health and the microflora in it are tightly linked to the brain and behavior. After that we’re just beginning to scratch the surface. Given that, I wouldn’t necessarily recommend any new product at the moment, given how little we really know, but I would recommend paying a lot of attention to this issue, especially if you work or live with a dog with anxiety or fearful behavior, including “aggression”. If that describes your dog, it’s worth doing more research, and/or talking with your vet or a behaviorist about ways you might support your dog’s gut health.

Lucky for us, there’s an entire Webinar on this very topic, originally broadcast in March from the Behavior Education Network. All BEN offerings are free if listened to live, but you do have to pay for them if you’re not a member after the fact. I look forward to listening myself sometime soon, and just as much to hearing about your own thoughts and experiences on this issue. Have you seen a correlation with a dog with gut issues as well as behavior issues? Tried any probiotics? Other physiological changes? I look forward to learning more.

MEANWHILE, back on the farm: Spring is busting out all over 🎼 “… all over the meadow and the hill.” (Sorry Carousel.) A musical note is relevant here: As I write from inside the house I can hear the songs of a Rose -breasted Grosbeak, a Blue-winged Warbler, a Yellow Warbler, a Wood PeWee, a Robin, a House Wren. I pretty much guarantee you there are a lot more, but those are the ones I know best and hear well.

Flowers and flower buds are everywhere too. Here’s the white version of bleeding heart, my favorite: 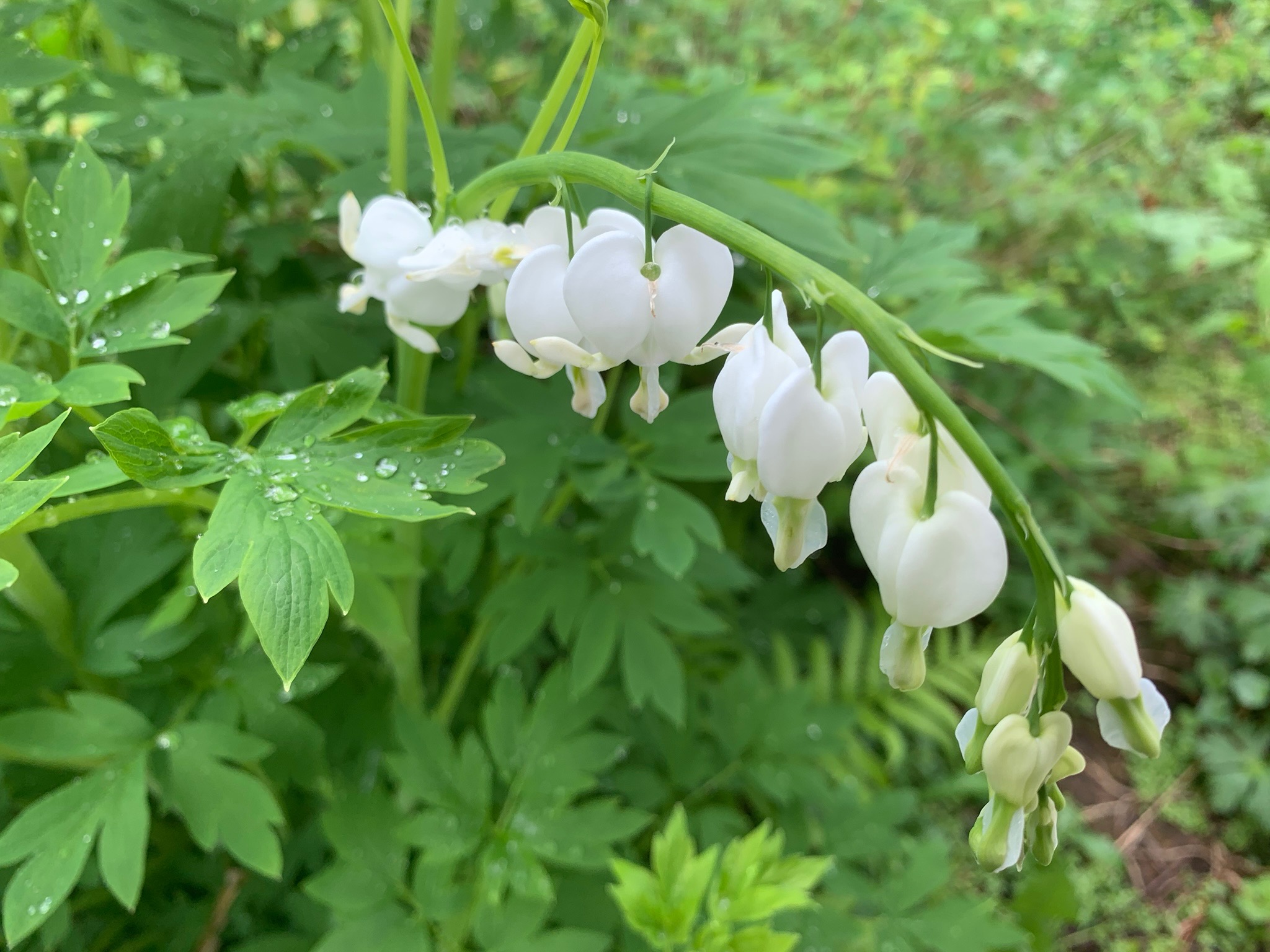 This might be Vasey’s Trillium. Not native here in WI, but gorgeous nonetheless. 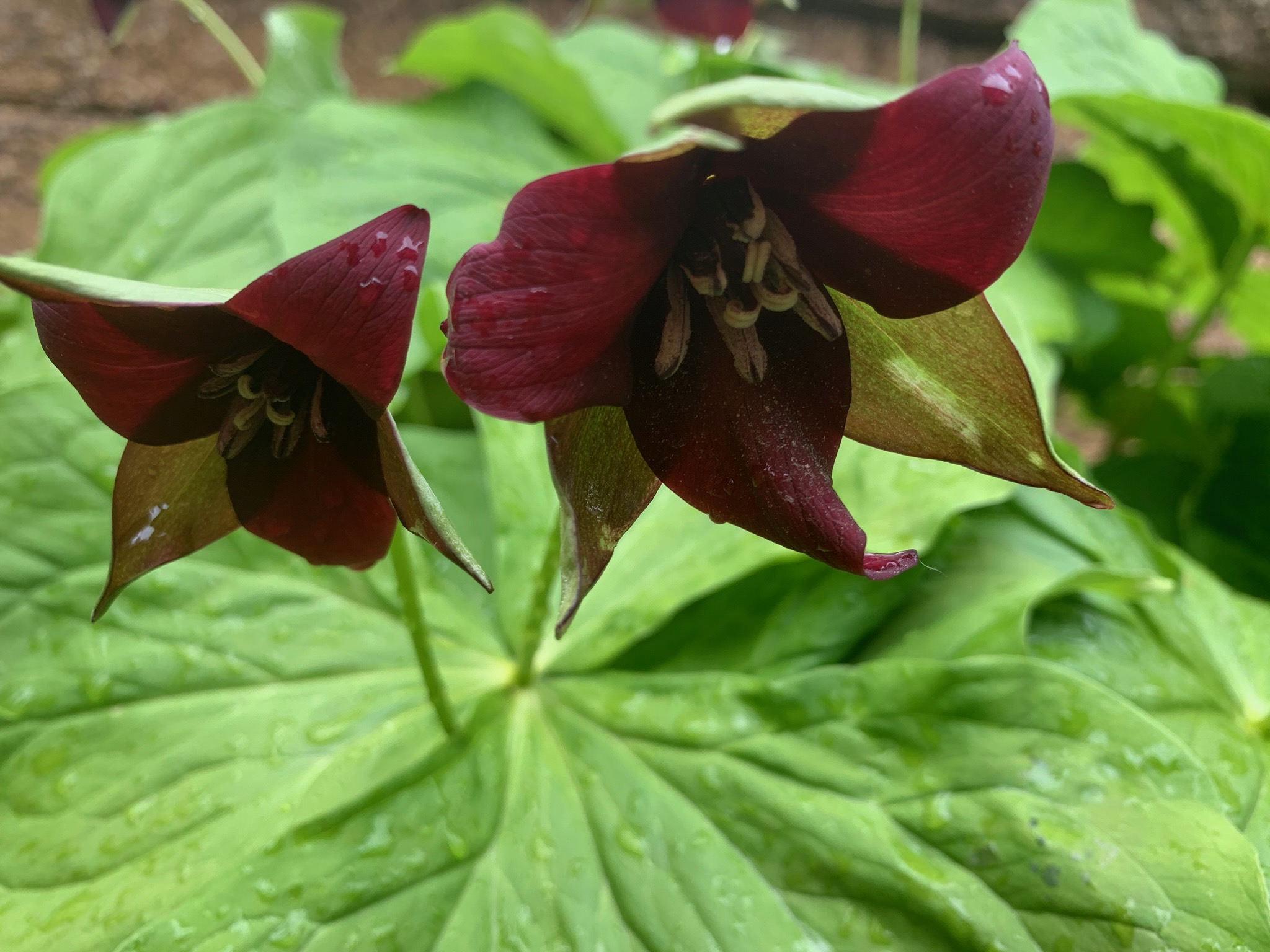 Best of all, here’s one of the native Jack in the Pulpits I transplanted from an at-risk area in our yard that made it through the winter! But actually, the one below is actually a Jill. (I wonder how many politicians people know that many plants and animals (fish especially) start out as small males and become females once they are robust, large and hardy?) 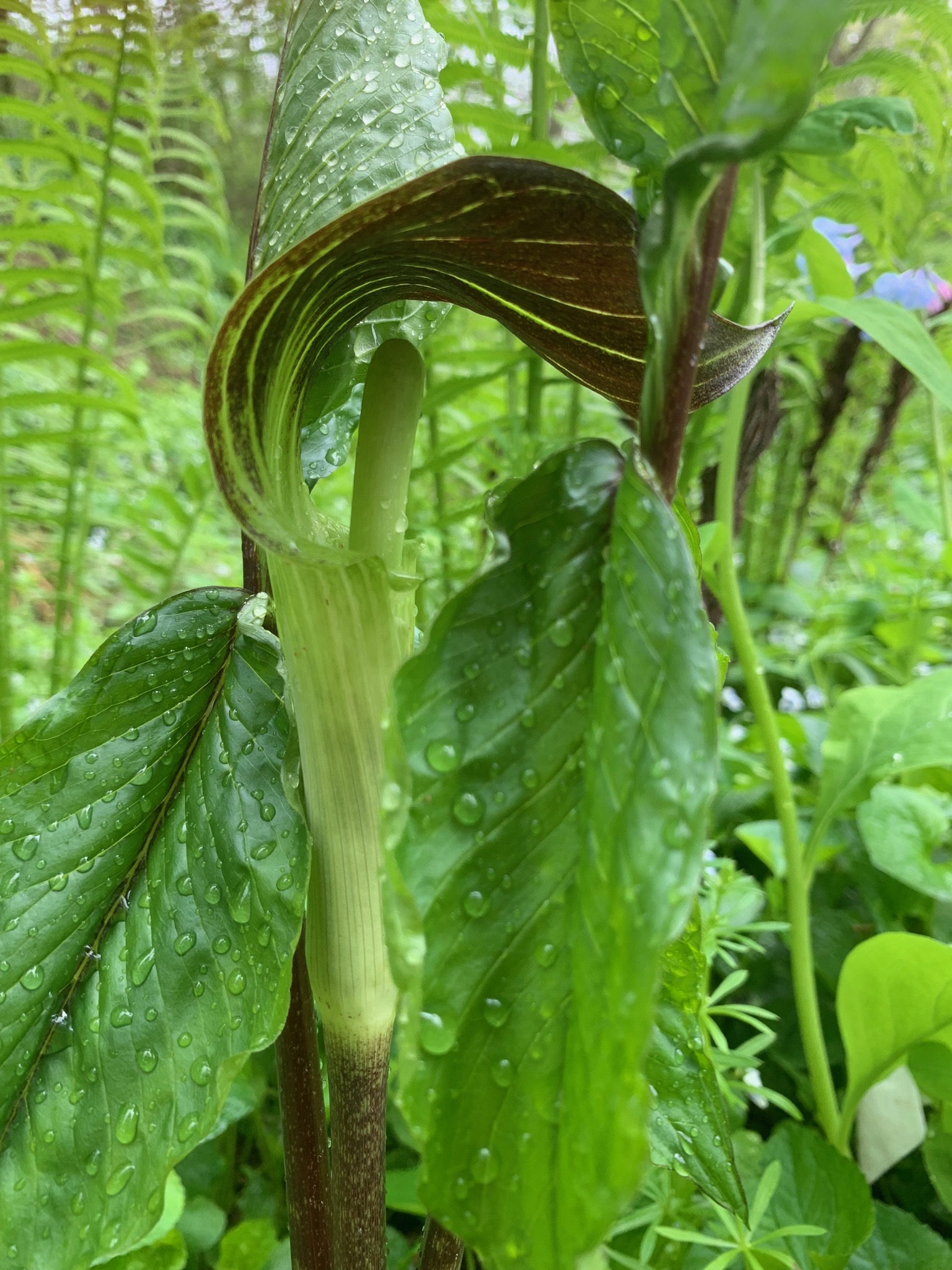 And of course, lambs. This is probably our last year of raising lambs. (Eeps, that’s hard to write. Okay, just maybe . . .) 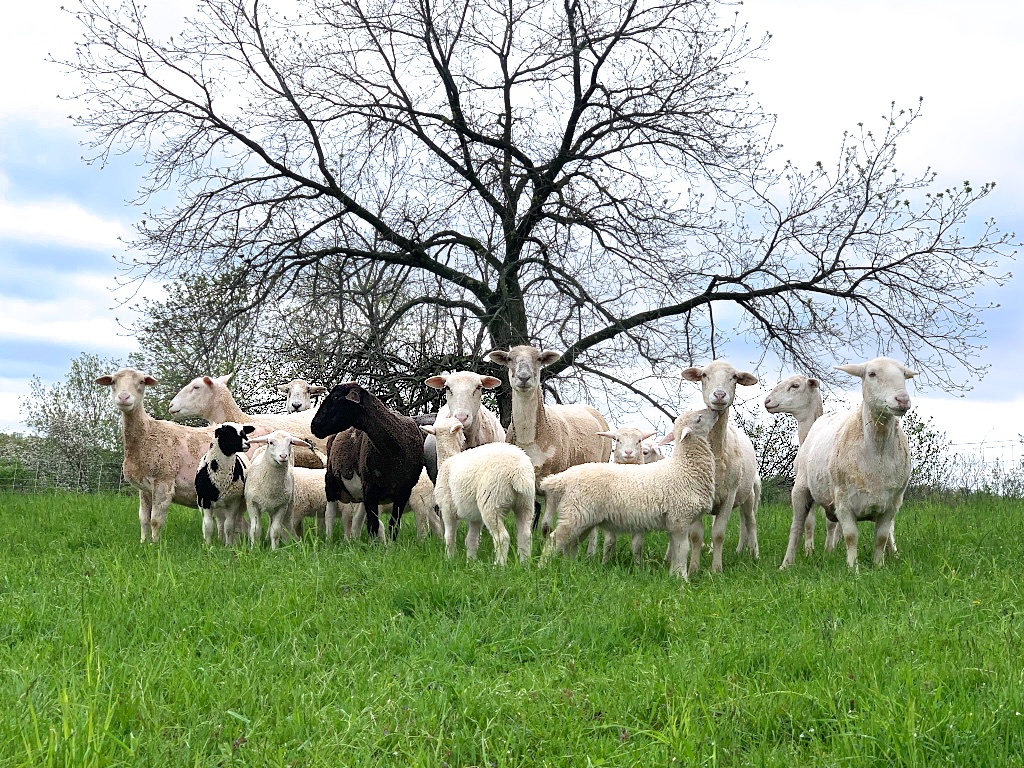 I hope spring (or fall!) is treating you kindly.