Welcome to an ongoing inquiry about the behavior of people and dogs.
Blog Home >> Animals >> Alex and Me; Animal Intelligence and “Thinking” in Animals

I read Alex and Me over the weekend, and highly recommend it. The book is about author Irene Pepperberg’s life, both as a scientist and as a parrot owner, with Alex, the African Grey Parrot. I’ve known of her research for years, and (full disclosure here), consider her a friend, so I can’t pretend that I’m completely objective. But if you are interested in animal intelligence, animal communication and/or what parrots have to teach us about the minds of non-human animals, this book is for you.

Irene, whose first real friend was a parakeet, left a promising career in chemistry to jump into the controversial field of “language” in non-human animals. No field better illustrates that, although the process of science is objective, scientists aren’t. That is often a good thing: scientists are often passionate about their work and that drive allows them to work through difficult problems, lousy pay (often), and working 80 hour weeks. It also means that individuals feel strongly about some issues, and the question of what goes in the mind of animals like chimpanzees, parrots and pet dogs still can elicit heated arguments among colleagues. Unbeknownst to her, Irene jumped into the field at the heat of controversy about whether non-human animals could use “language,” what “language” studies with primates actually told us about the minds of other animals, and other simple, trivial questions like “what does it mean to be human?” That controversy, and the fact that her training was as a chemist, not a psychologist or linguist, meant that Irene walked an uphill path to get funding and acknowledgment for her discoveries. This book describes her amazing and often difficult journey with Alex, both as a woman and as a scientist.

Irene started teaching Alex (which stood at first for Animal Language Experiment and was changed to Animal Learning Experiment because the word “language” was so controversial) to make sounds to label objects. As most of you know, Alex eventually became the Einstein of parrots, and was able not only to use labels (most of us would call them words!) to identify and request objects, colors, shapes, materials and number), he could also understand abstract concepts like “bigger” and “different” and most interestingly to me, “nothing. (Go teach your dog to fetch “nothing!” Wow, what a challenge! Could we?)

Irene has spoken and written extensively about her research with Alex, but Alex and Me is a personal look at the challenging journey she traveled, trying to get others to accept that a parrot with a brain the size of a walnut could do things only humans were supposed to be able to do. I won’t steal the book’s thunder by telling you all my favorite parts, but here’s one:

Someone sent Alex a toy parrot that was suspended over his cage. He walked up to it and said “You tickle,” his demand (Alex was very good at demands) for someone to tickle his neck. Of course, the stuffed toy did nothing. After a moment, Alex said “You turkey!” and walked off “in a huff.” Irene tells us that sometimes students had said “You turkey” to Alex when he was messing up, and he adopted the epithet for himself. (As anyone who has parrots knows, they are as skilled as we are at delivering epithets. No wonder sailors and parrots go together so well?)

I wish the book was longer, and went into her work with Alex in more depth, but that’s just me being greedy. It’s a fascinating and inspiring book, and if you are interested in both the science of animal communication and animal intelligence, and a compelling story about a woman’s relationship with a one of the world’s most famous animals, this book is for you.

On the home front, winter is here for good. Snow every couple of days, though luckily not too much of it at a time, at least not here in Southern Wisconsin. Here’s a photo looking out my kitchen window, up the hill behind the house to the “orchard pasture” where I can watch the sheep graze in summer. 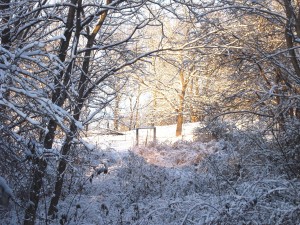 « Are Males and Females Different to Train Part 2
Do Dogs Know When We’re Sick? »