Welcome to an ongoing inquiry about the behavior of people and dogs.
Blog Home >> Animals and the People Who Love Them >> All About Dog Poop

Because it isn’t necessarily a fun topic, I thought I’d start off with my favorite story about dog poop. Imagine being at a sit-down lunch at two-day seminar I was giving on canine behavior and training. Picture a large room, with 150 people or so, sitting at round tables covered in white table cloths, the food delivered by hotel conference staff. You know the drill. We had finished a good lunch and looked with happy anticipation to what was promised to be a special dessert. Imagine our surprise when we each received a small plate with a perfect replica of dog poop on it. The cook thought it would be just too wonderful to feed us chocolate pudding in the shape of a brown, coiled snake of dog poop. It was impressively realistic. Apparently the chef was shocked that every plate was returned, uneaten. It is perhaps my favorite example of “what were they thinking?” By any chance, were you there? I’d love to hear from you if you were. I don’t remember where it was. Canada? Where ever it happened, it was memorable.

I can’t resist adding that, at the least, we could have gotten a plate of healthy poop, which should have looked like a Tootsie roll, instead of slightly-formed pudding. If by chance you’d like to learn more about healthy poop, check out this brilliant blog on what your cat’s poop is telling you. (Thanks to Julie Hecht for sending it!) The blog is about cats, but it is equally relevant to dogs. Just don’t decide to serve something that looks like it to company. But, on to more important issues: 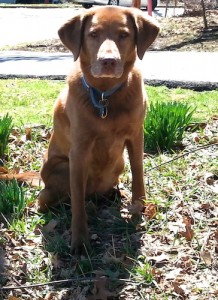 LOCATION LOCATION LOCATION: I was initially inspired to write about dog poop after receiving a question from a friend, whose dog MeMe (photo on the left)  took great pains to scramble up a mound of snow to defecate on top of it. That meant that friend Debbie had to scramble up herself, poop bag in hand, to clean it up. But why was MeMe expending so much energy climbing up a small mountain just to move her bowels? My guess is as good as yours, but I suspect it had to do with scent dispersal. The higher a scent is placed, the better the chance the air flow will disperse it. This is believed to be the reason that male dogs lift their legs, in order to deposit scent as high as possible; not so much to “appear bigger” but to allow the scent to be better dispersed. If you’d like to delve into this topic in more depth, check out a great blog by Koryos on scent marking in dogs, which ends with a good list of studies on scent marking in canids.

TEACHING DOGS TO GO IN ONE SPOT: Speaking of location, for some reason my dogs have been eliminating exclusively in my flower gardens. Not so great healthy when I’ll be spending lots of time digging in the dirt. The only exception to their flower garden preference is the lawn in front of our front door. I didn’t worry about the lawn over the winter, because usually it is covered in snow and the moisture acts to dilute the urine. Not this winter, however, because we have had so little snow, so I now have a front lawn that is more yellow grass than green. I’m not an obsessive lawn caretaker, but I’d still rather not have a polka dot lawn. Here’s what I’ll be doing, which is taking the same advice I have given hundreds of clients about how to teach your dog to pee and poop where you want:

Go outside with a hand full of treats and call your dog to your designated bathroom area. If your dog stares at you (as in “Give me the treat”), just look up and away and walk around the area slowly. Eventually your dog will give up and start to sniff. Continue strolling around slowly until Ginger or Rusty squats or lifts a leg, and give a treat immediately afterward. (Yes, you have to go outside with your dog and go yourself to the area you want your dog to use. Sorry… no standing by the backdoor in your bathrobe.) Continue treating your dog in the preferred area and eventually almost all dogs, by force of habit, will use that area, at least if you go outside with them. (This is why we have slip on boots by the door, and very warm, comfy bathrobes…)

A few caveats however: Most dogs have a preferred type of bathroom. Willie used to prefer bushy or grassy areas, although now that he is older he is more likely to poop in the middle of a trail. (I’ve noticed this pattern with several other dogs, that as they age they are less likely to eliminate away from the traffic pattern. Have you had the same experience?) Other dogs like the wide open spaces–so be thoughtful about what your dog is telling you regarding his or her choice for a bathroom. Also, be aware that dogs identify bathrooms by smell. We identify them by sight… we look for the sign that says “Restroom,” look for the stall, the round white thing, etc.) Dog are looking for the smell of urine or feces, so if you are trying to train your dog to use a new area, you might want to import some grass or soil (or feces) into that area. I’ve suggested that to many a client, and found that it has been helpful in transitioning a dog from the rose garden by the house to the brush at the far side of the garden.

Here, by the way, is a good post from the ASPCA about helping shelter dogs learn or continue good elimination habits while in shelters. Given how many dogs are returned because of house training issues, this is important stuff.

SPRING CLEANING and POSITIVE REINFORCEMENT: Poop had been on my mind in another way when I got Debbie’s query, because it is spring here in the northern climes. Everyone who lives in snow country knows what that means. Dog poop. Lots of it. Everywhere. No matter how much we clean up after our dogs, the reality of life in winter dictates that warm poop melts into snow, and disappears from view in an instant. That means that “spring cleaning” for dog lovers involves a very big bucket and some serious work with a poop scooper. Not a fun job, but someone’s got to do it, right? 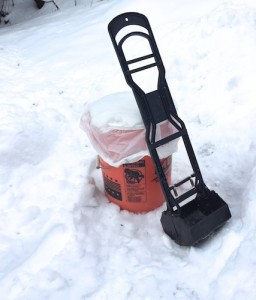 That reminds me of the importance of using positive reinforcement when dealing with the “gifts” left by dogs in public places. Understandably, people can get upset, even other dog owners, about feces left behind by owners who don’t pick up after their dogs. I well remember a time year ago that a pack of outraged dog owners started a brouhaha about how much feces needed cleaning up in spring in a public dog park. A spring clean up was organized, but the attitude was one of “how could other people be so irresponsible to not clean up after their dogs?” Well, first, as I mentioned, poop is warm and snow is cold, and it takes about a microsecond for the product of your dog’s elimination to disappear from sight. Second, the fact is that *^#! happens and sometimes owners are distracted and don’t notice that their dog has pooped, and others, well, don’t care.

However, rather than expend negative energy on “Ain’t it awful!” (my least favorite conversation abut just about anything), I organized a competition to make poop a high-value resource. Whoever brought in the heaviest bucket during the spring dog park clean up got a prize. A good one. All of a sudden people were racing around saying “Oh look! There’s one!” as if they had found an Easter egg. The next year I told Ian Dunbar about it at an APDT conference, where I was hearing the same “Oh, people are SO AWFUL” energy, and he announced a similar competition. It worked like a charm. Keep that in mind if you live in an area where there have been complaints about dog feces in public areas. Funny how positive reinforcement works on people as well as it does on dogs.

Enough about poop, although I have to admit I could go on and on. For example, I was going to title this post “Poop Poop Pe Doo,” but discovered that 1) many others have used that same phrase when writing about dogs and poo, and 2) some of these posts lead to places that, well, we’d all rather not go. But I did find a great Wiki site on Betty Boop, who coined the phrase. You just never know where curiosity is going to take you, do you?

MEANWHILE, back on the farm: No poop pick up today, we got 4 or 5 inches of snow last night. It will melt soon and that will mean more mud, but I’m glad to see it. It’s been a dry winter and spring so far, and we need the moisture. Here’s the snow decorating the cedar tree beside the house. 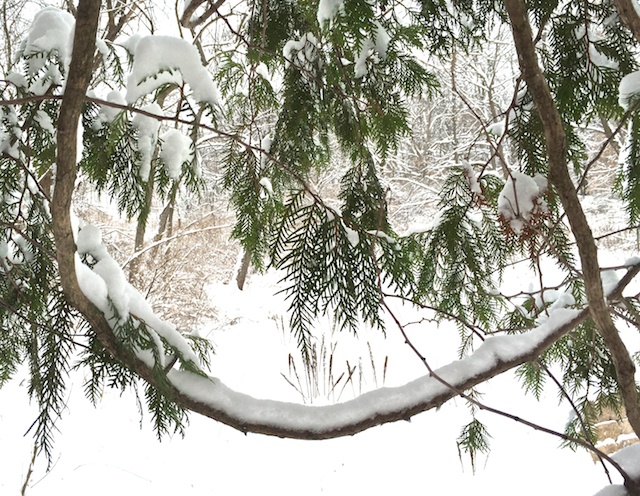 Tootsie did her Pet Pals shift this weekend at the American Family Children’s Hospital. I wish I could include a photo of the little girl who had Tootsie in her lap, with her head bowed down so that her body was curled around Tootsie. When the shift was over and it was time to leave I could barely get her to let go. It’s bitter sweet indeed to see how needy these children are, and how much having a dog to pet can mean to them. We’re not allowed to take photos in the hospital, but here is Tootsie getting her obligatory bath before her visit. I trained her to stand in the sink with her paws on the divider between the sinks, which she’ll do now without any assist from me so that I can have both hands for bathing her. You can see she’s just gotten a treat. Whee, baths are sort of fun, aren’t they! 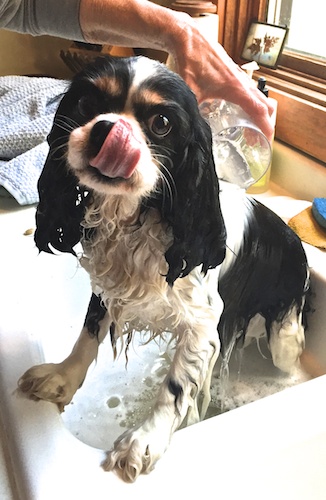 « Fish Falling From the Sky
Music to a Cat’s Ears »