Welcome to an ongoing inquiry about the behavior of people and dogs.
Blog Home >> Animals and the People Who Love Them >> All Exercise is Equal, but is Some More Equal Than Others?

So many great points being raised in the comments to my last post! One thing I want to be sure I am clear about: I am NOT suggesting that we should advise people to cut out neighborhood walks or giving their dog enough exercise to ‘wake’ them up. I hope it didn’t sound like that was implied in my comments. Rather, I think we need to make the general public aware that the exercise they do give their pets is often not enough to satisfy the dog’s exercise needs, and help the owners figure out what type and level of exercise the dog needs, as well as what they are able to provide. As I mentioned in the first post, my favorite solution for the owner who can’t manage more than a thirty minute walk is to add in lots of mental exercise for the dog through trick training.

The comments to the last post about increasing fitness, and therefore how much exercise it takes to ‘tire’ a dog out, are extremely interesting. It makes great sense that as any individual’s fitness increases it would take longer and longer durations to tire them — within boundaries however, as noted in the comments. That said, I very much agree that dogs need an “off” switch. Part of what I would call a “good life” is the ability to regulate one’s own arousal levels, and I’ve seen too many dogs at my office who were simply incapable of relaxing. The causes, of course, are many, from diet, to lack of exercise, to the type of exercise (constant stimulation while being constrained for example), to medical conditions, to being surrounded by families flying around like crazed frisbees in a convention of flying discs. Add on: Never being asked or told to just settle down. That’s actually one of my cues, and I don’t know how I would survive without out. It means: Stop dropping the ball in my lap or pacing around the living room like an expectant father from a 1950’s sitcom, go lie down anywhere you want, and chill out. Thank You.

This issue also raises breed differences, also highly relevant here, as some of you have noted in your comments. Surely there is not one category of “high energy” dogs, but subcategories of dogs who were, for example, bred to work hard sporadically and then rest, versus dogs who were bred to go all day long (For the later category I would include Huskies of sledding lines. Do the Husky owners agree? And can you spell Wirehaired Pointer?). For the former I’d say Dogo Argentino & Irish Wolfhounds, for example, who seem to behave like predatory cats: huge bursts of energy followed by long periods of slumber.  I’d actually put many of the herding dogs in between. The BCs I’ve had all had lovely “off switches” and I think it was easier to teach them to relax than some other breeds.

There are so many other factors, including the type of exercise: mental versus physical exercise for example. Herding requires a tremendous number of difficult, nuanced decisions, and I wonder if that isn’t more tiring than just plain running full out? More tiring also than seeking prey? What do hunting dog owners think… any sense to that speculation on my part?

Most relevant to most American pet dogs is whether the exercise is on or off leash. Surely there must be a certain amount of stimulation and perhaps, frustration, in being restricted by a leash while encountering a vast range of stimuli. If someone asked me what dogs most want, beyond safety, shelter and social companionship, I say “Freedom” to make some of their own decisions. To go right instead of left. To stop and sniff as long as they want. To run with they feel like it and walk when they don’t

Of course, some dogs absolutely can not be allowed off leash and simply do not have that alternative. (I would never have taken my Gr Pyr Tulip on a long walk in open woods off leash for example.) Those dogs need other alternatives, different types of exercise in addition to leash walks and lots of mental exercise.  I am reminded of clients I had who owned Dalmatians. In my office the dogs were OOC (my symbol for Out of Control) – and as I described to the owners, that meant the dogs were out of their OWN control, much less the owners. We trained them to indoor treadmills and they got low stimulation but highly repetitive exercise (can you say aerobics?) and calmed down profoundly after just a week or so.

It would be such a joy if everyone could take their dogs on 2 to 7 hours walks everyday, would that we all had that life (some of the people who commented to the last post manage that!). I think our challenge is to keep in mind that “exercise” is not a simple category measured only by duration, but also by the type of exercise. Some exercise relaxes and some stimulates; some is too much for one dog and just right for another. We would do well when advising the general public to keep these things in mind. And one last, but I think important point: Trying to give our dogs a great life is a wonderful thing, but sometimes I think it’s also important to remember that we do not owe them a life profoundly better than our own. Are you eating as well as your dog? Are you feeling guilty because your dog DOESN’T get a 3 hour off-leash walk every day. If so, remind yourself what the lives of most dogs, and most people for that matter, are like. Then go tell your dog how profoundly lucky she is and relax knowing that you are probably doing the best you can.

MEANWHILE, back on the farm: Hot humid day, Willie and I are in the study, the coolest room at the farm. We just got back from Phys Therapy at UW, his first since his surgery. The new is mostly good: both surgeon and PTist think he’s doing very well in terms of how he is using his leg. His range of motion is almost normal (that’s what we’ve been working on every day, so that feels really good) and he’s putting full weight, at least briefly, on his left leg. He has had a few regressions: He now has a seroma under the incision (fluid-filled swelling, relatively common from shoulder surgeries) and there is still quite a bit of swelling around the surgical site. Darn! The incision looked just perfect until yesterday! Also, he’s had 3 incidents of what appears to be extreme and acute pain –something catching on something? Each one is less intense however, so really all we can do about that is hope they disappear as time goes on. The seroma is small enough that draining is not advised, but I’ll use heat and massage to try to counter act it. It showed up the morning after I let him greet some girls helping me in the garden, and even though he had on his hobbles he was excited and did way too much flapping and flailing around. No more visitors for Mr. Willie, poor guy. But his PT is going well, he doesn’t bark at all anymore if I’m outside while he’s in the crate and he seems to be adapting to his new routine. I suspect that he is a bit depressed, but since it makes him quieter I just look at the calendar, remind myself that mild depression is not fatal in a dog, and repeat One Day At A Time.

Here’s a new peony I just planted. Such a classic in the mid-west now. Not native, but still so beautiful! 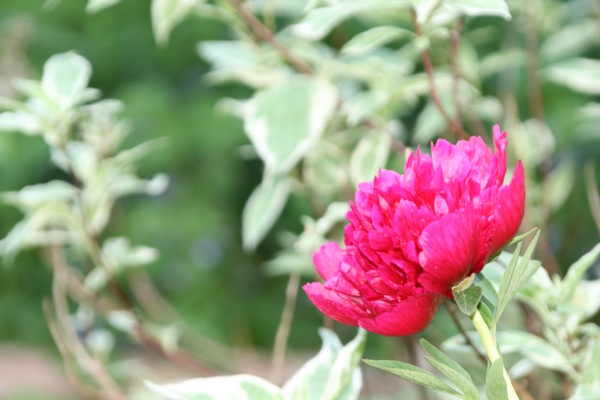 « Just Enough Exercise to Wake Up Our Dogs?
Can Animals “Blame” Others? »