Welcome to an ongoing inquiry about the behavior of people and dogs.
Blog Home >> Lassie >> Alternative Medicine for Dogs

A comment from a reader inspired this post, about “alternative” medicine for dogs (see the comments for April 15th). In her comment, she expressed great disappointment that I bought into “…wackadoo absolutely scientifically unsupported claptrap.” This is not the first time I’ve been told that my interest in Chinese medicine, acupuncture, chiropracty and natural foods is a kind of a betrayal to my scientific background. And yet, it is exactly my background in science and research that causes me to make the choices that I do for my own health and for that of my dogs.

One of the things that one learns when getting a Ph.D. is that “science” is a fluid creature, moving this way and that, depending on the state of our knowledge (and the culture) at the time. You also learn that there is a profound amount that we don’t know, that many of the things that we think we do know turn out to be wrong a few years down the road. In addition, it becomes stunningly clear that, at any given time, science may acknowledge a particular observation or result, but not understand the mechanism to explain it. It was my experience in graduate school that helped me see the difference between result and  mechanism: not understanding why or how something works is not a good reason to argue that it doesn’t work. That said, I have tremendous respect for Western medicine, and there is absolutely nowhere in the world I would rather be if I was in a serious car accident, or had a dog who needed surgery. I have a James Herriot kind of regular veterinarian, perhaps one of the kindest and most wonderful vets you can imagine. He has never once rolled his eyes when I talked about the “alternative” medicine I was planning to add to my dog’s health care, and has joined with me in changing our practices as we learn more through the years. (He feeds his dog a lot of table scraps now, after researching and thinking about my contention that it couldn’t be good for otherwise healthy dogs to eat nothing but the same processed food, day after day.)

I also am of the firm belief that there are many products out on the market that are of no use in human or canine health, and that we all need to be very careful about not jumping on this or that band wagon of the supplement/medicine/food-du-jour. (That is true of all fields, including western medicine, I would humbly suggest.)

That said, here’s the health care I use regularly: Besides my regular vet (John Dally of Spring Green Animal Hospital), my “sports medicine” vet is Dr. David Ettinger of Veterinary Specialty & Emergency Care in Madison. He and I are in conversation about Willie’s shoulder… final decisions about surgery awaiting more time to see if Willie will respond to Chinese medicine by summertime. I have spent many a day at the University of Wisconsin Vet Clinic, seeing specialists too numerous to name for various and sundry medical crisis. Once a month, Lassie and Willie go to a chiropractor board certified in animal chiropracty, Dr. Mark McCann through Middleton Veterinary Hospital. The difference it makes, especially with old Lassie, is obvious and observable as she walks out of the clinic. (Many years ago a chiropractor saved me after five months of abject misery due to a serious whip lash accident. I had been to three physicians, including a neurologist who said that if I didn’t have 3 cervical vertebrae fused I would lose the use of my right arm. I wanted to avoid surgery and a permanent disability, and was referred by a friend to a chiropractor. After one treatment I was 85% improved and got the first relief I had had in months. I have a lot of back trouble, and can’t imagine living without a good chiropractor. Of course, a bad one can cause all kinds of trouble, and I’ve been to a few, but that’s no different than any other doctor. As a pharmacist told me once “If it has the power to do good, it probably has the power to do harm.”)

My dogs also see Dr. Jody Bearman through AnShen Vet once month. Dr. Bearman is a DVM who has spent years studying Chinese medicine. Chinese medicine is indeed based on a completely different paradigm than western medicine, and I won’t pretend that when I was first listening to chinese doctors talk about it my eyes weren’t spinning around like a cartoon character’s. I’m actually not sure that I buy the ‘energy flow’ explanations for why certain types of acupuncture work, neither do I have a certainty that certain forms of protein are better for some dogs than others. However, there is a growing body of solid (‘western’) science showing that acupuncture is indeed effective for relieving certain conditions, just as there is overwhelming evidence that chiropractic medicine is significantly more effective than “traditional medicine” at curing certain problems (back pain for one.)

I read one study not too long ago (sorry, don’t remember where… Sci Am Mind?) that compared 1) acupuncture needles placed in areas as prescribed by chinese medicine practioners, 2) acupuncture needles placed randomly around the body, and 3) sham acupuncture with no needles actually penetrating the skin. In this study, needles placed anywhere into the body were successful at alleviating pain, while the sham treatment was not. The western medicine explanation is that the needles stimulated the body to produce hormones that act to inhibit the sensation of pain, not that Chi or energy flow was being released, as explained by chinese medicine. (That relates to what I said earlier that often we don’t understand the mechanism until many years after we discover the action of a substance or a procedure.) I am not convinced that anyone knows the exact mechanism of why acupuncture is so successful, but there is no question in my mind that it is a legitimate medical therapy.

The fact is, what used to be considered “alternative” medicine is now called “complementary” medicine by most progressive physicians, hospitals and research institutions. The UW Vet clinic here does acupuncture. Here at UW and at Harvard there are centers for the study of “Integrative Medicine,” as it is becoming increasingly clear that health is more than a collection of happy cells and nerve fibers. I took “Mindfulness Meditation” through the UW Hospitals and Clinics, one of the many places that is doing research showing that meditation increases immune function, decreases pain and increases focus and overall reports of “positive affect” (the rest of us just call that being ‘happy!’).

Right now, Lassie and Will receive acupuncture, chinese herbal medicine and I take Dr. Bearman’s advice about what protein to use for the both. I truly don’t know if feeding them both duck, fish, beef and eggs, and avoiding chicken and lamb, really does help them, but because they are getting a good, varied diet, I can’t imagine it hurting. I can tell you that Lassie is not just 15.5 years old, she is spunky and playful and doing astounding well, even after being diagnosed almost two years ago with “Stage 2 Kidney Failure.”  Do I know that the chinese medicine helps?  No, not directly, but I tried to cut back on some of her meds awhile ago, giving her fewer of her “Body Sore” pills that are supposed to alleviate arthritis. A few days later her forelegs began to take on the salmon-colored glow of fur that’s been licked a lot….so she’s back on her usual dose. I should add that she also takes a 1/2 tab of Tramadol that also makes a big difference in her pain level, as well as a Omega-3 tablet and a homeopathic medicine I’ll talk about in another post.

One last thing about these two practices, chiropracty and chinese medicine. What is important to me is that I see real experts in those fields, not people who have degrees in other practices and have learned to dabble in another one. My dog’s chiropractor is not just a degreed doctor of chiropractic medicine, he is board certified to work on my dogs. My chinese medicine vet is a DVM veterinarian, and has extensive training in both perspectives. The biggest harm that I have seen is from people who don’t take the complimentary medicine seriously, take a weekend clinic on it, and then add it to their practice without enough training or experiene. Again, if something has the power to do good, it probably has the power to do harm.

One more comment, about a response to my post that I add Probiotics to Willie’s meals. Just to be clear for those of you who aren’t familiar with them, Probiotics have long been accepted by physicians, nutritionists, etc etc. as an important addition to the diet of individuals who are “digestively challenged,” as Willie was when he was a young pup. (If giving Willie sheep manure that I had to pre-digest myself would’ve stopped his projectile diarrhea I would have done it. There is just so much cleaning of poop off of walls, floors, crates, carpets and one’s own jeans if you happened to be standing at the wrong place at the wrong time that a girl can take. Seriously.) Several nutritionists argue that everyone should be taking prio-biotics (which replace the natural, healthy bacteria in our guts that facilitate the absorption of nutrients), because so many of our foods are nutrition poor. In Willie’s case, the addition of Pro-biotics was essential for the first year of his life. I’ve found I can skip them for a night or two now that he’s older, but if I add anything out of his usual menu he needs the Pro-biotics to keep his stool healthy.

If I haven’t lost you already in the land of “claptrap,” it gets worse. If you really want to hear how Dr. McConnell has gone “wackadoo” (I am becoming quite fond of that word), follow along for another post soon to come, about my reliance on Arnica, Traumeel and Zeel, homeopathic medicines which, to my mind, shouldn’t work at all, based on their proponents description of how they work. Except they do. Go figure.

Meanwhile, back at the farm. The main flock is now out on grass, sparse though it may be, and they are loving it. We had a few interesting moments when Barbie, my most protectively aggressive ewe, chased Willie a good fifty feet across the front yard, but things are settling down. Here’s they are on their first day up the hill with their young lambs: 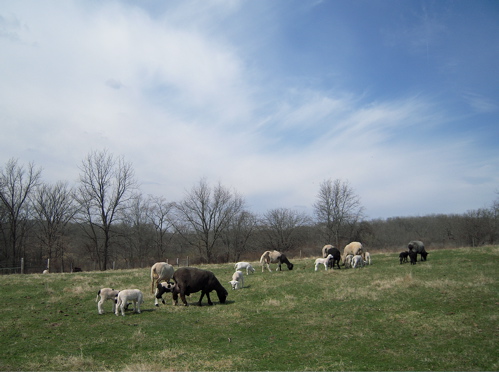 Here they are waiting for their grain in the evening by the barn. They love to sleep outside, but close to the barn. I am still nervous about the coyotes, but so far, so good. 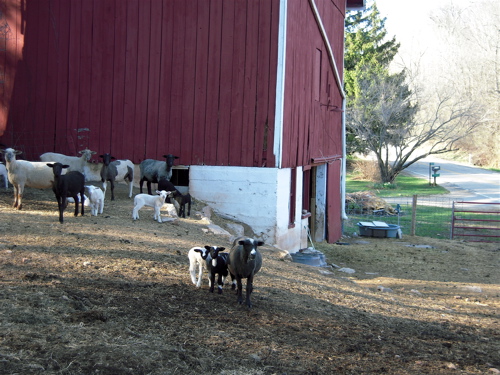 And here’s another spring ephemeral, Bloodroot, as it is closing up for the night. It’s called Bloodroot because the sap is a reddish orange. It’s a gorgeous early flower, and it is spreading up the hill behind the house. Makes me so happy… 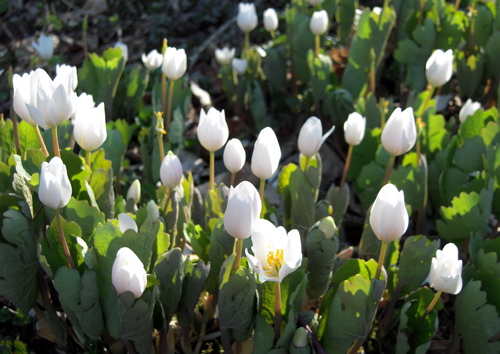