Welcome to an ongoing inquiry about the behavior of people and dogs.
Blog Home >> Animals >> Angst for R. Alexandra

Please don’t run Rachel Alexandra in the Belmont. If you don’t follow horse racing, that request if meaningless. If you do, you know that the Belmont is the third race in the Triple Crown, the be-all and-end of American Thoroughbred horse racing. You also know that “fillies” rarely win horse races (could we call her a mare, please?) and that Rachel’s win yesterday in the 2nd leg of the Triple Crown was historic.

What you may or may not know is the depth of controversies that currently runs rampant (pun intended) in the world of horse racing about the welfare of the horses involved. My knowledge of the arguments for and against horse racing have recently been enriched by the term papers written in the class I teach at UW- Madison.  Each student has to write two papers about the biological and philosophical aspects of a current controversy regarding our relationships with animals. (Which would you have chosen?  Pick from: 1)Horse Racing, 2) De-Listing or Not De-Listing  Wolves from the Endangered Species Act, 3) Gestation and Farrowing Crates for Hogs, 4) Wind Turbines (“green energy” which some say kills large numbers of bats and hawks) and 5) Purpose-Bred Injurious Mutations in Rodents in Bio-medical research)???

I loved horse racing too. While other little girls had dolls, I painstakingly cut out tiny pieces of leather to create bridles and saddles for the plastic horses that sat on my dresser. I drew horses in my sleep, and sobbed for hours when Tim Tam broke a sesamoid bone and lost the Triple Crown. And so I couldn’t resist watching the Preakness. Sexist colors flying, I cheered so passionately for Rachel to win the race that Jim and Willie ran into the house, frowns of worry on their faces, to see what was wrong.

I cheered for Rachel knowing that thousands of horses who don’t make the grade are sent to unregulated slaughter houses in Mexico. That the use of steroids and bizarre cocktails of drugs have been used for decades to mask injuries or pump up muscle where muscle shouldn’t be. (The big tracks have finally banned steroid the use of steroids.) Perhaps worst of all, the driving force behind racing is no longer breeding and training horses that win a lot of money. Rather, the money is in the stud fees (at $25,000 to $200,000 a pop, a mature stallion can ‘cover’ at least a mare a day .. you do the math). So if you want to make a lot of money in horse racing, you breed horses who have muscles like weight-lifters and legs as light and thin as a glass icicle. That makes them really, really fast, and some argue, really, really fragile. Decades ago owners wanted sound horses who could win a lot of races, who brought in a lot of money from the purses. Now the focus is on winning a couple of big races, pulling their valuable merchandise off the track, letting boys be boys and collecting their money.

Is the focus on too much muscle the reason that the brilliant mare, Eight Belles, died last year, in front of god and gazillion people, when her forelegs exploded after the Kentucky Derby?  Is that why more and more “fillies” are leaving the gate as large and muscled up as the boys? No one knows, but there are plenty of people in the industry who are just as concerned as animal rights activists are about the welfare of race horses. (My student’s papers advocated banning horse racing completely by a two to one margin. Industry take note.)

So, please don’t run Rachel in three weeks. She ran a huge race three weeks ago in the Kentucky Oaks (she won by 20 lengths). She ran a huge race yesterday on a sloppy, difficult track (her own jockey said she was struggling). Three big races only three weeks apart each is too much for any horse. People are calling Rachel Alexandra one of the greatest horses of the year. Of the decade. I don’t care how she is rated years from now. I just couldn’t stand to watch her legs explode.

If she runs, I don’t think I’ll watch.

Meanwhile, back at the farm: In some ways, spring holds the same mix of emotions for me as horse racing. I love it and dread it. It’s gorgeous here dear readers, breathtakingly gorgeous. The lilac bush is in full bloom, the emerald green grass looks lit from within and the warblers flit like crazed jewels in the tiny, new leaves unfurling above our heads. And the high pasture needs fertiziling by hand, the flower beds are rife with weeds, the brush pile needs burning, the flock needs worming, the water tanks need cleaning out…. etc.  I won’t bore you. Spring is an astoundingly busy time on a farm, even a little one like mine. I’m behind at work, I’m behind on campus and I’m behind in just about anything else you can imagine.

Oh. I guess I’d better get to work then, hey?  I’ll tell you next time about Willie and Redford and the January lamb. We had a bit of an adventure earlier. Willie is okay, the lamb is okay, the fence is okay, but Redford has a bad bruise on his head and a cut on his shoulder. I’m hoping it’s minor, but he’s lying down now and he’s not chewing his cud. Cross your paws. More soon.

Here’s Redford on the left under the tree, relaxing after a hard morning eating grass… 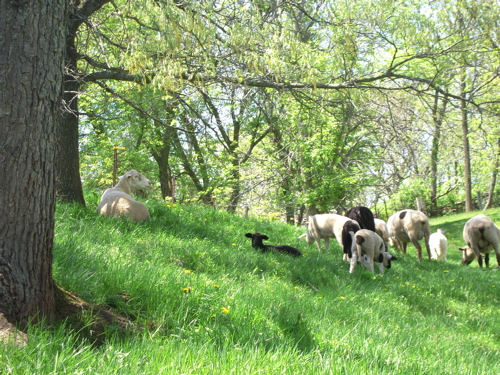