Welcome to an ongoing inquiry about the behavior of people and dogs.
Blog Home >> Animals and the People Who Love Them >> Animal Assisted Therapy; Come say Hi in Naples, Fla!

I’ve loved our discussion about the “Right Stuff,” and how every dog has its own talents. I think that is never more true than when asking a dog to do Animal Assisted Therapy. AAT is on my mind now, because I’ve just finished working on a speech I’ll be doing in Naples, Florida to raise funds for a worthwhile cause, The Brody Project. I’ll be dining with donors this Wednesday, Jan 6, and speaking on Thursday, Jan 7th on “The Power of Pets.” The Brody Project does AAT at Moorings Park Continuing Care Retirement Community and if you are in the area, I’d love it if you came up and said hi. I also just finished a chapter for a new book by Audrey Fine, the silver-back of AAT, on what caretakers of assistance dogs need to know.

And here’s the bottom line: They need to know if their dog is truly and inherently suited for assistance work. I had a client come to me last year to help turn his neophobic dog into a therapy dog, when the dog was silently yelling to me that he couldn’t, he just couldn’t . . . “oh please please don’t make me go to that scary, smelly place again. . .”

There are many traits that make a good therapy dog, but here are the two that stand out to me:

1) Inherently social–the kind of dog that seems to think it’s a miracle that there is an endless supply of people in the world. I’ve mentioned before that when Willie sees a new person (as long as it’s not a loud, tall, unfamiliar male who runs up and looms over him), I swear he is thinking: “LOOK! There’s ANOTHER one! Oh boy, another person! Where do they all come from?” I don’t mean that the dog needs to be beside himself with excitement like Willie is (see #2 below), but you just can’t train dogs to deeply care about people they’ve never met if they don’t feel that way naturally.

2) Non-reactive and relatively calm–Thus, cross Willie off the list. Will would not be a good candidate now, because he is so enthusiastic about greeting new people. Oh, he keeps his butt on the ground (with great effort), but when people enter the house he is literally beside himself with joy, and can barely contain himself. I imagine, if he were in a hospital setting, that oxygen and IV lines would end up flying around the room, potentially joined by a previously immobile patient after being mauled by four overly enthusiastic paws and one very pink tongue.

However, Will may be the perfect dog when he is older. That’s something that Audrey and I talked about a lot for his book, that so many dogs are tested (and failed) at two years of age or so, when most dogs do best after they have aged and matured a bit. Many dogs need time and maturity to do grown up work, which doesn’t seem surprising when you think of it. How grown up are people anyway when we are twenty years old? Very grown up in some cases, but in others, not so much. No matter who you were when you were twenty, did you have the same level of balance and maturity at twenty that you did at forty? Fifty? Sixty? (Okay, lots of you are dropping out, but at 61, I felt compelled to continue listing the decades!)

I will never forget sitting in the International Dog Trials in Scotland many years ago, and noticing that the dogs seemed surprisingly old for such athletic work. I later figured out that the average age of the dogs in the trial (the olympics of herding competitions) was 7.5 years of age. Some dogs ran at age nine. Dressage horses don’t compete seriously until they are at least five or six years of age (someone correct me on this, or add to it… I’m estimating), and many of them aren’t considered even close to fully trained until they are over ten.

I’m curious about your experiences. Several of you commented on my last post about your dogs becoming therapy dogs after being pulled from another activity. How old were they when you started? And what do YOU think is required in a good therapy dog?

FYI, one of my dreams for when I retire is to do animal assisted therapy or animal assisted activities, whether it be working with a medical team in a hospital-like setting, or getting involved in the Reading to a Dog project. But, it’ll have to wait. Until then, I’ll look forward to your comments and write from Florida.

Meanwhile, back on the farm, it’s cold cold cold. Minus 8 F yesterday morning. That’s nothing for Fairbanks, I know, but for us Wisconsinites it’s cold. Highs in the low teens all weekend, so Lassie goes out to pee or poop, and will only do one at a time. She eliminates whatever needs to leave her body first, and then trots purposefully into the garage, and goes back into the house. Her belly is shaved and I worry her feet will frost bite, so I don’t hesitate to put her inside.

But Willie still loves to be out, and so we snow shoe up the hill and play fetch in the deep snow. It is an inexpressible joy to be able to play frisbee or “fetch the thrown stick” with Willie now. We can because the deep snow insulates the impact when he lands or short stops, so it doesn’t seem to bother his shoulder as it does otherwise. What heaven for us both. Here’s a photo Jim took a few days ago when we were playing in the orchard pasture up the hill behind the house. 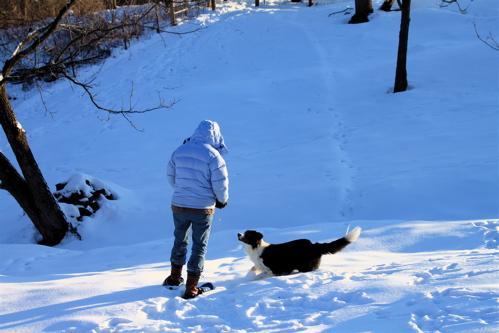 « The Right Stuff: Every Dog Has Her Place
From Sunny (not) Florida »