Welcome to an ongoing inquiry about the behavior of people and dogs.
Blog Home >> Animals and the People Who Love Them >> Animal Dreaming…? 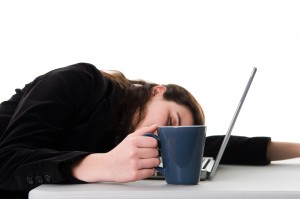 Do humans and animals have similar dreams? This is a question asked by a young participant in a science exhibit at the Discovery Center, University of Wisconsin-Madison. I heard about the question from Jeff Bauer of Blue Sky Science, who asked if I would be willing to be taped attempting to answer the question. We’ve already taped “Can humans have similar abilities as animals,” which was great fun. (I’ll let you know when it’s up online. I love supporting science education for young, curious minds.)

The question of animal dreaming is a great one, and it’s been asked by curious people for centuries. Even Aristotle wondered about it in 350 BCE, and concluded that “all viviparous quadrupeds” probably join our species in dreaming at night. But do they? Certainly most dog lovers think so. But what do we really know about the dreams of other animals? Answer: Not much, but researchers have made some impressive discoveries lately.

First off, we know that mammals have all the structural components involved in the production of human dreams, from an active hippocampus that fires up while we are sleeping, to an structure called the pons that literally paralyzes our muscles to keep us from moving too much while dreaming (and is the structure that dysfunctions when people “sleep walk”). Mammals like our dogs have clear REM sleep periods, which is when most of our dreams occur. Basically, the state of the art of neurobiology makes it clear that mammals can and do dream, and that dreams seem to be important in our lives.

However, the research that got the most attention lately is the work of Matthew Wilson and Kenway Louie, neuroscientists at MIT who study dreams. They were able to record the firing of single cells in the hippocampus of four rats, and watch their activity as the rats ran through a maze. Different cells fired at different sections of the maze. (These cells are sometimes called “place cells;” we have them too–cells that fire only when you are standing beside your kitchen counter, for example. Who knew?) Later, the rat researchers observed the same cells firing while the rats were asleep in REM, in the same order as when they ran the maze. It was as though the rats were running the maze in their sleep. 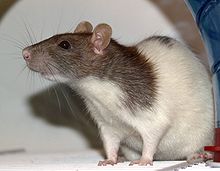 One of the most interesting findings of this research was that there was often a cessation of place cell firing at the corners of the maze, when the rats had to make up their minds which way to turn. But even in their dreams, other cells did fire, but this time the ones associated with other places in the maze. In other words, the results looked as though the rats were thinking about where they had been, or where they could bee–they were focused not on their immediate environment, but what they knew about other areas of the environment from their memory. You can get a much better picture of what this all looks like (and means) by watching this amazing video of Wilson and Louie’s research. The entire segment on sleep and dreaming from the World Science Festival is an hour and a half. I’ve only watched part of it, but will keep on doing so because it’s so interesting. 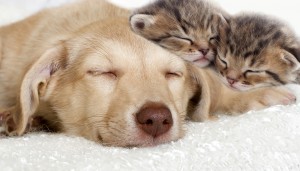 But what might our dogs (or cats) be dreaming about? How often have we said “she must be chasing rabbits” when our dog’s paws twitch in what looks for all the world like she is dreaming? Ah, we have a long way to go to answer that question. We do know that dreams during REM tend to have a emotional content, thus the dreams we have in which pencils sprout wings or we find ourselves falling over cliffs. This is because the more cognitive areas of our brain, like the prefrontal cortex, are turned off during dreaming. We also know that although our REM dreams often have a component of something that happened during the day (you had a visit from your friend Diane), the context of that fact is radically different (you dream that you and Diane are skiing in the Alps when your skis fall off…). According to researchers Stickgold, Hobson, Fosse & Foss, “We hypothesize that these features reflect an attempt, on the part of the brain, to identify and evaluate novel cortical associations in the light of emotions mediated by limbic structures activated during REM.” (Science Vol 294, 2001). Others describe this, in simpler terms, as memory processing and consolidation. 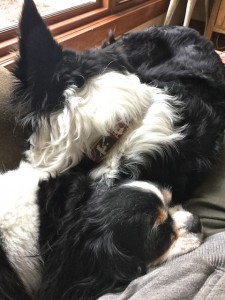 Thus, it is reasonable to speculate that our dogs are dreaming about something that might have happened during the day, but not necessarily in context. (Herding the rabbit they saw in the woods in the afternoon, but this time in a sheepdog trial in the snow under a purple sky?) Someday, maybe we’ll know more, but for now, we can savor watching our dogs enjoy sleeping. It’s hard to beat the contented face of a sleeping dog, right? (Although cats do a fine job themselves.)

Do dogs have nightmares? [I added this paragraph a day after posting the rest of the article because so many reader’s comments were about their dogs having nightmares.] It seems very likely. Our experiences, the biological continuum between all mammals, and the emotional content of REM dreams, suggest that they do. So many of us have seen and heard dogs growl and whine while dreaming. I’ve had clients whose dogs woke up in a panic, sometimes even running across the room and trying to hide. Science teaches us to be “parsimonious” in our explanations of what we observe, and surely it is simpler to explain what we observe, and what we’ve learned about neurobiology to assume that dogs do indeed have nightmares until evidence appears that tells us that they don’t. I wouldn’t bet on that happening, myself. But it is also probably true that most of a dog’s dreams aren’t nightmares, and are either pleasant, or just bizarre. (And here’s the fun question: What do dogs think of their dreams? That’s the cognitive part of the equation, and that’s where we differ most from the mind of a dog. I suspect the answer to that question is going to take us a long time to answer!)

This all suggests to me that it’s time for some more photographs of reader’s dogs, this time while they are sleeping in amusing positions. Send your photographs in (one per dog if you would) and I’ll post a blog sometime in April of the best ones (criteria – Trisha laughs out loud, possibly doing a spit take and showering her long-suffering computer monitor with the morning’s tea). Send your photo(s) to info@patriciamcconnell.com. I won’t be able to write you back to thank you, and it’ll be a few weeks before I can sort through them and create a post out of them, but I can’t wait to see them. Maggie is especially adept at sleeping in ridiculous postures, I’ll do what I can to get a good shot of it.

Meanwhile, down at the farm. Flowers! The first flowers blooming showed up this week, and oh, it makes me so happy. I do believe I’m about to gush again. Here are the first one I spotted, some sweet little crocus we planted last fall: 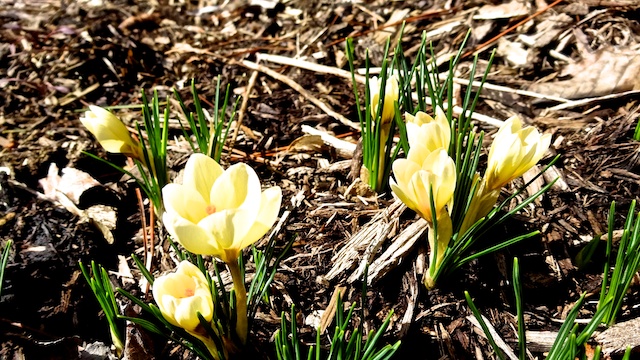 Here are some of the sheep getting their first taste of spring grass after being shorn. I kept them inside before and after shearing for a few days because it was windy and rainy, so this was their first day out of the barn. In the sun.  With honest to goodness real, green grass to eat. That’s Lady Godiva on the left, keeping an eye on Maggie, who is out of the picture. Not too hard to see that Lady Godiva is pregnant, is it? Her due date is April 6th, but that means about the same in sheep as it does in people. 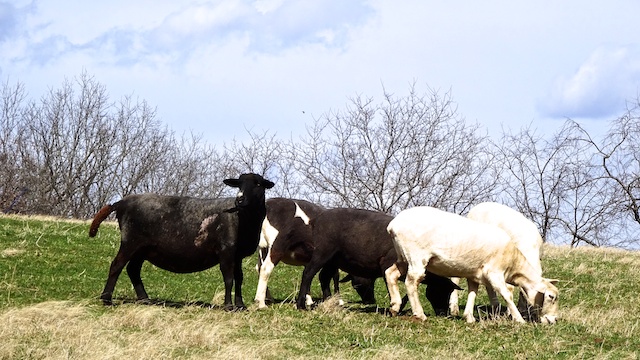 This weekend I made a chicken/sausage confit from local, organic chicken and pork. (I had to look up the definition–basically a confit is meat cooked very slowly in oil or fat). It was one of those 2 day projects, and I think I used every dish in the kitchen. But, ummm, looks pretty yummy, doesn’t it? 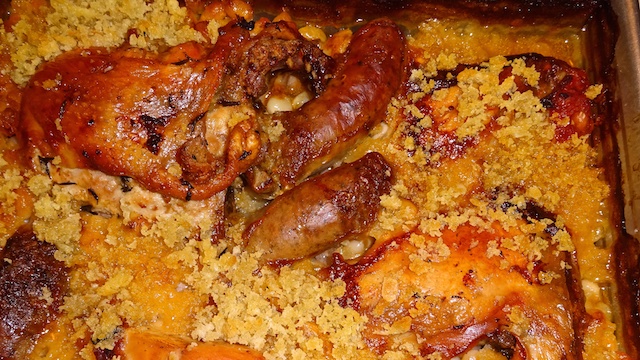 « The Pain of Being Alone
A New Look at Play Bows »