Welcome to an ongoing inquiry about the behavior of people and dogs.
Blog Home >> Dog Behavior >> Aromatherapy for Dogs?

When I was quitting smoking everyone told me how much better my nose would be at smelling wonderful scents. (Yup, I smoked two packs a day in my twenties and thirties. Hard to imagine now.) “Flowers will smell better!” they said. “Just wait until you smell cinnamon buns once you stop smoking!” They were right, things that smelled good smelled better. But they didn’t add that bad smells would smell worse. Sort of like the noontime moon no one talks about in the Arctic. Midnight Sun, yes. Noontime moon in winter? Not so much. Little did I know how aversive were the smells of engine exhaust, moldy hotel rooms and, argh, fox poop.

I also began to notice that different smells seemed to have an effect on my mood and cognitive ability. Engine exhaust made me grumpy, and moldy rooms made it hard for me to concentrate. Lucky for me, that phenomenon also worked in reverse. I learned to carry tiny inhalers with me when I traveled that counteracted some of the aversive smells. I sprayed lavender on my pillow in hotel rooms, carried tiny inhalers in taxi cabs and spoiled myself in scented bubble baths when I needed something special. One person’s experience is only that, but I can say that controlling my aromatic environment has had a huge effect on my life. I wasn’t randomly using scents just because I liked them (although that doesn’t seem like a terrible idea). I knew that lavender was said to calm and relax (vaguely remembering a study on newborns that found infants on lavender scented blankets slept more and cried less), grapefruit to stimulate and lemon to rejuvenate. These are just a few examples of the effects scents are believed to have on mood and behavior in humans.

This is not new, people have been using scents to influence mood and behavior for centuries. The Egyptians are famous for their use of scent to not only affect internal states, but also as medicines to heal disease and injury (not to mention as aphrodisiacs). These beliefs are now being confirmed by research. According to an article in The Herb Companion (Nov 2011), researchers have found that some oils (rosemary, basil) stimulate beta brain waves that indicate heightened awareness, while others (lavender, jasmine, neroli) produce more alpha and theta waves which are correlated with being relaxed. Scientists at Memorial Sloan-Kettering Cancer Center found that the scent of heliotrope significantly reduced anxiety during treatment, while a study  published in Lancet found that lavender helped the elderly fall asleep quicker and sleep longer than prescribed drugs.

But aromatherapy for dogs? Really? Well, on the one hand, why not? They are scent driven mammals, and have every reason to be effected by their sensory environment as are we. The question arose after I received bottles of room mists for dogs from a friend and now producer of essential oils for dogs, Nancy Tanner in Bozeman, Montana and The Scent Project.  Hearing that Willie was going to be crate restricted for many months, she sent me a large bottle of Calm, a blend of High Elevation Lavender and Chamomile. It was wonderfully thoughtful of her, and I greatly appreciated it. Did it help Willie? I can’t say definitely, I have nothing to compare it to. But I can say that he was calmer in his crate than I expected him to be. I can also say that Nancy sent bottles of all the scents in the project along, including (among others) OOMPH, to cheer and heal, ReFresh to sooth but stimulate, and I’ve tried them all. Do they help Willie? I don’t know. I think so, but a one-dog anecdote is hardly research. Do they help me? The heck with Willie (just kidding), I love using them. It seems as though they have an effect on me (and if it’s placebo who cares?) and suspect that they do on Willie too.

One of my questions, though, one I’ve asked for years when this has come up, is how do we know that a scent that calms us would calm a dog? After all, they love the smell of fox poop and aren’t usually big fans of perfume that people pay hundreds of dollars for? Could it be that by calming us, lavender indirectly calms our dogs? Or does it work directly on them, even though they perceive scents differently than we do? Any thoughts? I’ll ask Nancy to chime in, along with other people who use aromatherapy on dogs.

MEANWHILE, back on the farm. Brrr, parka, hat and gloves time. Frost on the grass much less the pumpkin. The color is mostly gone, but it’s still a few weeks before the world turns brown, grey and white here. There’s a bounty of food everywhere. I made more apple butter last weekend, and will spend a few hours processing a plethora of broccoli (thank you friend Harriet!) for the freezer. Willie, Jim and I now have broccoli for the year. We picked up our local, organic chickens, and the freezer is beginning to bulge with fruits, vegetables and local chicken, pork and our own lamb. I’m already working on a menu for a special dinner for Jim this weekend–roast chicken with sage stuffing, local organic sweet potatoes and home made apple pie is on the menu. All from no more than a few miles from here, that makes it feel especially sweet.

Willie is doing pretty well, but is a challenge right now. As expected, his extra freedom has stimulated him so when he’s out of the crate he’s super active. (Just occurred to me to use Calm room mist before I let him out.) Watching him be off leash, although still in the hobbles, is a mixed bag for me. On the one hand, the first time I let him play with a toy a few days ago I got tears in my eyes. I wish I could show you a picture of his shiny eyes. I do not remember him ever looking so happy. But as he played he charged around the room in ways I’ve spent nine months trying to prevent, and even though he has on the hobbles it’s not clear if it is going to set him back. I have to try, but argh, it’s scary! We’re experimenting, given him a little freedom here and there, trying to find a balance between sanity for him and not too much stress on his shoulder. Cross your paws.

Here are the trees behind the barn right before the sun dropped behind the high pasture’s hill. I took that when I started writing this, now it’s pitch dark. Time to go rustle up some dinner… 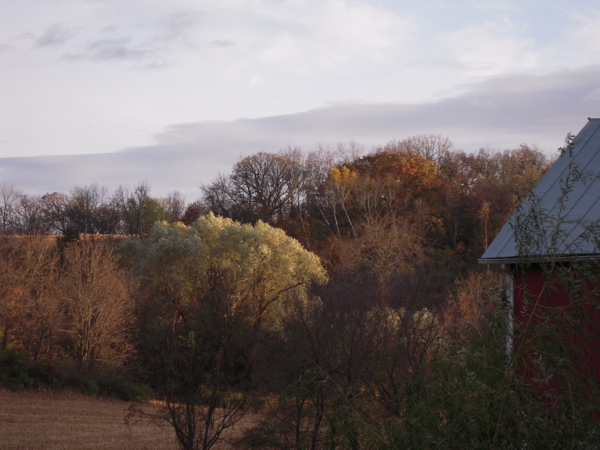