Welcome to an ongoing inquiry about the behavior of people and dogs.
Blog Home >> Animals and the People Who Love Them >> Assessing “Assess-a-Hands”

When I began working as an animal behaviorist I evaluated dogs in a number of ways, one being to give them a prized resource and watch to see how they responded when I reached for it. I remember working on a stage with a dog who was said to bite if you tried to take away his toy. After playing around with him to get him comfortable, I gave him his treasured toy and let him settle down with it. Then I squatted down beside him and began to reach toward the object with my hand. I explained to the audience that I wanted to see not so much whether he would growl or try to bite, but the expression on his face as he reacted to my outreached arm. Was his commissure forward in an offensive threat? Or backward in a fearful grimace?

Over a hundred people held their breath as I reached closer and closer to the dog. I was riveted to his face, fascinated by how he might behave. I felt confident that I would see signs on his body or face that warned me he was getting close to the edge long before an actual bite. True enough, as my hand got within inches of the toy, his body went stiff and still, and the corners of his mouth moved forward in warning. “Got it,” I said, and withdrew my hand. I rarely repeated this procedure, not wanting to teach the dog to growl or snap, but I did this one test on a great many dogs. I don’t know many individuals I evaluated this way, but it was in the hundreds, if not thousands.

Years later, Sue Sternberg introduced us all to the “Assess-a-Hand.” (Let’s call it an AAH.) I watched her use it once, and never looked back. It’s strange, I don’t remember ever being frightened of being bitten in those early years, but as soon as I had another alternative I jumped onto it like a flea in a circus. Since then it has become a standard piece of equipment in behavioral evaluations, but a controversial one. Someone recently asked me how I feel about them, and it seemed a good time to add my voice to the mix. Here’s the bottom line: AAHs can be great, and they can be awful, depending on how one is using them. It depends. (Heard that from me before?)

The good: Assess-a-Hands can indeed be a great tool for evaluating whether a dog resource guards or not. This is valuable information to know, for anyone deciding where best to place a dog, and/or what kind of work a dog needs to be safe and happy in anyone’s home. I’m not convinced that it matters whether the dog perceives the hand as “real” or not, as long as the dog perceives the hand as something that he has to guard against. I can tell you, from using it in so very many cases, that dogs vary tremendously in their response. Some dogs lick the hand, some ignore it, some start eating faster, some go stiff and still, some go stiff and begin to growl, some snap at it. A few dogs, without any warning growl whatsoever, latch onto it and shake it in a fury. I worked with one dog who ignored the hand and lept up in an attempt to bite my arm, this after I merely moved the hand to within a few feet of his toy. If I recall correctly, the dog was being considered for adoption by a family that included four or five children, several of them under the age of six.  Needless to say, I suggested that they might choose another candidate. Stories like that suggest that AAHs  are tools that can do a lot of good.

The Bad: Anything with the power to do good usually has the reciprocal power to do harm. That is as true here as it is with scalpels or medicines. I’ve seen an AAH used to harass a dog far beyond the point of reason. I’ve seen dogs approached so often with an AAH that one wants to yell “#%^*$#, Leave The Dog Alone!” Evaluations are not excuses to harass a dog. I should mention here that one can “evaluate” a dog without an Assess-a-Hand and still cause problems. One client came to me with a dog who had been “evaluated” by someone who tied it up, and then approached it in a stalking posture, with a baseball bat held up in the air as a threat. As the “evaluator” got closer he began to yell at the dog. When the dog attempted in desperation to escape, the man continued going after him. The dog finally began to growl when it was completely trapped, and was deemed “aggressive.” Euthanasia was suggested. Good grief.

The Ugly: There’s more. If one pushes an AAH repeatedly toward a dog, withdrawing every time one gets a reaction, it is relatively easy to teach a dog that growling is the ONLY way to be left alone while eating. Exactly the wrong thing to teach a dog; we should be teaching the opposite. That is why there needs to be a carefully followed protocol that avoids random swipes with the hand regardless of the dog’s reaction, and clear boundaries about how and when the hand is presented. Notice how the hand is presented only twice in this video of the SAFER test used by many shelters, including the ASPCA.

One last comment, because the use of the hand brings up a good question that deserves an answer. Is any test 100% predictive of how a dog in one context will behave in another? Nope. Just ask my friends how I behave when I’m working, compared to how I behave after I have a martini. But there is data that evaluations, if done carefully and consistently, can increase the probability of predicting how a dog will behave in another setting. It is always good to have a lot of tools in one’s tool box, and an AAH is a good one to have, as long as it is used correctly.

If you’d like more information, here’s an article by Dr. Emily Weiss at the ASPCA about this very topic, and here’s a delightfully funny video about how a person might react if tested in a similar way. This will stop you from trying to temperament test someone who is eating a slice of pizza.

MEANWHILE, back on the farm: It’s melting! Slowly, gradually, not very much, but still, we have achieved meltage. Right now there is still a lot of snow on the ground, but one can see soil in some place, and it’s not ten below in the morning and is actually going to stay above freezing a few days out of the week. T-shirt weather!

The cats are out of their cozy igloo, the one lined with a heating pad, and playing among the pines. The sheep are wending their way up the hill (still snowy and icy), optimistically looking for something besides hay to eat. They’ll have to be patient.

I have one more Contemplative Photograph class this session, although I have to admit to not finding any inspiration outside yet.  Snow. Ice. Brown. Grey. White. Yada Yada. I probably should be more creative, but I just couldn’t get inspired out there. So I turned my focus inward. Here are some inside shots I took of, wait for it….. the dogs! Imagine that. 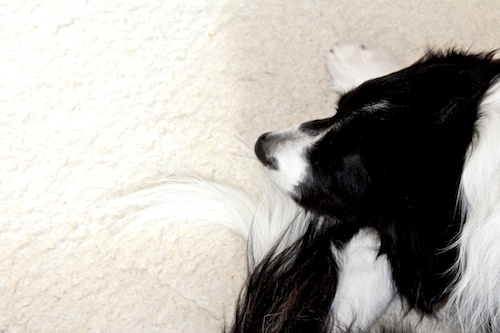 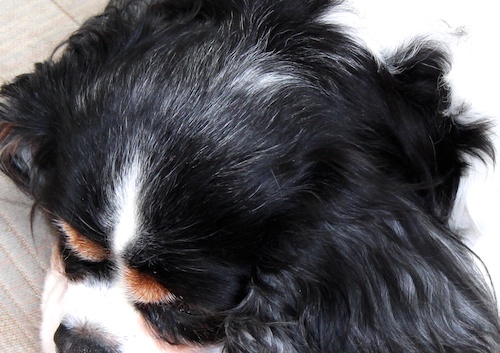 « A Memorial: Fund Raising for Puppy Up!
Favorite African Photographs »