Welcome to an ongoing inquiry about the behavior of people and dogs.
Blog Home >> Canine Cognition >> Autonomy & Domestic Dogs

How much autonomy does your dog have?  Willie’s work with sheep is  what motivates me to ask this question. As I mentioned earlier, Willie and I attended a sheepdog clinic 2 weeks ago with Patrick Shannahan, and the big take away for us was that, too often, Willie looks to me to tell him what to do while working sheep. It’s not that he doesn’t know what to do himself, he’s just in the habit of being dependent upon me to tell him before he takes action on his own. This was not a complete surprise to me, but I didn’t realize what a significant issue it was until I worked with Patrick.

I think I know why this has happened: First, Willie is a naturally biddable dog and dependent dog. I chose him over his 7-week old brother because Willie seemed to care deeply about where I was and what I was doing, while his sibling was busy independently exploring the universe. In spite of a long list of serious problems that developed in Willie’s youth (projectile diarrhea, a ridiculous level of sound sensitivity, a pathological fear of unfamiliar dogs and an extreme problem with impulse control) Willie has always been an especially responsive dog.

Here’s a recipe for a dog unwilling to act independently: Mix 1) Willie’s personality with 2) 14 months of recovery from a shoulder injury in which one is a virtual prisoner. After his injury in early February, we tried complete leash rest for all of Feb and March. When that clearly wasn’t enough, we decided on the surgery, but Jim’s sister was dying of ovarian cancer, so we put the surgery off until May. After the surgery he basically lived in his crate for 1-2 months, and then gradually was allowed to do carefully structured physical therapy, all under my control, until January of the next year. Gradually after that he was allowed limited amounts of free time, but basically we are talking a about a dog who lost all autonomy whatsoever for a significant period of his life, an inevitable response to his recovery. Don’t get me wrong, he got lots of mental exercise: I spent over 2 hours a day with him on PT (which he saw as games) and any trick he was allowed to do, but the fact is that he went from a dog who was outside off leash for hours a day to a dog whose every movement was controlled and monitored. He came out of it thrilled to be able to play with his toys again (14 months after the injury) and get his life back, but lost a lot of confidence working sheep.

My job with sheepdog Willie right now is to let him make a lot of decisions on his own. I’m providing feedback (“Yup, that’s right,” or “Nope, that was not the right decision.”) or just letting the work speak for itself. Willie has enough experience to know when things are going well, so often I’m just shutting up. (Never the easiest job for a dog trainer, right?) I can’t tell you how this is going to translate onto a trial field next year, but we are having the most fun I think we have ever had working together. It’s wonderful, just wonderful.

I’m relaying this story to you because I think the issue of autonomy is highly relevant to companion dogs everywhere. A journalist asked me once, “What do dogs want?” And I answered that, beside the obvious primal needs of food, water and shelter, dogs want 1) positive social interactions and 2) opportunities to make decisions on their own. Certainly too many dogs still suffer from a lack of social interaction, being tied up in backyards or kenneled by themselves until hunting season begins. But I suspect that many beloved dogs who are surrounded by love and attention suffer from a lack of freedom of choice. Of course, we can’t know for sure, we aren’t dogs, but sometimes it is useful to compare the needs of two different species, especially if they share so much and live together. As humans, being able to make choices about our lives is our most important possession. It is one of the things that we take for granted until we lose it, like water to drink and good health. Only when it is lost do we realize how precious it is. Ask prisoners about their time in confinement and they will tell you that the worst thing about it is having no autonomy. Want ice cream after dinner? Too bad, not being served. Want to stay up a little later one night and read? Sorry, lights out at 10. Most of us haven’t had that experience, but we can remember when we first had some control over our lives as teenagers. and the giddy joy of being free to make decisions on our own about what to do at any given moment in time.

It is certainly true that many companion dogs have little autonomy, and that is not always a bad thing. They go outside when their owners open the door, not having learned yet how to open doors on their own (thank heavens).  They are often on leashes, and therefore safe from being hit by car. But they are also unable to make decisions about where to turn, which way to go, and how long to spend on one spot. Their elimination behavior is controlled by us once they are house trained. Granted, gazillions of them pick up one of their numerous toys and decide when it’s play time by dropping it in our laps, and plenty of dogs have got their owners pretty well trained….

But, still, compared to feral or free-ranging dogs in other countries, some of our own companion dogs live relatively constrained lives. Granted, they often get better medical care than most people, organic food and acupuncture, but you could argue that they also lose something in the process. Author Ted Kerasote talks about this as well as anyone in his book Merle’s Door, and if you haven’t read it, I highly recommend it. (And FYI, he has a new book coming out in February, Pukka’s Promise: The Quest For Longer Lived Dogs. It is beautifully written, extremely thought-provoking and summarizes five years of kick ass research. Here’s part of what I wrote about it for the back cover: “…one of the most important books written about dogs in a decade.” I’ll write a real review of it long before it is released.)

There are many ways dogs can have more autonomy as companions who can’t safely run free or work sheep: Some of them are small things, like asking a dog if he is “Ready” to do something or not. (See discussions about this in an earlier blog.) Leash walks can be directed by dogs as often as by their owners. (“Which way do you want to go?”) I think most important to dogs is to be able to explore the out of doors off leash. There’s nothing like a long walk in which a dog is allowed to run here, sniff there, and be free to explore at his or her own pace to make a dog healthy and happy. Nose games for dogs are great too: dogs get to play to their strengths and make decisions based on their natural abilities. I’ve seen many dogs who gained confidence and what only can be called joie de vivre after playing nose games with their owners.

I’d love to hear more ideas from you about how to give dogs more autonomy, especially ones who can’t safely run free in their home neighborhoods, or anywhere else for that matter. I expect a lot of dogs and owners too will profit from hearing your ideas.

MEANWHILE, back on the farm. I’ve recently heard from three of the people who adopted the kittens who were born on the farm this summer. All kittens are doing wonderfully. One kitten is best friends with the family dog, and cuddles up with him every night. One kitten is a fireball, and her owners adopted a second kitten to give the older resident cat a break! All the kittens seem healthy and happy, and it makes me happier than I can say that of the 12 feral kittens born in my and my neighbor’s barns, all 12 are in good homes, well taken care of and will be spayed or neutered to prevent more feral cats roaming the woods. Speaking of, it’s time for kitten Polly to get spayed too. Time flies.

And, oh yeah, one more piece of news: After twelve wonderful years of being each others best friend, Jim and I are getting married tonight. I’m thinking you’ll forgive me for taking the night off and staying off line…?  Happy Dance. 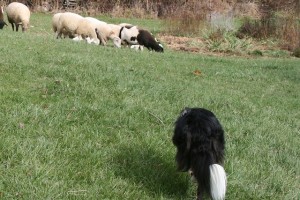 Here’s Willie this morning, driving the sheep away from me. His job here is to keep them going in a straight line.

Notice how the sheep are beginning to drift to the right. 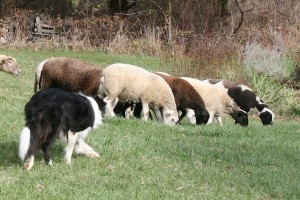 Rather than telling Willie to counter that, I stayed quiet and let him take care of it. You can see him already starting to shift to his right too. 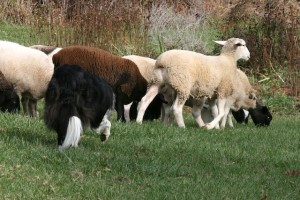 The sheep are still drifting right, but Willie is continuing to counter.

Voila. Sheep moved back into the correct position. Willie 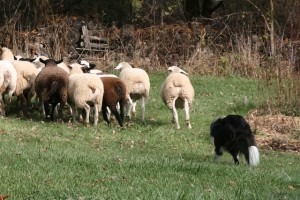 did it all on his own, and I managed to keep my mouth shut. Will miracles never cease?