Welcome to an ongoing inquiry about the behavior of people and dogs.
Blog Home >> Border Collies >> Barbie & Willie, Mad Dogs and Englishmen

I originally called this post “Barbie’s Not Always a Nice Girl,” but then I thought about what the title would look like on Google and the kind of people who’d click on it. Hmm, not really my “brand,” as they say.

I thought though, that you’d be interested in yet another interaction between Barbie, my cantankerous, lead ewe and Willie. Barbie, as you may recall, is the only sheep who has ever seriously challenged Willie. She won a few times when she had three-week old lambs this spring, literally chasing Willie away, her anvil-like head down and ready to bash Willie into the ground. He ran away like a frightened chipmunk, because Barbie was serious, and because we all know she can be a witch, and because well, he’s just not the bravest dog in the world. That’s partly why I love him so much, because he’s not perfect and neither am I, and he still tries his best, and when I’m being who I want to be, so do I.

Here are photos I took just a few minutes ago (Willie is still panting rapid fire at my feet.) First we found the sheep lolling in the shade of the woods on a steep hill between the barn and the main pasture. Barbie was lying by herself under a dead tree. 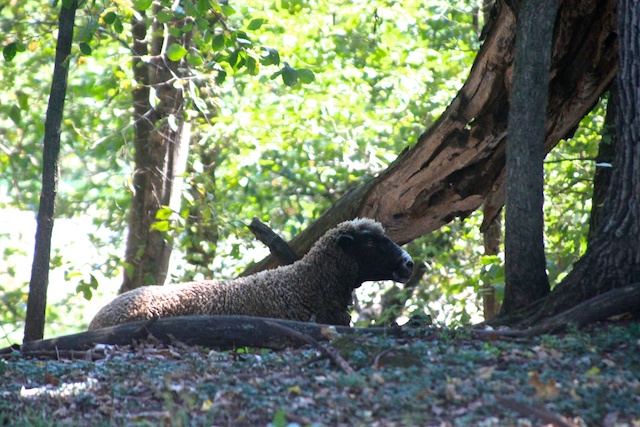 Soon after I took this photo she grudgingly got up (who could blame her? — it’s mid day and hot outside) and trotted down the hill with the others toward the barn. Willie picked them up (eventually, more on that later) and we moved them into the Orchard pasture and practiced driving a little bit.

In this next photo you can see, as is often the case, Barbie being the last to move away from Willie and turning  her head toward him. I imagine her saying something like “Your mother eats kitty litter.” 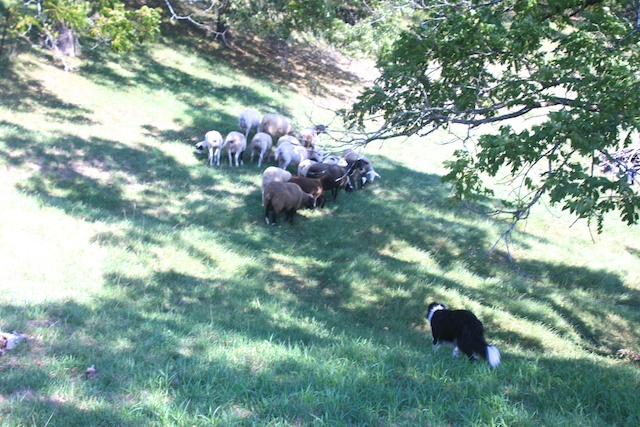 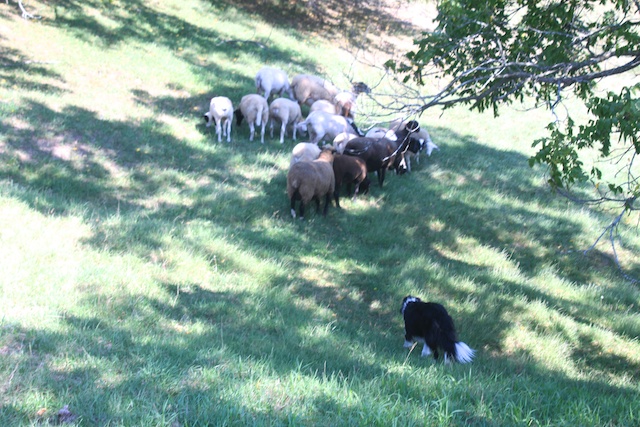 You might ask yourself at this point: “I get the Barbie and Willie title, but what’s with the mad dogs and Englishmen in the title? Simple: Remember “mad dogs and Englishmen go out in the noonday sun?” (Words in an old song for those of you not familiar.) We were working in the noonday sun, and I’m wondering if I had a mad dog. Not “mad” as in with rabies, but “mad” as if angry.

We all know how often people wrongly assume their dog is being disobedient because they were “mad” at them. Usually it’s confusion or mis-understandings or pain or fear or anything beside the fact that some dog is ticked off at its owner. But, here’s my question to you: Can it EVER be true, even if rarely? Are dogs ever truly irritated by their owners, especially while doing difficult work? I wondered this while I was working/photographing Willie for this post. He behaved atypically: he didn’t listen as well, he seemed slow and disconnected. But more than that, he gave me a look a few times that was hard to interpret as anything but some canine equivalent of a finger. There are several reasons he could have been off his game: We’ve been working on driving for an upcoming trial, and it’s difficult, tiresome work. I think it’s stressful to dogs (constant whistle signals given out 2-3 to a second), and especially to dogs like Willie who don’t like being in constant contact with the sheep.

In addition, during the “photo shoot” the sheep got all the way back to the barn before Willie could round them up again, in part because I was busy taking that first photo of  Barbie. It’s hard work running down the steep forest floor, going into the small, enclosed area of the barn and forcing the sheep back up the hill. He wouldn’t have had to do it if I’d been paying more attention. Hummm.

It’s far more likely that Willie was tired from our work of the past few days, or maybe his shoulder was hurting. But that look he gave me started me thinking: Although most attributions of anger as a motivation for disobedience are undoubtedly incorrect, are they always? Have you had an experience in which you had good reason to believe that your dog was irritated by your behavior? I’m curious.

MEANWHILE, back on the farm: Today is all about wrapping up work and leaving for the WWSDA herding dog trial up in northern Wisconsin this weekend. Willie and I run in our first big Pro-Novice course  against some of the best dogs and handlers in the country. The outrun will be 250 to 300 yards, the drives through 2 drive panels ridiculously far away and over my skill set, and the sheep have never been worked by dogs until the day before. If we get numbers (ie, a score) versus letters (ie DQ for Disqualified or RT for Retired) I’ll be satisfied. If we get in the top half (there are about 42 entries) I’ll be thrilled. If we do any better than that I’ll be over the moon. Tonight I’m going to work Willie when it’s cooled down, and just ask him to do some simple, easy outruns. Then tomorrow he won’t work all day, so he should get a good rest. He deserves it.

I know several of you compete in a variety of dog-related sports, from Agility to Sheepdog Trials. You’ll understand then when I say that all I really want is to not let my dog down.  I have worked with dangerous dogs for decades, but standing at the post about to run my dog is a million times more nerve wracking to me. I am basically a lousy competitor because I get so nervous, but yet some strange compulsion is getting me back into the sport. So cross your paws that I don’t throw up at the post in front of all the other handlers, and am able to keep my senses about me enough to handle my good dog Willie as well as he deserves.

« Helping a Dog Through a Loss
Video Analysis: What’s Up with Willie? »