Welcome to an ongoing inquiry about the behavior of people and dogs.
Blog Home >> Animals and the People Who Love Them >> Barn Swallows: Excerpt from The Education of Will

Oh my. I feel like I’m at the crest of a massive roller coaster, having chugged my way up and up and up, finally reaching the top of the curve, and looking down at a track so steep that I can’t even see it beneath my feet. All I know is it’s going to go down, very, very fast.

That’s what it feels like today, as if I’m at the beginning of an exhilarating and scary ride, the first day of the next and last phase of the making of The Education of Will. One might think that once you’ve “finished” a book you’re done, but in actuality your work just changes. If you are lucky enough to have your book picked up by a major publisher, there are great expectations on you to polish and promote your book. I’m done with the polishing (several edits even after the “pre-pub” version came out, sent to book sellers), done with working on the text for back cover and inside flap (as hard to write an in entire book sometimes), have created a website just for the book, updated my regular website to be mobile responsive, etc. etc. All of this, I should add, with a village of help from many talented and wonderful people, for whom I am eternally grateful.

Now it’s time to get on Twitter (argh, heaven help me), study and implement the publisher’s guide to an author’s responsibilities, write my talks, finalize arrangements for the tour. Etc. As I used to chant before I walked up onto a stage to give a speech (writes the woman who was so shy that in her early twenties she could barely make eye contact with strangers): “I’m not nervous, I’m excited.”

And so, as the first act of the last phase of the memoir’s launch, here’s an excerpt from the book itself. I’ll take the risk here to admit it’s one of my favorite passages. It’s not actually about me or Willie; but of course, it is:

Every summer, barn swallows chitter just a few feet away from my study, skimming the air currents, landing precariously on a rope we strung up on the porch for the attachment of holiday lights. When Willie and I go outside, the birds swoosh away and begin swooping over the grass to snatch up more insects. Last spring a swallow nested in the garage, her nest built of mud and fiber on top of a light fixture. It was a foolish choice, because each day I’d leave the farm and close the garage door, keeping the parents either shut out or trapped inside while I was gone. I’d drive back to the house, press the automatic door opener, and the adults would swoop in or out, squawking in what sounded like avian anger, desperate to get to the nest or out to feed. After a few days, I left the garage door open, unwilling to witness the slow death of a poorly placed clutch of baby birds.

Each day the chirps of the babies got louder, and soon they were so big their bodies leaked over the edges of the nest, like a blousy woman overflowing her bra. They began flapping their wings and leaning precariously into the air. I worried they would fall before their wings were strong enough to hold them. I kept the cat inside, and while she paced and yowled behind the door, I talked to the birds: “Hurry up, it’s time to move on.”

And then one day when Willie and I left the house on our morning walk, all five baby birds were straining so far out of the nest that I knew their first flight was inevitable. One at a time, they dived out and flapped in sloppy circles all around us, their movements uncoordinated and seemingly inadequate to keep them aloft. At the last minute, as they descended closer and closer to the ground, their wings took hold, and they managed to stay airborne. They fluttered for a few more seconds, seemingly at the edge of disaster, and then slalomed out of the garage and crash-landed into a nearby spruce tree. But they took off again, and gradually, flap by flap, the movements of their wings became more coordinated. Their paths through the air became cleaner, more purposeful.

They began to dip and turn, faster and faster, until within just a few minutes I was surrounded by five expert flyers, zooming right and buzzing left, streaking toward my face and banking away at the last minute, so close I could see their eyes shine. Willie and I stood together, still and silent, smack in the middle of the most amazing air show on earth, performed by five miniature pilots with the right stuff. As they swooped and soared around us, they appeared to be overwhelmed with the beauty and power they had inside themselves all along—they just had to take the risk to find it.

And here they are, a photo of the actual barn swallows that I wrote about above, a good week before they grew fat and strong and couldn’t resist the pull to fulfill their destiny. 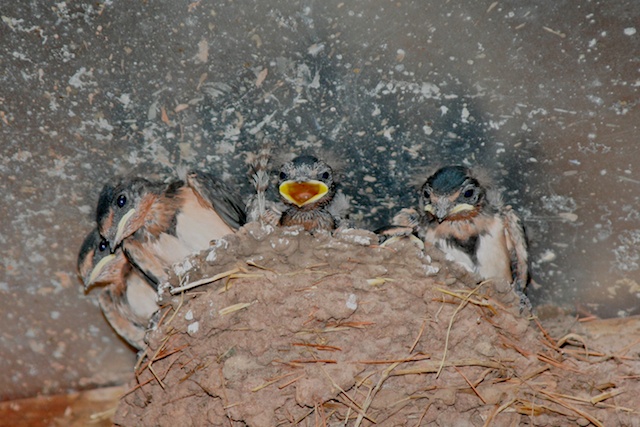 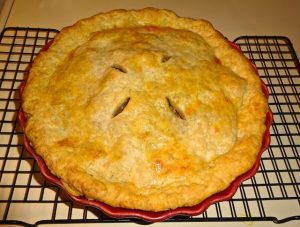 MEANWHILE, back on the farm: We had a lovely quiet week of cooking, eating and laughing with friends, going to movies (Moonlight, La La Land, Fantastic Beasts and Where to Find Them), compulsive cleaning out of papers and cabinets, long walks, and even some time working sheep with Willie and Maggie. It’s too icy around the barn and on the farm road that leads up the hill, but if the sheep are already up in the high pastures it’s safe to work.

I wanted to include a photo of Willie working the sheep, but he was gimpy this morning so he needs to rest. Maggie and I worked the sheep just now, but I was so focused on our work together that I forgot to take any pictures. Here’s the flock though, after I said “That’ll Do” to Maggie, and we let the sheep move into the woods. Too icy there to work, so I let well enough alone and took their portrait. That’s Lady Baa Baa in the front on the left. Yeah, they’re fat. I’m sorry. 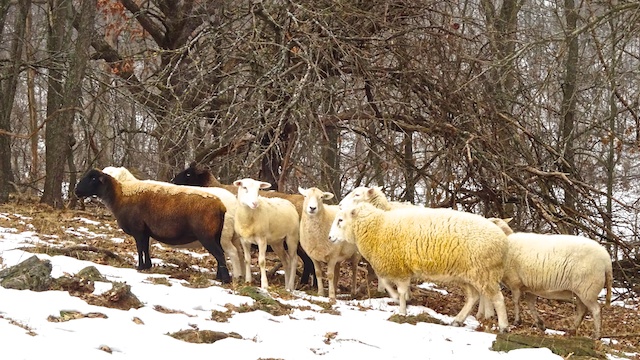