Welcome to an ongoing inquiry about the behavior of people and dogs.
Blog Home >> Border Collies >> Best. News. Ever.

Today, it’s all about the farm. I had a blog written about the effect of acoustic environments on us and our dogs, some new products available for us to use to calm our dogs, and some new results of “calming” music that Katie and I have seen with our dogs. And then I erased it all with one key stroke. I’m sure that has never happened to you….

So I’ll save that topic for later (and promise to catch up in the next month or so on other topics I’ve promised you, like exercises to calm the sympathetic nervous system, and the methods of the clicker versus no-clicker study ). Right now I have to get home to the dogs and work on the talk that Karen London and I are giving at the Interdisciplinary Forum on Applied Animal Behavior next week in Phoenix. So here’s the second half of the blog, which I somehow magically managed not to erase:

BEST. NEWS. EVER. Willie worked long and hard in an unplanned emergency sheep herding session at the UW Stock Pavilion last Tuesday, and he came out of it none the worse for wear. I’d been easing him back into herding with 3-4 minute sessions and easy work, but had to quit 2 weeks ago when I sprained my Achilles tendon and couldn’t get up my own hill to work sheep. I tried to find friends to help with the sheepdog demonstration I do for my University of  Wisconsin class (“The Biology and Philosophy of Human/Animal Relationships”) but none could bring their own dogs. So I planned to do a shorter than usual demonstration with Willie to ensure that I wouldn’t set back a year’s investment in getting him sound again.

Long story short: After loading 2 of the larger ewes into the truck (not so easy without Willie to help), Rosebud and her lamb Oreo escaped between the fencing and the truck. Oh shoot. No way could we get her back without Willie, so I let him out and we set to work again. Even with him working hard, it wasn’t easy; Rosebud had little interest in coming back toward the truck and the students surrounding it. But finally we got her in the truck (I say “we” in the sense of nurses saying “It’s time for us to take our medicine again” — Jim and some very helpful students hefted her into the truck while I and my stupid ankle stood by uselessly). Whew, okay. Four down, one to go.

Now the only sheep left outside of the truck was Oreo, who promptly jumped the fence like a Dutch Warm Blood. And now I had a single, panicked ewe lamb in a dirt arena surrounded by cement bleachers. Not good. Single sheep are so frightened they are unmanageable; and it was clear that Oreo was considering a Mission Impossible suicide run up into the bleachers. I once watched a demonstration in which a single, panicked ewe died when she ran herself into a cement wall and broke her neck. Not a good image, but a good reminder to never, ever, ever try to work a single sheep who is truly panicked. Leave it alone, and go get the rest of the flock to pick her up like velcro.

With that in mind, Willie and I managed to cut off Oreo’s consideration of a Tom Cruise like escape, and keep her on solid ground.  Once we had her stopped, I yelled to Jim and others to “Let Rosebud out of the truck.” Believe me, “Let Rosebud out of the truck” is a figure of speech. At this point Rosebud had no interest in leaving the rest of the flock, so after the understandably stunned reaction of “You want us to WHAT?”, Jim lept into the truck and pushed poor Rosebud back out. As expected, Oreo ran right to mom, and calmed down considerably. But it took a tremendous effort from Willie, who was then joined by Jim and students to get the two back toward the truck and back inside.

The entire time my heart was in my throat. If a sheep was badly injured or killed I’d probably never do the demo again, and the students tell me it’s a highlight of the course. I’d never forgive myself if a student was injured. But Willie? Willie was cutting right, cutting left, working like a quarter horse to keep Rosebud & Oreo coming toward the truck. They’d dash one way and he’d have to counter, none of the rest of us was fast enough to stop her. It seemed to go on and on… was all this work going to set him back? Once we finally got everyone loaded, I drove home with my stomach twisted into knots.

Willie, on the other hand, sat in his crate on the way home with what I can only describe as a face radiating joy. His tongue stayed bright red for an hour after we got home, but his happy, happy face stayed on all night long. And I won’t say all that hard work didn’t affect his shoulder: he was reluctant to do his stretching exercises that night. But no limp, no favoring, no hiking of his shoulder, and the next day he stretched his leg out like a gymnast. He looks great, strong and sound, and he’s never looked happier.

I’ve got my dog back. My dog has his life back. Happy Dance.

Here’s a photo that shows Willie and the Stock Pavilion. Class hadn’t started yet, Willie and I were putting the sheep into the pen for safe keeping. 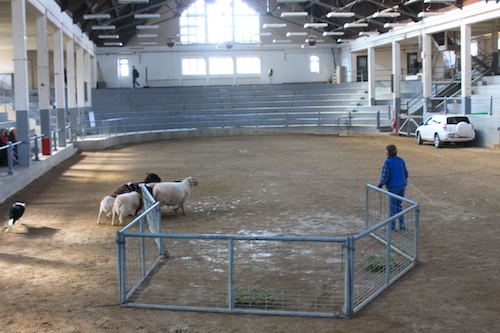 The truck is out of sight to your right. When we went to load them up Jim backed the truck up to the pen’s opening. The fence that Oreo lept over was the back of the pen. She ran to the other side of the arena, and stood on the right, eyeing a break in the railing that led up to the bleachers. The railings weren’t a barrier anyway, she easily could have gone under them.

Here’s the group during the demonstration: Rosebud is in the front, and her ewe lamb Oreo is the pinto in the middle, with the black forequarters and white hind. I’m thankful that they all seem none the worse for wear as well. They are all due to lamb at the end of March and early April, so I’m especially glad that they seem to be doing well once home and settled at the farm. 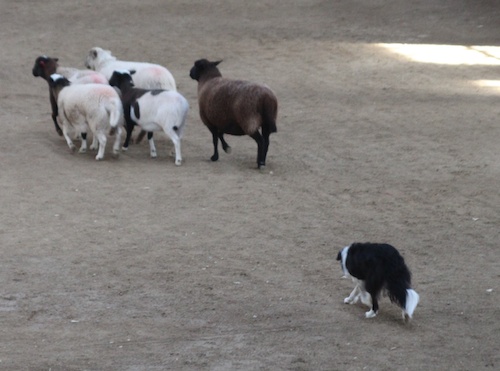