Welcome to an ongoing inquiry about the behavior of people and dogs.
Blog Home >> Animals and the People Who Love Them >> Bewilderbeasts, My Favorite New Podcast 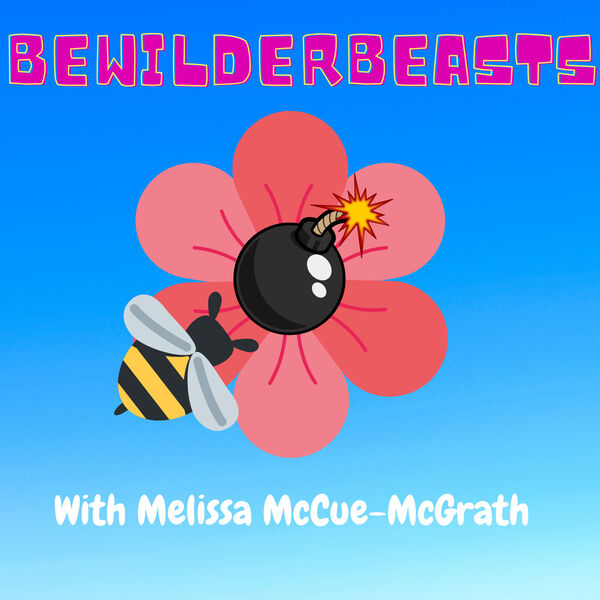 Croatian Bomb Sniffing Bees? (Note the logo!) Bovine Booties? Hilarious penguin poop? How about the cow who gave us public libraries? Interested? I am. No surprise to anyone, I’m an animal lover who is fascinated by animal behavior. I’ve learned that most dog lovers are too–I used to include videos and stories about a range of species in my seminars on dog behavior, and was gratified to learn that people loved it. The all time favorite might have been my video comparing human and chimpanzee behavior. (The comparison being part of my motivation for writing The Other End of the Leash.)

It occurred to me, right before walking out to a huge crowd at an early APDT conference, that the scenes of chimpanzees having sex, given that I was illustrating how similar our behavior was, might have been construed as pornography. (Anyone remember those videos? I should mention that I’m not sure I can even find them now, much less get them to play. Maybe a good thing?)

Chimpanzee sex aside, stories about animal behavior that is bizarre, bewildering and/or educational is just what the doctor ordered right now. Given the state of our world right now, and the impending you-know-what, anything that can distract, amuse and inform us, all at the same time, is a good thing. Melissa McCue McGrath’s new podcast, Bewilderbeasts, is exactly that.

The first episode tells us about research that found painting large eye spots on cow butts in Africa protected them from lions. No surprise if you think about it: Eye spots are used by hundreds of species to scare off predators, butterflies are a great example. Even better, it works on us too. Melissa tells us about a study that found bicycle theft decreased by 65% if the bikes were parked beside two large, staring eyes. Dogs aren’t immune either–which is why dogs are often more afraid of people with sunglasses on. Sunglasses are perfect huge, black eye spots that say “I’m looking at you,” and not in a good way. How clever of someone to paint eye spots on cows to discourage predation. Gotta love it.

Did you know that the poop of King penguins primarily consists of “laughing gas,” or nitreous oxide? No laughing matter Melissa tells us, because nitreous oxide is more damaging to the environment than carbon dioxide. And now I know that nitreous oxide is no longer just used in the dentist’s office: It is now included as a drug that can be abused. Some one tell the penguins to be careful.

But my favorite story so far is about “The Cow Who Gave Us Libraries.” You’ve heard of Mrs. O’Leary’s cow, yes? The one who kicked over a lantern and started the Great Chicago Fire of 1871 that killed about 300 people, destroyed much of the city, and left more than 100,000 residents homeless?  Except, it turns out that this cow part of the story was most probably based on anti-Irish and anti-Catholic sentiment, and had little to do with the actual cause of the fire. The fire started beside, or in, the O’Leary’s barn, but the story of the cow’s kick was written by a reporter, who later came clean that he’d simply made it up. 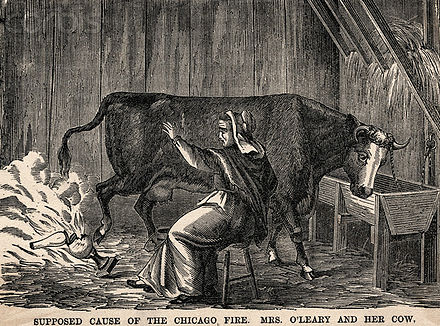 However, the news spread around the world, in part because of the personal interest in the fire being started by a cow named Daisy. (Clearly the reporter knew what sold papers.) The devastation was so massive that significant changes were made in building codes and construction (no streets made of wood, for example). But something else happened because of the newspaper story that we benefit from today. In sympathy for the city of Chicago, the city of London donated 8,000 books. That allowed the city to open one of the first free, public libraries in the country. Libraries existed, but you had to pay to get in. But after the fire free, public libraries became the norm. Given that libraries are some of my favorite places, and the center of many communities, I’d like to tip my hat to Ms. O’Leary’s cow, whose innocence created something wonderful for the entire country. Out of the ashes . . .

These great stories continue on Bewilderbeast, through seven episodes so far. But Melissa tells me that this week (10/21/20) will include Andrew Jackson’s swearing parrot (swearing parrots being in the news), and the week after, appropriately, the derivation of the elephant and the donkey as political symbols. (You’ll never guess, believe me.)

The idea for this podcast came from a virtual summer camp program for kids in Somerville, MA that Melissa did for her daughter and other kids in the area. This fall she found herself a “teacher with no one to teach,” her outdoor dog training classes being cancelled for the season. Add her love of teaching to her love of animals, her devotion to science, and her quirky sense of humor, and you get a delightful, informative, and always funny, funny, funny dose of normality in an otherwise crazy world. I don’t know about you, but following Melissa’s deep dives into the truth behind animal stories that may or may not be true, is just what the doctor ordered for me.

MEANWHILE, back on the farm: Maggie, Skip and I spent the last three days at a Patrick Shannahan clinic, hosted graciously by Laura Wentz. In spite of the cold, wind and occasional sleet, it was a fantastic learning experience for us all and felt Covid-safe given the outdoor setting, the ease of social distancing and a brisk breeze. Laura greeted us to her farm with fall art work: 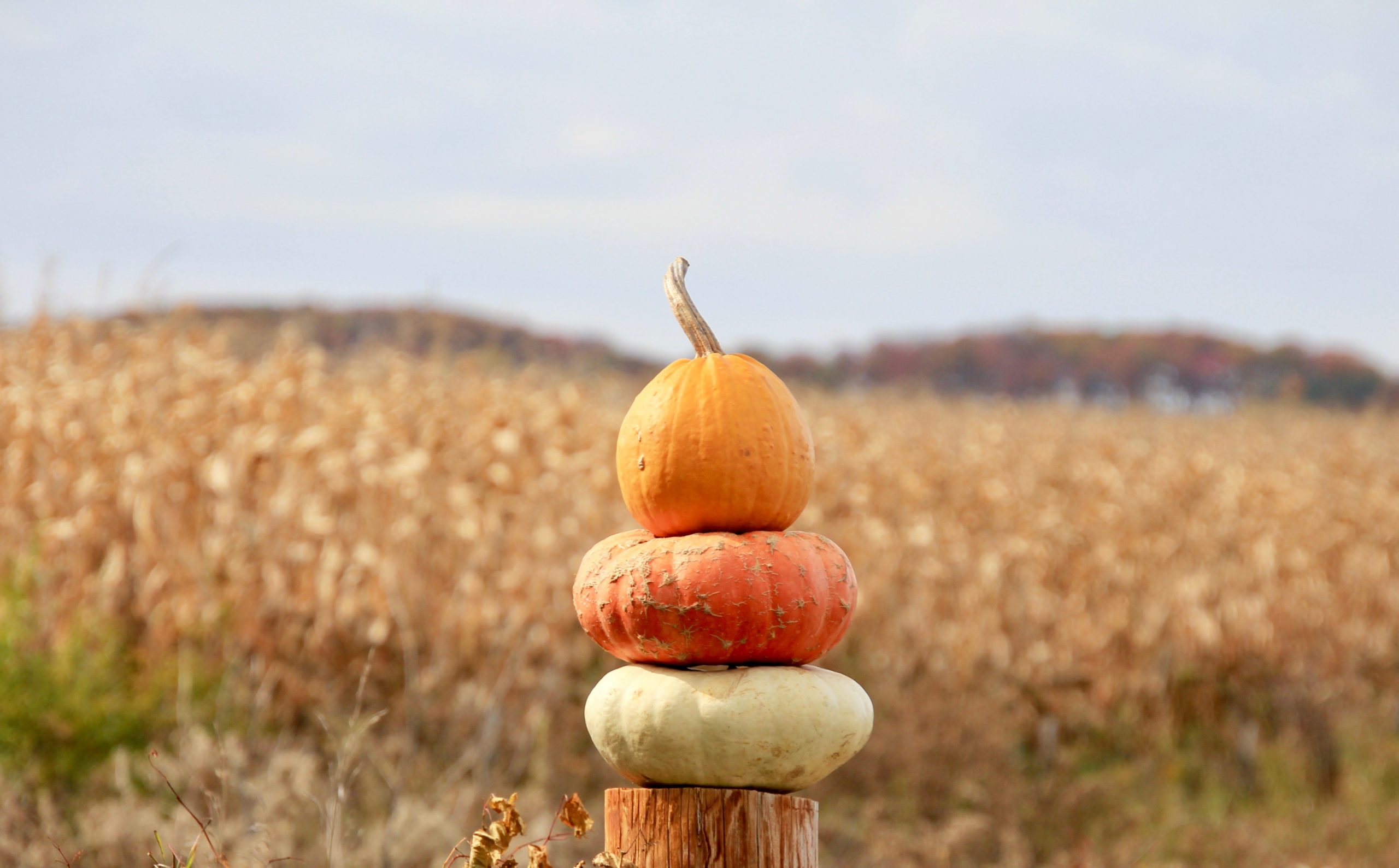 Both Maggie and Skip (and I) had lessons and learned a lot. Now we have our work cut out for us over the winter. One of the pleasures of the clinic, besides chatting with good friends, was being able to keep both of my dogs at my side, off leash, while watching other runs. They are so polite that I could slip into the porta potty with them on a down/stay outside without any fear they’d break. Even when another dog was working sheep not all that far away. So proud of them! 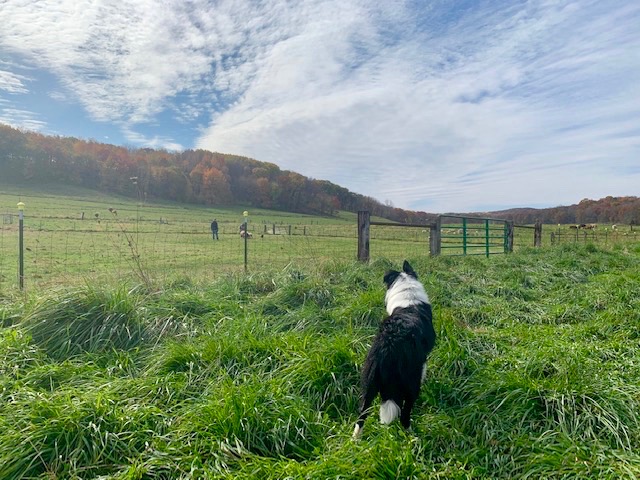 Maggie and I had a bit of excitement when Piper, one of the farm’s guard dogs, leapt over the fence to confront Maggie. She’d been peeling a group of sheep off the side of the small pen holding the rest of the sheep, which also included two large, hard-working guard dogs. Maggie did a fantastic job forcing the sheep away from the pen and the barking dogs, when Piper leapt the fence, and ran between Maggie and the sheep. Okay, stay calm Trisha, I said to myself. I told Maggie to “Stay There, Stay There,” in my quietest of voices so that she would not appear as a threat to a dog whose full-time job is to guard against canine predators. After a quick sniff of her head, the Piper, all of two years old, play bowed and tried to romp with her. It went from Uh Oh! to Adorable pretty fast. But what a good guard dog, hey? Piper’s first thought was to be sure the sheep were safe. Once she determined that, well, why not play?

Here’s Piper, the sheep police/playmate, earlier, in another area (A second guard dog is barking at another dog at the back right): 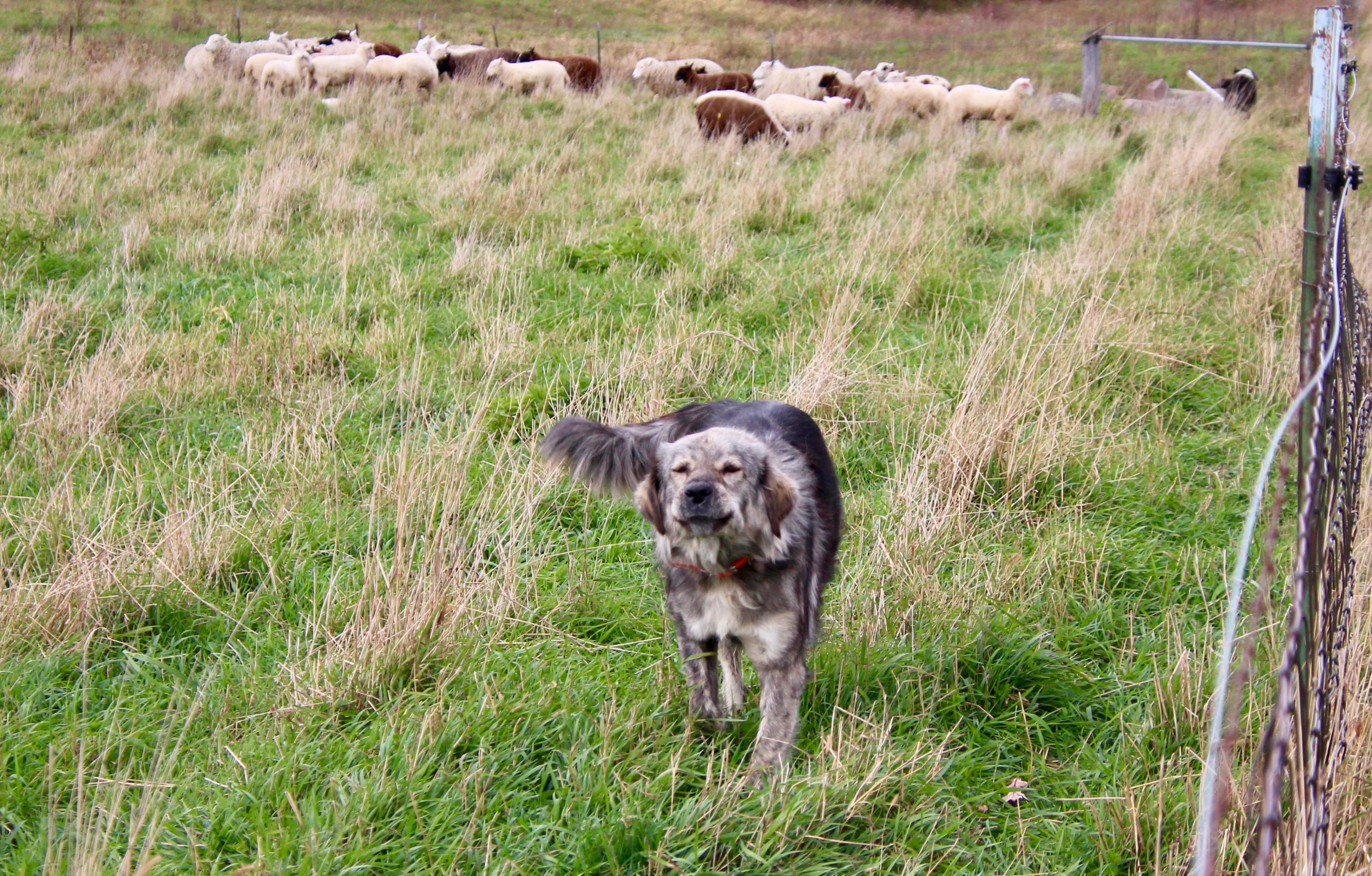 After that Maggie did some lovely driving, which is our great challenge at trials. She seems to do really well except at trials and with one set of “trial wise” sheep, so I’ll be working on learning to handle her better over the winter. Some percentage of her trouble with driving is her, but I guarantee you that the majority of it is me–I just don’t yet know how to handle her kind of dog in such difficult circumstances. But she handled herself well at the clinic. Here she is after being interrupted by Piper and doing some driving, happy as can be while cooling off in ice cold water. Brrrrr.

Here’s to whatever makes you happy this week. And don’t miss Bewilderbeast, it’s going to be one of my touchstones of joy (and sanity) for awhile.

« Maggie! Chester! Princess! (Now That We Have Your Attention, Please Read Our Minds)
Treat Everyone Like a Dog: My New Best Book Ever »