Welcome to an ongoing inquiry about the behavior of people and dogs.
Blog Home >> Animals and the People Who Love Them >> Bigger Dogs, “Smarter Dogs”? Hmmmmmmm. . .

Full disclosure: I used to be a breedist. My family didn’t believe that little dogs were really dogs at all. “Rug rats” they called them. And then, in my second or third week of seeing clients in 1988, a Toy Poodle trotted into my office and proved to me how wrong my family had been. This little dog was as smart as any dog I’d ever met, and won my heart and admiration within five minutes. He was a good teacher too, reminding me for the rest of my life that in terms of intelligence and trainability, size doesn’t matter.

I thought of that poodle when I read a recent study that asked whether larger dogs have a higher level of cognitive ability than smaller dogs. The study, done by Daniel Horschler et. al. at the Arizona Canine Cognition Center, found that larger dogs performed better in some “measures of intelligence”  than smaller dogs. In particular, bigger dogs have better short-term memory and self-control than more petite pups, according to the study published in the journal Animal Cognition. These are both aspects of what is called “executive function,” or the part of your brain that gives you the ability to think long term and turn down a piece of pie because you want to lose weight. (I am not familiar with the action of turning down a piece of pie; this example is hypothetical only.)

I have some questions and concerns about their conclusions, but before I go any further I’d like to turn it over to you. For those of you who have worked with a large variety of dog breeds, have you found that larger dogs, in general, have more self-control than smaller dogs? I’ll tell you what I think at the end of the piece.

Read on if you’d like to learn more about the study and why I have some questions about the conclusions.

Let me explain why the study was done in the first place. (Spoiler alert: It had nothing to do with large dogs being “better” than small dogs.) The question the researchers were addressing is actually related to the size of the brain, and only indirectly the size of the dog. The issue of brain size and certain types of cognition is a hot topic in neurobiology right now. As the authors explain in the introduction their article, the brains of primates are unique, in that as brain size increases, so does the number of neurons.  That’s not true of other mammals, whose larger brains encase larger neurons, but not more of them. It has been speculated that the increase in the number of neurons found in primates correlates with an increase in cognitive ability. (Note: Our brains are huge, six to seven times what our body size would predict, and crammed full of about 100 million neurons.) 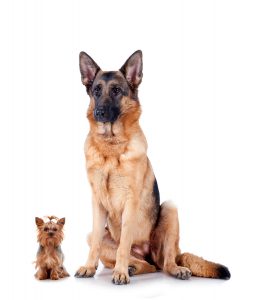 The correlation between the number of neurons in the brain and intelligence is just speculation, and the authors of this study thought one way to address this issue was to compare different sizes of brains within a species. If larger-brained individuals had higher levels of executive function than smaller ones, then the hypothesis that primates are smarter because they have more neurons per inch of brain would not look promising. Following me here?

First off, I should be clear that I am all in favor of comparative cognitive research, and love that the authors are trying to take advantage of our remarkable relationship with dogs to further our knowledge of brain function. But I have some concerns about the conclusions, summarized here.

One concern is about the source of the data, which came from the results of individual people testing their dogs through the “citizen science project” and retail product called Dognition that I’ve written about earlier in a not so glowing review. Although I celebrated the intent, I had lots of problems with accurate scoring, as well as their assessment of the results. Here’s what I wrote about Dognition’s assessment of Tootsie’s scores:

Tootsie was classified as a “Stargazer,” whose “unique genius lies in the mix of strategies that she uses to approach daily life… She certainly has a wild, wolf-like side that is especially useful in the environment of the rugged individual.” Labeling Tootsie, the 7-years-in-a-puppy-mill Cavalier King Charles Spaniel who wants nothing more than to eat (anything) and lie in one’s lap, as “wolf-like,” leaves me close to speechless. Her “empathy” scores were “off the charts,” even though it was Willie who yawned after I did and not Tootsie, (yawning after seeing another yawn being indicative of empathy). Tootsie’s results also indicated that she is “highly collaborative;” I’m guessing that is because she did indeed focus on the food I pointed to in some of the tests. But categorizing her as such is a stretch, I’d argue. Tootsie is pretty much all about food, while Willie is often called “Trisha’s mood ring.”

My biggest concern about the data used in the study is that there is no “inter-observer reliability”, which is critical to good research. When I did my dissertation, one study required the observers to record the number of paws steps within a set time period. If they were off by more than 1% I had them practice until they were accurate within one paw step (out of almost a thousand). But there’s no way to know how people playing the Dognition game recorded certain behaviors. I myself found it confusing to know how to record what Tootsie had done. (Example–Tootsie walking over to a cup with a treat underneath, but ignoring the cup completely, and then sniffing the other one was to be scored as “successfully retrieved the food”.

But let’s say that all the observers recorded their dog’s responses consistently, and that the data are solid. I would argue that, if true, there are other reasons beside brain size that would explain larger dogs having more self control than smaller ones. Larger dogs–think breeds like Labradors, Border Collies, Standard Poodles for example, have been selected for working with humans on tasks. All of these tasks require a certain amount of self control: Labs can’t dash after a duck until released by their owner, Border Collies have to control their desire to move sheep until asked by their handlers. Even if larger dogs didn’t tend to be working dogs, just their size alone requires us to manage their behavior in ways we don’t manage small dogs. How many people object to a 10 pound dog “jumping up” on them when “up” is only a few inches from your ankle? For example, I could teach Tootsie to stay in a few days, but I never have, because, well, I have just never needed to. Her life as a lap dog, puppy mill rescue is a totally different one than that of the Border Collies. Does she exhibit less self control than they do? Yes, but there are a lot of reasons for that beyond brain size.

This issue could have been discussed in the full article (which is not available on line without a subscription to the journal). But I would guess that if this explanation was considered, the article wouldn’t be as focused on evolutionary differences in cognitive ability based on brain size. And to be clear, I’m not arguing that the hypothesis is incorrect, just that we would need a lot more research to test it. I’ll see if I can dig into this more if you are interested.

I’d love to hear your thoughts on this. Obviously our experience is not carefully controlled research, but still interesting. . .

MEANWHILE, back on the farm: Perhaps it is because I’ve taken so many photographs, but for whatever reason I find myself increasingly attracted to photos that are unique in some way. For example, take this photo of Maggie playing with her rubber stick. Her face is blurry, but the movement within the frame kept me going back to it over and over, rather than trashing it as a failed photo. 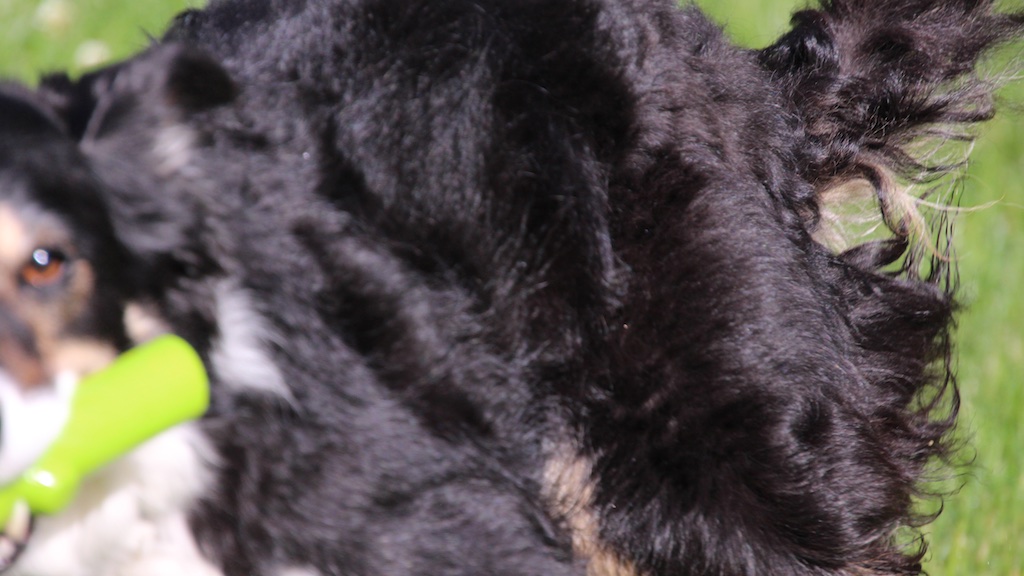 Here’s a more traditional shot, fun in its own way too. 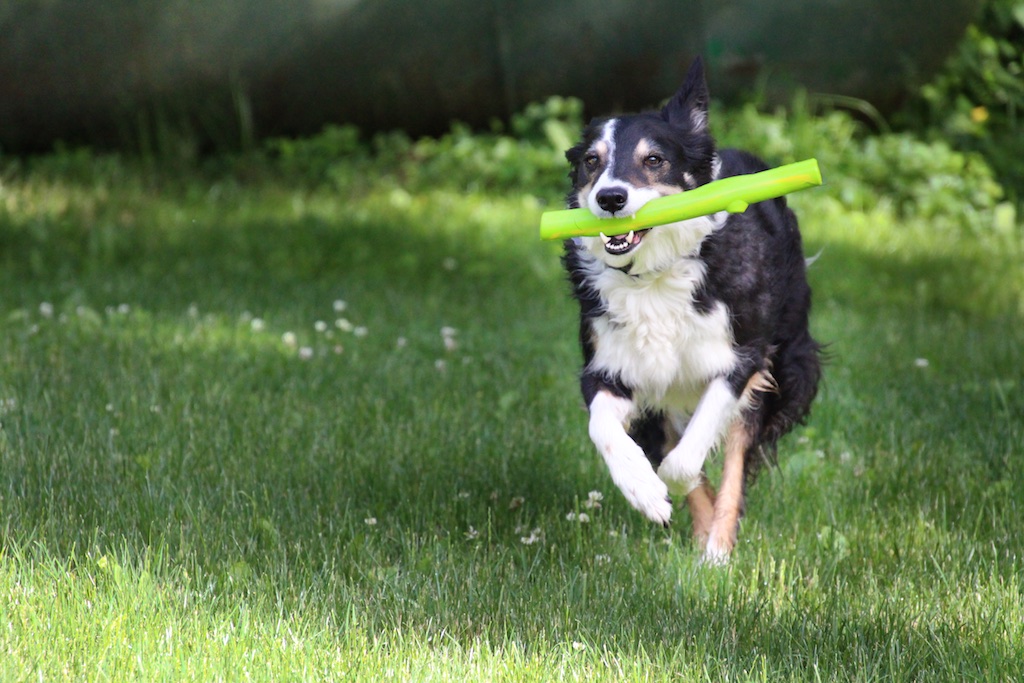 Vertical photos can be problematic on computers and phones, which is why I usually stay with a horizontal frame. But these flowers just begged to have a vertical taken of them. 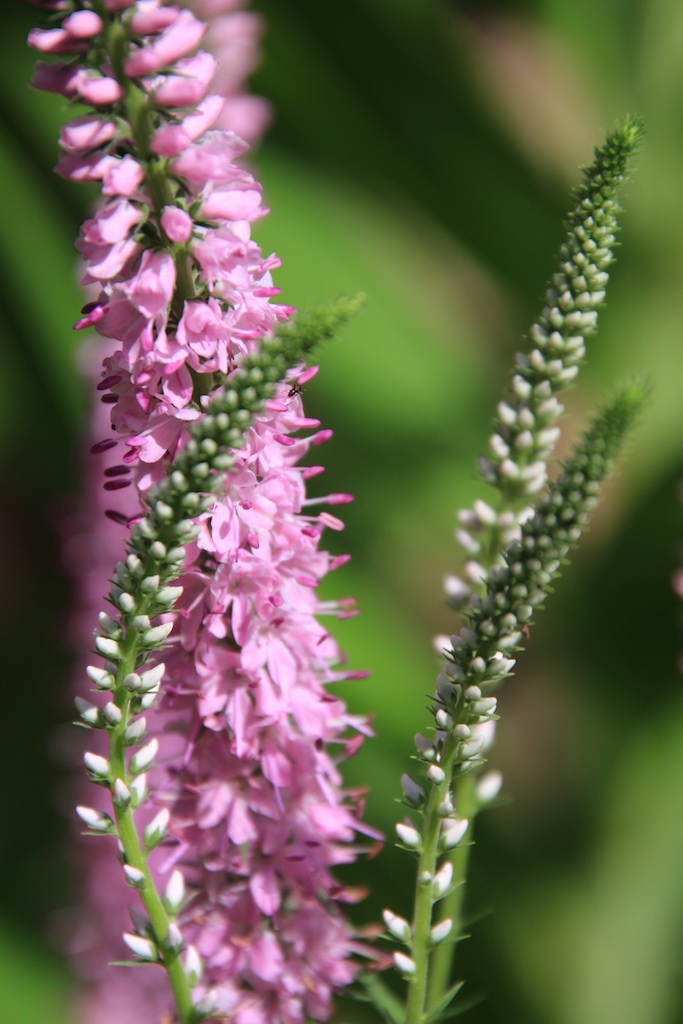 Let us know if you too are doing looking outside of the box, it’s always inspiring.

« June Photo Album
It’s All About the Outline: Dogs, Statues, and Dangerous Hats »