Welcome to an ongoing inquiry about the behavior of people and dogs.
Blog Home >> Animals and the People Who Love Them >> Birds of New Zealand

I can’t resist writing a post about the birds of New Zealand. No surprise to readers, I was fascinated by the animals of NZ, many of which have been brought in for a variety of reasons. As many of you know, NZ has no native mammals except two species of bats, and has suffered greatly from the importation of many species, including the Australian possum, stoats (Mustela erminea, think weasel or ermine) pigs, deer, and many species of birds. Rats, cats and a host of other critters have hitch-hiked their way in and caused their own set of problems. By the way, the possum in NZ is nothing like the marsupial creature in North America. The possum in question, which is endangered in its own native land, is, uh… I’m sorry, I can’t help it … adorably cute. It is also eating its way through the forest of NZ, and is a terrible and destructive pest on native vegetation and animal life. One ran down the lane in front of our car one evening and we all resisted melting into an oxytocin haze as we recalled all the damage they do. Stoats too have wreaked havoc on native wildlife, especially ground nesting birds. Stoats were brought in to control rabbits, who were also brought in (will we ever learn?), and their importation (stoats) is considered one of the worst ecological mistakes made in NZ. What’s especially galling to me is that biologists warned against it, predicting disaster even in the late 1800’s, and they were completely ignored. Now the country is spending huge amounts of money (good for them) trying to control them and save several species of ground nesting birds, including the Kiwi.

Here’s a native bird though, the Australian Gannet. After the seminar we got to visit a nesting colony of Gannets on Muriwai Beach, and it was heaven for me. Gannets are the fighter jets of the avian world, gorgeous flyers who spend most of their time on the wing over the ocean. When they spot food, they tuck their wings and dive like bullets. They only come to shore to breed, and the observation colony at this location allows you to watch their greeting ceremonies (necks twisting like DNA strands) when one member of the pair comes back to relieve the other on the nest. I could have stayed there for hours. 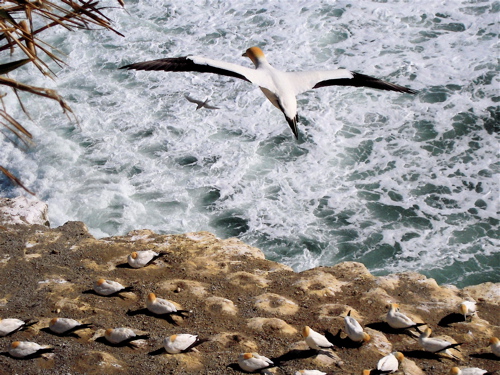 Here’s the Pukeko, pronounced “Poo Keh Ko,” another native bird of damp pastures and wetlands. It’s the size of a small duck, related to Gallinules (also known as a Purple Gallinule), and is best described by a friend of mine as a “Dr. Suess” bird. A traveling companion and I both think this particular bird had a youngster hiding in the grasses. We watched this one and its mate scold and display to us, but never leave the area, and Jim and I had seen a pair with a young one walking in the same area not long before.  Most importantly, showing you this picture gives me an opportunity to say PUKEKO over and over again. For reasons I can not begin to explain, saying PUKEKO gives me an inordinate measure of pleasure. PUKEKO. 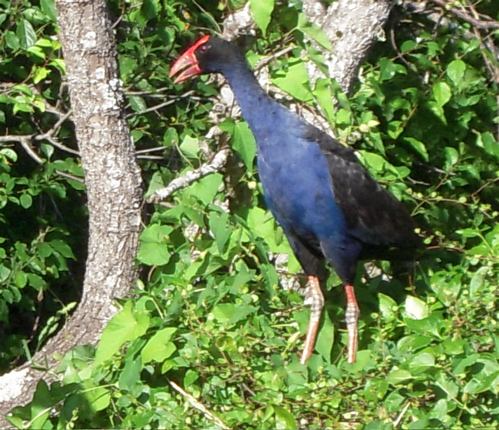 Here’s the most famous bird of New Zealand, the Kea parrot. Keas are parrots found in the mountains of NZ, are highly social and scary smart. We were warned on the Milford hike to lock our doors in the lodge where Keas are common, and to resist being charmed by a Kea dancing in front of us like a tap dancer. Apparently while one transfixes you with its antics, the others sneak through the door behind you and rifle your backpacks. They also rip windshield wipers off of cars, tear open anything they can get their beak on, and one even broke into a tourist’s backpack and flew away with his passport. One of our guides told us there had been some interesting research on Kea cognition and cooperative problem solving, but I haven’t had a chance to find it yet. If anyone knows of any articles let us know in the comment section. If not, we’ll look it up at the office. 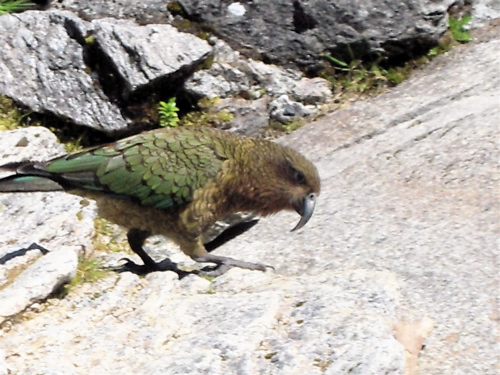 MEANWHILE, back on the farm: It was 15 F below zero (about 26 below Centegrade) when we got up Tuesday morning, after a 40 hour trip home. Exactly why I choose to live in a place in which it is 15 degrees warmer in the freezer compartment of one’s refrigerator is unclear to me at the moment. But the lambs are thriving, Willie is a happy boy, while Sushi is not pleased in the least. She asks to go out, stays out 60 seconds, cries to come in, and then asks again 30 minutes later. Apparently she is an optimist at heart. It’s warmer today, got up to 18 F!  Wheee!

Here’s a great photo of Willie taken by my amazing, perfect house sitters: 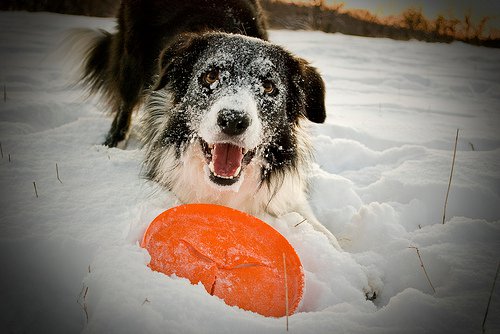