Welcome to an ongoing inquiry about the behavior of people and dogs.
Blog Home >> Animals and the People Who Love Them >> Book Review: Let Dogs Be Dogs 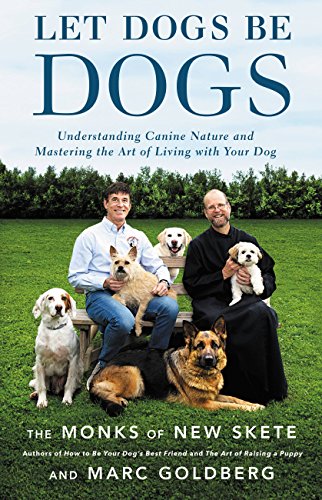 Let Dogs Be Dogs: Understanding Canine Nature and Mastering the Art of Living with Your Dog by The Monks of New Skete and Marc Goldberg.

The primary premise of the books is that dogs can’t be happy without a pack leader, and that had better be you. It thus seems appropriate to begin this review with a definition.

LEADER:  1. One that leads or guides. 2. One who is in charge or command of others. 3a. One who heads a political party. 3b. One who has influence or power. 4a. A conductor. 4b. The principal performer in an orchestral section. 5. The foremost animal, such as horse or dog… 12. The growing apex or main shoot of a shrub or tree. 13. An economic indicator. Abridged from The American Heritage Dictionary of the English Language, 4th edition.

As is clear, the word leader has many meanings. Many of them are positive, such as someone who leads you out of danger, or the leader of the girl scout troop. When I grew up, leaders were people you looked up to, and perhaps aspired to be yourself someday. However, the word leader has become a symbol of so much more in the training world, and not necessarily in a good way. It might be, in fact, the perfect symbol of a perspective seemingly 180 degrees away from positive reinforcement-based dog training. Think Cesar Milan versus Dr. Susan Friedman.

The new book from the “Monks of New Skete” (I put it in quotes because the book was written by one monk, Brother Christopher and a dog trainer, Marc Goldberg) jump into this controversy with no apologies for their belief in the importance of pack theory in dog training. They begin with a dystopian description of our current relationships with dogs:

“The leisure time today’s dog owners have is often devoted to events and activities deemed more important than creating a healthy relationship with their pets… Too many of today’s basic obedience class are dumbed down and truncated, more concerned about being politically correct than with offering dog owners effective solutions.”

Oh my. Our poor dogs. They go on to say that guide dogs for the blind are happier than most pet dogs, because their owners do not “randomly pet their dogs and shower them with affection.” (No actual study is mentioned.) The book’s primary message is the importance of being a pack leader, because dogs are pack animals who need strong leaders. “Put very simply, by being a strong pack leader you will strengthen your dog’s pack drive, which in turn will lead to good behavior and a happy relationship… Even quieting a territorial bark on command asks the dog to switch into pack drive.”

What strikes me most about this book is how out of date it feels. I don’t see the term “drive’ used very much anymore, because when it’s used to describe motivation it is intuitively obvious: “The rat has a strong drive to find food because it is very hungry.” I presume the authors use “pack drive” to mean a motivation to be part of a group with a clear leader, because they talk about being your dog’s leader on almost every page. The authors briefly mention that there are several theories about the evolution of dogs, but never mention the research that shows social behavior is in large part driven by resource distribution in feral dogs as much as anything else (as is true in many species). Neither have I found a discussion about the vast scientific body on learning and training, nor any of the research that shows that physical corrections can be harmful to our relationship.

According to Brother Christopher and Goldberg, one achieves leadership in part by using leash pops, which are meticulously defined: “A quick in and out motion with the left hand on the leash that is reminiscent of the way one snaps a towel at someone at the local pool. Its purpose is less punitive than attention-getting.” No mention is made of the fact that many classes teach attention as an exercise. Along with a “strong verbal no,” leash pops are advised for a dog who failed to sit on command, while an abrupt about-turn, “redirects the dog’s focus on you as you walk in the other direction.” Well, yes it does. It focuses on you because if she doesn’t, she’s going to get hurt.

On the other hand, there are glimmers of progress. They advise owners to teach dogs “Leave It” by trading them with something better. Whew. But here are the two things that disappoint me the most:

Every step forward in progressive dog training seems to be followed by one or two steps back, and this book boldly marches backward. Dog owners who know nothing of progressive dog training and the science behind learning are going to snap this up like dogs on a doughnut. I’ll bet that that this book is going to be all over bookstores. It’s already #1 on Amazon in Dog Training. The Monks first book, How to Be Your Dog’s Best Friend, published in 1978, is STILL the book I often see turned cover-side up at bookstores, which is astounding given how long ago it was written.

Confession: When I first started reading about dogs I loved How to be Your Dog’s Best Friend. Just about everyone did, because it felt like a balm of benevolence compared to what else was out there. (For example, Kohler–“fill a hole full of water and hold your dog’s head in it to stop him from digging”.) I even titled my no-longer published booklet with a reference to leadership: “How to Be Leader of the Pack and Have Your Dog Love You For It.” It was written, ironically, to counter the harsh methods of people like Kohler, but I took it off the market because the whole “leader of the pack” concept was outdated and regularly misused. The Monk’s first book came out 39 years ago and at the time it felt revolutionary But that was then, this is now. Compared to the resources now available to dog owners, this book doesn’t feel benevolent, it just feels sad.

But there’s another disappointment here. This kind of thinking pollutes the concept of leadership, in its best iteration. Dogs do need to know that we have their backs, that they can count on us when they need protection. Dogs do look to us–to protect them, to feed and water them and to provide nurturing and social acceptance. One can indeed argue that dogs are attracted to people that some would call “natural leaders” in the best sense of the word. However, (and I want to say this in capital letters, but would rather not yell), this has nothing to do with leash pops or “strong verbal no’s”. It has everything to do with being around someone who is comfortable in his or her own skin. Don’t you know someone who dogs love to be around? I’ve found that those people are not people who fuss over dogs, but who have a presence about them that everyone can sense.

Everyone wants to be around people with this kind of presence, people and dogs alike.  They come into a room and everyone looks at them. People want to stand beside them. I’ve known a few of them, some dog trainers, some not. What sets them apart is their sense of comfort in being who they are, that in some unquantifiable way, they are rock solid. Like the earth.

The military veterans I’ve talked to told me that this is the kind of person who they see as a natural leader, and who they would follow into hell and back for. Perhaps this is what “The Monks” also see, and are trying to teach people how to find. However, I would argue that they suggest you try to get it in all the wrong ways– using physical force and by taking away your dog’s autonomy. We are advised to put our dogs on leashes throughout the day so that they get up when we get up, and are forced to go where we go. The monastery dogs are expected to be on a Down Stay during dinner and while their owners are working. If we treat our dogs this way, they guarantee they will be calmer and more obedient.

Well, yes, there is some truth to that. Maggie was spayed two weeks ago, and for a week afterward she was on a leash, a Down Stay or in her crate. Rather than being buzzed up from lack of exercise, she became very quiet. No doubt many people would remark how calm and well behaved she appeared. I’d argue she was resigned, if not unhappy. As she gradually got more autonomy last week, she became more animated, with a sparkle in her eyes and an open, relaxed face. Guess which dog I’d rather have.

I have no doubt that the authors of this book love their dogs, but this is a road I hope few decide to follow. Join me in helping to counter such old fashioned ideas by recommending all the great books, videos and website-based programs that teach progressive training perspectives. If you need direction, you could go to the Learning Center’s book reviews, or go to Dogwise for the dozens if not hundreds of books that employ truly benevolent and effective training methods that are not based on control, hierarchy and physical punishment. Or take Dr. Susan Friedman’s class, or watch videos from Dr. Sophia Yin or check out the Fenzi Dog Sports Academy or read The Classics or, or, or… The options are endless. Just take the road that should be most traveled, our dogs will thank us for it.

MEANWHILE, back on the farm: Hot, hot, hot. And dry, dry, dry. It’s been a quiet time for the dogs, given Maggie’s need to recover from surgery and the hot, dry weather. Here’s a creature in the photo below who knows how to take care of himself. This tiny tree frog is always close to the outdoor faucet I use to water the plants. Clearly he’s found a moist, cool place to hang out. There are three places now in the garden where I routinely see tree frogs. I expect they each have they mini-territory and stay in one place most of the time. We are becoming buddies. Well, at least I adore them. No word about their feelings toward me yet. 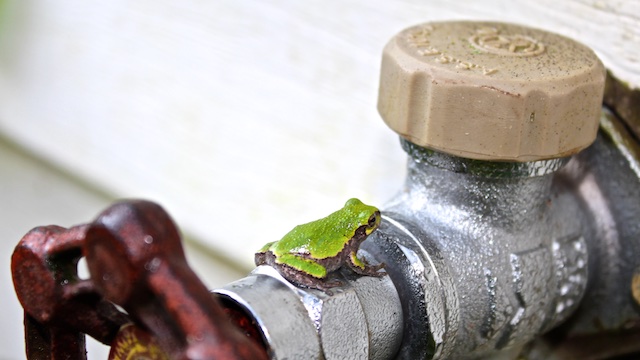 Lots of the plants and flowers in the garden look just awful at the moment. I’ll spare you the photographs of them. (Although, someday I should just post photographs of the myriad plant diseases that my garden attracts; I have a veritable petri dish of molds, rusts, and heaven knows what else.). But zinnias love this time of year; Yay annuals! 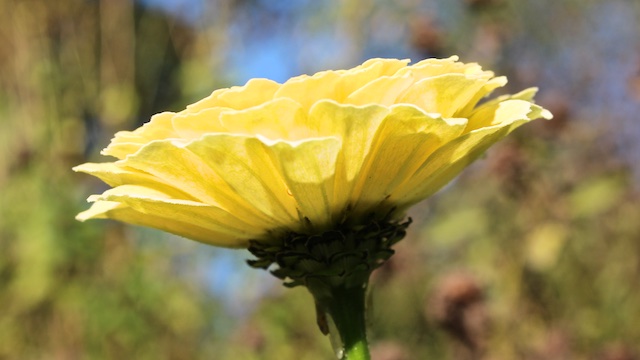 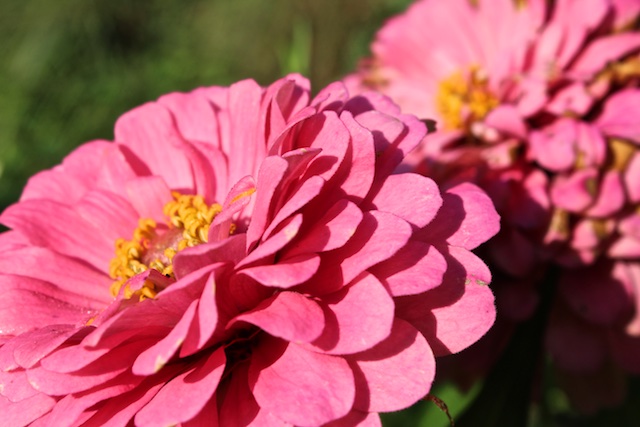 « Fun with Food at the Farm
In Case of Flood: Comments re My Book Review »