Welcome to an ongoing inquiry about the behavior of people and dogs.
Blog Home >> Animals and the People Who Love Them >> Book Reviews: The Dog & The First Domestication

These books as are different as a Bulldog and a Whippet. I recommend them both, but note I have some caveats for each. 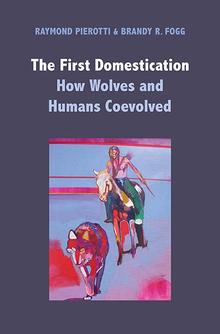 The First Domestication: How Wolves and Humans Coevolved is by Raymond Pierotti and Brandy R. Fogg. I love its perspective–it’s the first book I know of that incorporates indigenous perspectives on the origin of the domestic dog and the relationship between people and wolves.

(FYI, for a short time I lived outside of Leupp, Arizona, on a Navajo Indian Reservation. My first husband, Doug McConnell, was accepted into the Teacher Corps right before we were married. We both learned a great deal about the Navajo culture, and I’ve been attuned to the differences between European and Native American perspectives ever since. Yá’át’ééh!)

The authors argue that European perspectives, because of their focus on competition and aggression, have ignored the basic biology of wolves as well as indigenous accounts of cooperative relationships between wolves and humans. Specifically, they make the case that lone wolves–those pushed out of their packs–initiated our relationship by seeking companionship with other social mammals, including groups of humans.

Thus, wolves got this whole miraculous thing going, and not just because they were bold enough to begin to forage in the garbage dumps of early human settlements (a la Coppinger). Rather, it was social attraction that drove the system, not a desire for food.

This leads to my quibble: The authors are quick to disparage the hypothesis of others, including Hare and Coppinger in a way that sounds, ironically, a bit competitive, if not a tad aggressive. For example, starting on page 28, they harshly disparage Coppinger’s account of being “attacked by a wolf” at Wolf Park, and go on to make their own argument against the Coppinger’s hypothesis about the origin of the domestic dog.

However, the arguments in The First Domestication have a lot of logic behind them, and overall I am finding the book fascinating. I’m not done with the book yet, but confess that I skipped to the end to read their account of Romeo, the wolf who lived on the outskirts of Juneau, in part because I reviewed A Wolf Called Romeo in July of 2014 and knew a little something about the story.  They use Romeo as an example of single wolves looking for social relationships–Romeo loved to play with the local dogs–although still quite capable of hunting for their own food.

In summary, this is a fascinating book for those a bit nerdy about evolution, the natural history of dogs and wolves, and the too rarely expressed perspectives of indigenous peoples. It’s not beach reading–it’s information dense with few photographs, but I’d argue, in spite of my quibbles, that it is an important addition to the field. 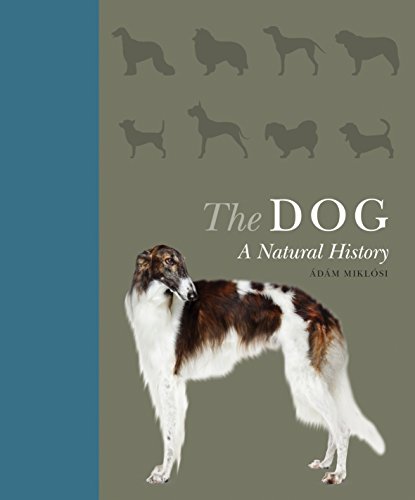 The Dog: A Natural History by Adam Miklosi is a very different book, albeit not quite the book I was expecting. Given Mikosi’s credentials, extensive body of research and the subtitle “Natural History,” I didn’t imagine a book with as many photos as text, and an easy, breezy discussion of complicated topics like, you guessed it, the evolution of the domestic dog.

On the other hand, and on the plus side, there is a ton of information packed into the book. For example, pages 54-55 shows a comparison of human/dog color ranges and visual acuity, a dog’s field of vision, and how head shape affects vision in different breeds. Granted, it doesn’t go into much detail on any topic, but it does do a good job of illustrating a great deal of information about dogs in an interesting and accessible way. (Who knew, for example, that the world record for the longest dog tongue (17 inches) is held by a boxer? Or that dogs can discriminate differences in size until the ratio becomes as low as 3:4?

Some of this information compression is problematic. The authors note that “mixed-breed dogs were more likely to be more disobedient, more nervous, more excitable and more fearful”. (With no reference as to the source of that information. That just hurts my heart.) However, on the same page they say that mixed breeds received less training and were more likely to be kept outdoors. Surely a note about how these two factors might be related is in order? So, one needs to get this book knowing what it is, and what it isn’t. Not a lot of depth, but lots of range, with stunning photographs and illustrations.

In summary, both of these books would be great additions to one’s library, as long as your expectations are in order. The First Domestication will appeal to those who love delving into the depths of zoology and anthropology, The Dog: A Natural History is a great book for young adults, or a dog-related waiting room, or you cozied up with a cup of hot chocolate, as long as you keep a sharp eye out for over simplifications.

MEANWHILE, back on the farm: It’s been a lot more fun to take walks lately with the warmer weather, but it’s foggy and a tad weird at this time of year. I can’t believe how much snow has melted. 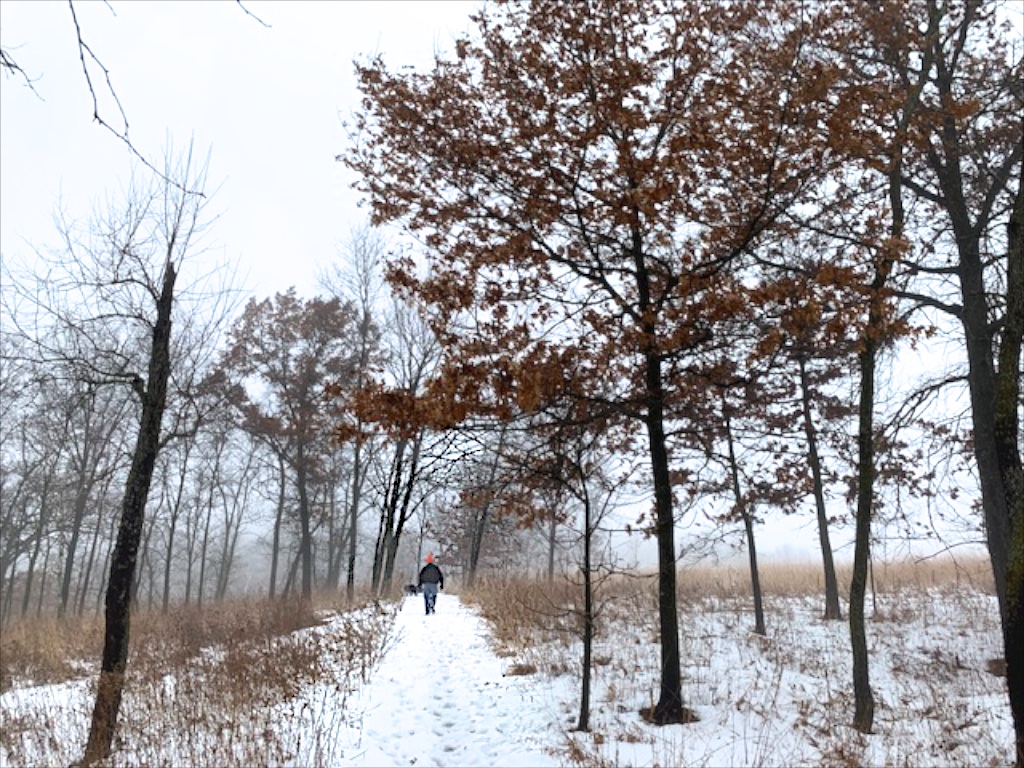 Willie and Maggie are soooooo glad to be out and about again. However, we’re not working sheep because it is so slippery and gooey, so Maggie would tell you that her life is barely worth living if you could ask her. But somehow she’s coping, due to long walks, tug games with Willie, endless belly rubs on the couch and fresh beef, venison and sardines for dinner. Poor, poor Maggie. 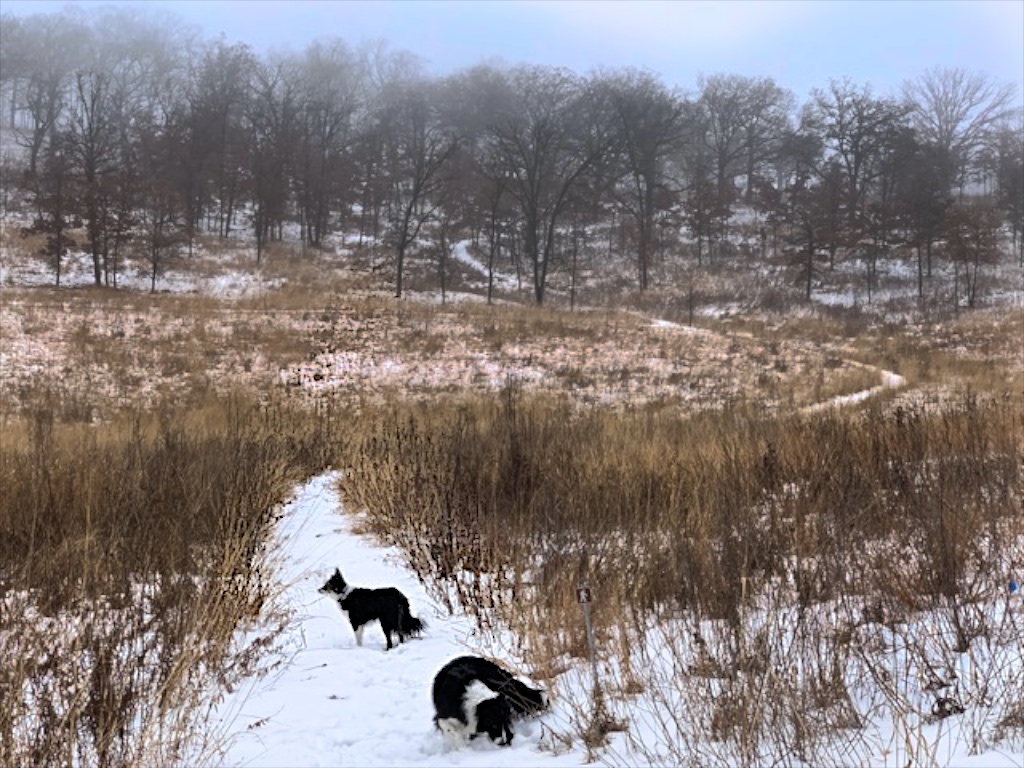