Welcome to an ongoing inquiry about the behavior of people and dogs.
Blog Home >> Animals >> Booklet For Dogs from Shelters or Rescues

Karen London and I are planning on writing a booklet for people who adopt dogs from shelters or rescue groups. We’re both aware that often it can be intimidating to sit in your living room with a new family member, whose background you may not even know. Over the many years that we’ve worked with people who have adopted dogs, and with our own dogs that we have taken in from difficult circumstances (5 between us), we know that these dogs can present challenges, and generate questions that are not often answered by standard training books.

We have our own ideas about what to include in the booklet, we’ve already written an outline, but we’d love to hear from you too. If you have a dog that you obtained from a shelter or rescue group, or adopted an adult dog who might have had a difficult past, what did you want to know when you brought the dog home? What do you think are the most important things for adopters to know? Keep in mind that we are envisioning a relatively concise booklet, not a full-length book. Pat Miller has written a good full-length book on the topic, Do Over Dogs, and it’s a great resource. We’d like to create an affordable booklet for rescues and shelters to hand out to adopters that hits the highlights and emphasizes what is most important. We both know already that the challenge is going to be keeping it short, but we’d still love to hear what you think should be included. The readers of this blog have a vast amount of knowledge, and what a great thing it would be to share it . . .

MEANWHILE, back on the farm: Willie and I just got back from a long walk, working our way up to the Milford Trek in New Zealand. I still can’t imagine walking 13 miles with a full pack yet, but I’m getting a tad closer anyway. We walked for about an hour, as fast as I could, with a pack about half full. That was fine, but then when I came home we trucked up the steep hill behind the house and I was, uh, tuckered. Willie worked the sheep, which involved some good, fast runs, brought the sheep down to the grass in the front yard and worked with me to keep them there, safely out of the road, and then came inside, picked up his current favorite toy and begged to play fetch. Maybe he should go to NZ and do the hiking?

Here’s one of my favorite and easiest fall recipes; I got it from some dear friends who love good food as much as I do: Cut Roma tomatoes in half, drizzle with Olive Oil and sprinkle with Basil, put in oven on 300 til soft and condensed. They should shrink to at least half their original size. It can take up to 2 hours. Use right away or freeze, they last all winter in the freezer.  I use them in pasta, (Linguini with homemade Pesto–made that too last weekend–with braised greens & melted tomatoes, yummmmm) or as a side dish, etc etc. They are like concentrated tomato-ness; I think of them as Tomato Haiku. (The green on the side is basil I added after cooking just to make the photo pretty.) 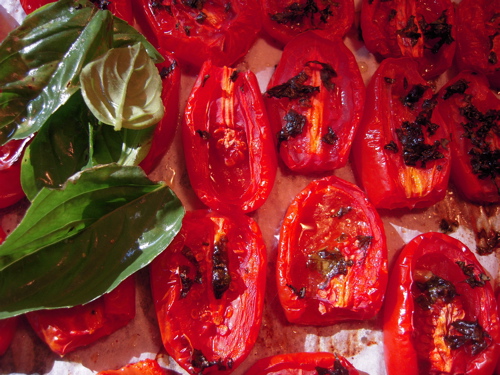 And here’s one of my favorite prairie grasses, Little Bluestem, shining in the sun in the park where Willie and I walked. 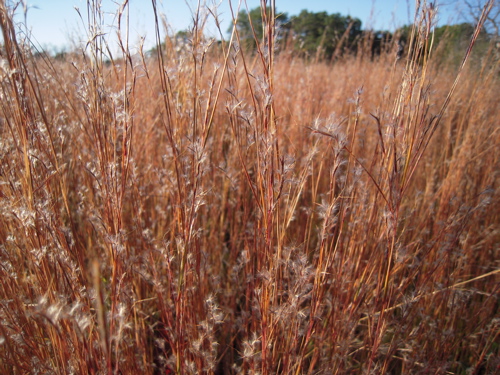