Welcome to an ongoing inquiry about the behavior of people and dogs.
Blog Home >> Cats >> Books, Books, Books

Well, I had wanted to write about a book one of you asked about: The Wolf in the Parlor, but life seems to have its own schedule and I have only just started it. It is one of the gazillion books I am sent by publishers to review and I have to admit I have a hard time keeping up. (But I’d miss them if they didn’t come! It’s one of those high quality problems.) The book is by Pulitzer prize winning science writer Jon Franklin and has received rave reviews from the kind of places that authors dream of (Publisher’s Weekly, Booklist etc.)

As I said, I’ve just started it, but I can tell you that the book’s main thesis is that people and dogs, around 12,000 years ago, linked their evolutionary paths together and evolved socially and physically to take on supportive roles. He argues, according to the reviews, that humans lost some of our brain power because dogs took over those functions, and dogs lost some of theirs because we became their protectors and nurturers. It sounds interesting, although admittedly, a bit far-fetched to me (what of all those cultures in which dogs are considered pests?  what about all the others things that happened around 12,000 years ago, like the domestication of plants?), but I will finish it this weekend with interest. I’m all in favor of speculation; even if it turns out to be dead wrong, it causes us to do a lot of thinking.

I have to admit, with apologies to the author, that I was originally put off when he begins by explaining that most of his life he thought dogs were of little interest. Along with his hypothesis of why dogs and humans are so closely linked together, the book includes his personal journal from the land of dog-neutral to the world of dog lover.  Although I suspect I will appreciate his journey, it struck me a bit at first as yet another “I didn’t understand and now I do and so you should too” books that plop themselves in book store windows on a daily basis. How many thousands of books are written by people who start out depressed or totally disorganized or not caring about animals, and then have an epiphany and want to tell us all about it and how now they get it and we should too.

Oh dear, I sound so cynical. My apologies. Perhaps I’m just a tad tuckered, having gotten home late at night after speaking at the Humane Animal Welfare Society in Waukesha WI about cat behavior. Don’t get me wrong, I had a ball, it is SO fun to talk about cats and their behavior with other cat lovers, but it’s a long drive and I didn’t get home til after 11 pm. This from the girl who likes to be in bed by 9:30!)

On the up side, even in the early pages, Jon writes beautifully about how a standard poodle named Charlie wormed his way into his heart and mind, and integrates the personal part of his world with his life as a science writer. He mentions that science writers are, in a way, like old time naturalists, in that they know a little bit about all aspects of science: a rare occurrence now in the age of specialization. It will be interesting to see how his personal relationship with a dog and his intellectual knowledge as a science writer blend together into speculation about the origins of our relationship and our eventual evolution.

The other book that’s getting a lot of media attention right now is Alexandra Horowitz’s book, Inside of a Dog. That’s sitting on my desk, and it would be wagging it’s tail for attention if it could. I’ll pick that one up next!

What about you? Have you read either of these? What books have you picked up recently that you found especially interesting?  Send them in, and then I can have an even bigger pile of books to read beside the couch!

Meanwhile, back at the farm: All is well, at least it will be if I ever get out of the office and outside. There are weeds that need pulling, windows that need washing, sheep that need worming, vegetables that need cooking, apples that need collecting, and most importantly, dogs that need a lot more attention than they’ve gotten this week. I have one more thing I HAVE to do today (ignoring the endless lists of SHOULDS) and then I’m out of here. Oh boy, Willie and Lassie, here I come!

And here’s a little fall color, I’ll be wallowing in it soon! 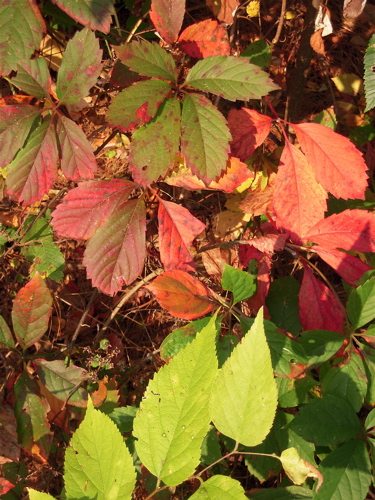 « “A Fully Functional Tooth?”
The Wolf in the Parlor »