Welcome to an ongoing inquiry about the behavior of people and dogs.
Blog Home >> Animals >> Brain Dead over Holidays, Great Book

Jim, Will, Lassie and I are having a heavenly break over the holidays. Lots of time off, lots of movies, lots of snow shoeing and, for Jim, endless shoveling. For the first time ever I am contemplating getting a snow blower. Boooo.. another machine, another something that breaks down and won’t respond to positive reinforcment. Yeah…. less back breaking work for Jim, and less time for me looking out the window worrying about him. I do some myself, but my back is pathetically problematic so I don’t do much. (Car accidents, 15 foot falls off of hay wagons, fainting in the hot sun and breaking your tail bone turn out to be things that are bad for your back. Who knew?)

I am reading a book sent by one of my sisters (Wendy Barker, a brilliant poet and creative writing professor, if I do say so myself, completely objectively of course) and it is tremendously thought provoking. Don’t Sleep, There Are Snakes is a story about the author, Daniel Everett, and his life with a hunter-gatherer tribe in the Amazon. More importantly, the book uses Daniel’s discoveries to question our understanding of the nature and nurture of language. The tribe, known as the Piraha, have no language to describe numbers… never do they say one, two, three, for example. They also live and describe all events as being in the present (I am oversimplifying here). I’ll write more about this in the next blog, but what makes this book important, (and relevant to animal lovers) is that the tribe do not use what have previously been thought of as “universal” aspects of human language and cognition. Daniel’s 30 years of work with the tribe suggest that culture plays a far greater role in language than previously thought (a la Noam Chomsky for example.) This is especially interesting if you are interested in comparative cognition… what goes on in the minds of other animals compared to what goes on in ours. I’m not done with the book yet, more to come, but I do recommend it highly.

Meanwhile, here’s a little of Wisconsin winter. The little round dots are dried apples that haven’t yet fallen off the tree. A White Tail Deer comes every day to paw the snow, in hopes one has fallen, which I presume they do throughout the winter. (She also is enjoying munching on a pumpkin I left out on the porch, which then froze to the porch and was immobile until the brief thaw we had this weekend.) 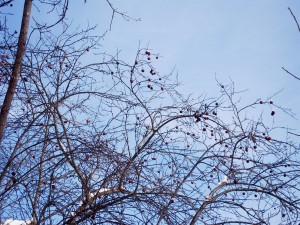 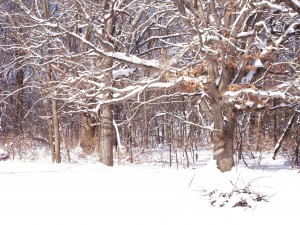