Welcome to an ongoing inquiry about the behavior of people and dogs.
Blog Home >> Redstart Farm >> “Responsible Breeding” an Oxymoron?

I’m working on a column for Bark magazine, in which I’m going to talk about one way to decrease the number of dogs needing adoption from shelters and rescues. Right now the two primary efforts to decrease the number of dogs killed in shelters are 1) encourage spay/neuter & discourage breeding and 2) encourage adoptions of dogs from shelters and rescue groups. I say Here! Here! in general to both of those, and it is heartening how successful both of those efforts have been.

However, there is one important aspect of this issue that is missing, and that is encouraging responsible breeding. Ah, some would say, responsible breeding?! Isn’t that an oxymoron? Breeding is a dirty word in some circles. After all, aren’t there too many dogs out there already? How could anyone justify breeding a litter when so many dogs in shelters and rescues need homes? But if you look at the data, the picture becomes a tad less black and white. Based on the extensive research of Gary Patronek & Andrew Rowan, there are about 7.3 million dogs acquired by households in the U.S. each year and about 6.2 million puppies produced every year by breeders, amateurs and puppy mills. Hmmmm…. Interesting math here, yes? So where do those 1.8 to 2.1 million dogs killed in shelters every year come from?  They estimate that about 4 + million dogs enter shelters every year, 400,000 from amateur breeders who don’t find a home for the litter, 2,2 million strays (.6 million are reclaimed) and 1.8 million owner surrenders.

There is little controversy about the fact that most dogs end up in shelters because of what owners describe as “behavioral problems.” Many of these problems could be easily handled if owners in the first place acquired the right dog for their households, and had someone to act as a coach as their dog matured. And that is why, I would argue, we need a third leg of prevention efforts to keep dogs from dying in shelters, which is based on keeping dogs out of shelters in the first place. And that’s where responsible breeders come in. I don’t think we have a good communal idea of what responsible breeding means, and I think we need one as a country.

Many members of the general public have no idea what a responsible breeder would look like. I can’t tell you how many clients I’ve had who said things like: “Oh, I can’t tell you about the behavior of the father, because we couldn’t get anywhere near him.” (Oh my, this is a dog who was bred?) I’ve had clients who competed in Conformation who wanted me to help get them a title on a dog who was insecure, shy, or behaviorally unstable ever since youth. They wanted the title so that they could breed the dog.

If I was queen, we would have a universal understanding of what a responsible breeder is, and reinforce them for their good work. As someone who bred BCs years ago (Lassie had 2 litters), I can tell you that doing it right is very, very hard work. If you carefully select a mating based on genetics, physical and behavioral health, care for the dam and the litter as they should be cared for, provide an enriched environment for the maturing pups, sell only to the best of homes and act as a resource (and possible home) for the rest of the dog’s life… well, that’s a huge commitment. And yet, when doing all that years ago, I’ve had people treat me as if I was a social pariah.  Breeders, even the really good ones, tend to be castigated in this country, and yet, shouldn’t we be reinforcing responsible ones?  A truly responsible breeder maintains responsibility for every pup he or she raises, which means that the number of dogs going into rescues or shelters would drop so significantly that they would have to redefine their job. (And wouldn’t that be great!)

I’d love to hear what you think about all this. It’s true that I’m not completely objective, having bred litters from 4 females in the past, and am considering getting another BC from a breeder sometime in the future. (Criteria = “bomb proof” thank you very much. One Willie is enough!) But it saddens me that truly responsible breeders are so often castigated (while the irresponsible ones don’t care), and that so many dogs enter shelters and rescues because no one was there to help the owners solve what are often minor behavioral problems, or direct them to the right dog in the first place.

Meanwhile, back on the farm: Babies everywhere, there’s just no getting around it. My bottle babies from Truffles are getting more milk from her (yeah!), but not enough for triplets, so Jim and I visited Ann Topham of Fantome Farm fame (her goat milk is internationally known, and for good reason) and picked up 5 gallons of goat milk. It took 2 refrigerators to hold it, but it should last the babies a good long time. When I was at Ann’s earlier, I stumbled on her own birthing drama.  Here’s a doe who was 2 days late and was clearly in labor. When they start looking at their own bellies, you know something is up! 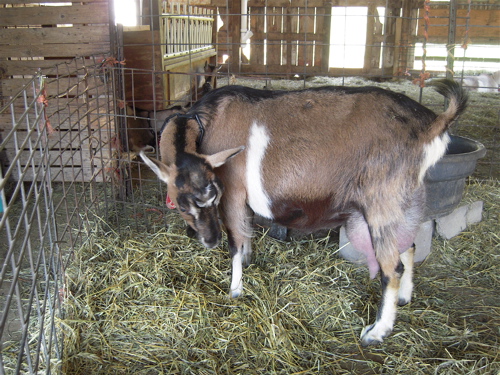 Ann called our mutual vet, the good Dr. Jeff Kunart, who came out and helped the doe deliver two HUGE twins while I was there. Here you can see the two front hooves just starting out. The nose was right behind, and once the shoulders were through, the kid flowed out like water. 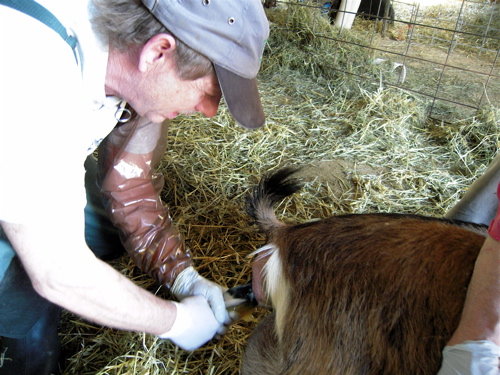 Here he is, just seconds after being born. 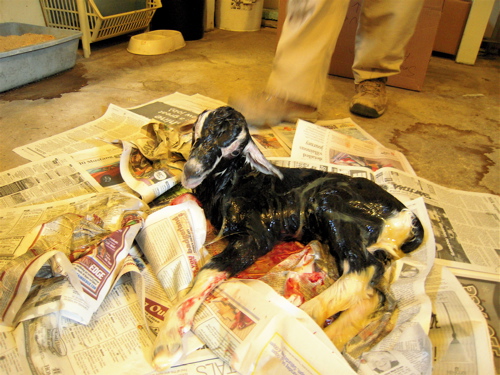 « Leadership and Frolicking Lambs
Could Breeders and Shelters Work Together? »