Welcome to an ongoing inquiry about the behavior of people and dogs.
Blog Home >> Animals >> Can Dogs Tell Stories: The Answer

Recently I asked the question, “Can Dogs Tell Stories?” I didn’t mean stories in the sense of fictions we tell children to help them go to sleep at night, or novels about sexy spies, but stories as internal narratives that describe the “who, what and where” of an event in the past. In other words, can a dog have thoughts like “The last time I came to this dog park a big, dark dog ran up to me and play bowed and we had so much fun running around together.”

Readers, as usual, had some truly thoughtful answers to the question, and if you haven’t read them I encourage you to do so. It turns out that many others have been pondering this question for quite a while, and I thought you’d be interested in what they have to say.

Not surprisingly, given the complexity of this issue, there is not a definitive yes or no answer, based on the research that’s been done. Scientists don’t agree by any means, but… we are getting closer to an answer.

The technical term for an internal narrative of a past event is “episodic memory,” or an autobiographical event that is remembered as happening to one’s self. It has been argued (primarily by Tulvig, for those of you who would like to pursue this), that three things are required to be able to have episodic memories: 1) “Conscious recollection,” (titled “autonoetic awareness” — hey, don’t blame me for some of these terms) or an awareness of remembering a past event, 2) a subjective sense of time and 3) a sense of self (as in, these things happened to me). Tulvig and others argue that animals are not capable of episodic memory, that the ability to construct mental sequences of events is uniquely human, requiring self awareness and language at the very least. However, for a long time it was argued that animals had no capacity for long term memory, a belief long disproved by innumerable studies on a variety of animals from Bonobos to Blue Jays.

Some neuroscientists are questioning the arguments of others than animals are incapable of recalling, in journalistic fashion, the who, what and when of an event. The challenge is to investigate if animals have episodic memory without the luxury of being able to ask them. To summarize a coma-inducing stack of research reports[1], Neurobiologist Richard Morris suggests that there are at several reasons to suggest that some animals might posses an “episodic-like memory system.”  First, several studies have shown that rats, mice and some species of monkeys are able to solve tasks that suggest the existence of episodic memory. In addition, both similar brain structures (especially the hippocampus) and similar physiologies related to the storage, retention and recall of memory are found in non-human mammals, suggesting that both structure and function could lead to similar abilities.

A review article by E. Dere et. al. (2006, Neuroscience & Biobehavioral Reviews 30) also argues that evidence suggests that animals can create mental narratives. In one study cited in the paper (Menzel 1999), a language-trained chimpanzee observed a caretaker hiding a food beyond the fence of the enclosure, out of reach of the chimp. Sixteen hours later, the chimp recruited a different caretaker, who did not know where the food had been hidden, indicated the kind of food hidden and directed the caretaker to the food itself.

In another study on Scrub Jays (a highly social bird that lives in the southeastern US), the birds were given both preferred and non-preferred food to cache somewhere in their enclosure (this species commonly stores nuts in tree bark for the winter months, much like squirrels bury acorns in the ground in fall). They had learned that after 28 hours, the preferred food spoiled if left where they’d put it but the non-preferred food did not. The question was: when allowed back into the enclosure with the hidden food, which food would they go to? Sure enough, the jays choose to first retrieve the preferred food if allowed back less than 28 hours after it had been hidden, but the non-preferred (and still palatable) food if more time had gone by.

Some argue that this is indeed good evidence for episodic memory, showing that the jays recalled “what, when and where,” and used this informative to guide their future behavior. However, not all animals have proven equally adept at solving the same problem. Rats, given the same choices, did not respond in the same way, and appeared unable to modify their foraging behavior based on past experience of whether food had had time to degrade or not. Other studies have found that mammals are often not particular adept at performing in ways that suggest episodic memory, so it is important not to cherry pick through the data to confirm what one wants to believe. If you’d like to read about more studies that flirt with answers about how close animals can get to a human-like narrative description of the past, read the review article by Dere et al that I mentioned earlier. It’s not bedtime reading–I had to read it in two sessions because half way through my mind began to smoke–but it you’re interested it’s a great resource. (Thanks to Julie Hecht for directing me to it!)

Here’s one more set of facts that might shed light on the topic: The importance of the hippocampus in episodic memory. All mammals have a hippocampus, the structure in the brain most responsible not just for memory, but in humans, for episodic memory. We know that people who have had damage to their hippocampus’s can remember many facts, but can’t remember narratives. In other words, they lose the ability to remember events as a series of related ‘who, what and where’s.’ In some experiments, rodents with a damaged hippocampus do not perform well on tasks that require a memory of past events, although they are able to use their “short term” memories to solve problems.

Dere and co-authors conclude that the evidence is strong that “animals” (which ones?) “are endowed with episodic memory.” They argue that current research suggests the ability to form mental narratives is yet another example of an ability with an evolutionary history, and that perhaps we should be not be asking  “yes/no” questions, but rather looking at cognitive continuities. I find this approach most reasonable, so here’s my best guess at an answer: Dogs can’t “tell stories” as richly as humans, given their restricted cognitive abilities and lack of language, but they can probably think about the ‘who, what and where” of past events in a way that is at least somewhat similar than not to human narratives. And that’ll just have to do until we have more information, or someone teaches their dog to talk.

[1] Here’s a representative quote from Morris’s 2001 paper: Put together (see Figure 5), the input specificity of transient or lasting synaptic change is determined by the pattern of glutamatergic synaptic activation that, in addition to causing transient potentiation, also sets synaptic tags.

MEANWHILE, back on the farm: I came home from Denver to a massive thunderstorm and cloudburst, and another amazing inch of rain fell just yesterday. It was good to be home, although my trip to the Institute of Human Animal Connection at Denver University was an absolute joy. More about that in another post, because it deserves a lot of attention.

This weekend is supposed to be mostly sunny but chilly, so hopefully I can get in more work in the garden. Willie and I can’t wait to work sheep again, the clinic we attended last weekend was great for both of us. (More on that in a later post too. And a then there’s that case study I want to talk to you about, and another video… so much to talk about, so little time!)

Next week I’ll be in Milwaukee for an evening speech, the first time I’ve given Lost in Translation as an evening talk versus a full day seminar. (FYI, I’m hoping to be doing the full-day version in Chicago next August, details to come soon.) The week after I’ll be doing the Texas Tango, one night in Austin (sorry, it’s full at 300 but I think there is a waiting list…) and San Antonio on Nov. 14th (still room!).

Here’s a favorite recent photo of Mr. Willie boy, happy and relaxed after his lesson at the Shannahan clinic. He’d just had his lesson and is watching the next dog work sheep. You can’t see the other dog working very well, but part of what I love about the photo is watching a dog, completely off leash, lie down quietly and watch other dogs work. So very grown up of them. I posted this photo on Facebook but just couldn’t resist posting it here too… 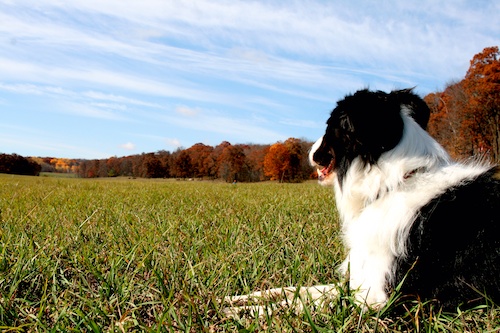 And here’s a fall color photo I took a few weeks ago, just to keep all those luscious hues fresh in my mind: 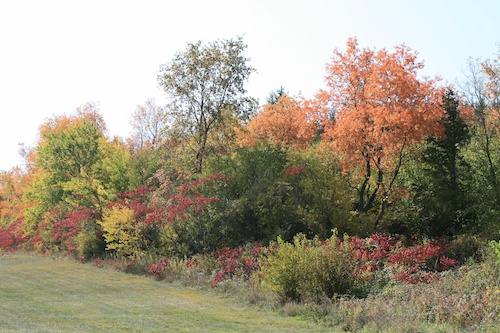