Welcome to an ongoing inquiry about the behavior of people and dogs.
Blog Home >> Animals and the People Who Love Them >> Can Your Dog “Smell” Your Emotions?

As often happens, a study on human behavior got me wondering about how it might relate to our relationship with our dogs. The study in question asked if emotions could be conveyed through body odor. The researchers asked 12 men with pads in their arm pits to watch videos that designed to elicit fear, happiness or a neutral reaction. After confirming that the videos did indeed influence the men’s emotional states (the fearful videos induced “negative emotions” and happy ones elicited “positive emotions”), the pads taken from their arm pits were then presented to women. (Insert bad joke here about what emotion the smell of a man’s arm pits would elicit automatically.)

An analysis of the women’s facial expressions found that the “happy sweat” induced more activity in facial muscles related to happiness (the Duchenne smile). On the other hand, their medial frontalis muscles, associated with a fearful expression, were more active after “fearful sweat.” That’s an impressive finding that suggests a kind of “emotional contagion” based on the sense of smell alone. However, the women did not score as expected on a task that objectively measures internal emotions (rating Chinese symbols as happy or sad), which does not support the “emotional contagion” hypothesis. The authors speculate that there might be different responses based on whether language is involved or not (not for the facial expressions, yes for the symbol analysis).

Either way, we know that people are far better at responding to scents than we imagine. In the chapter “Planet Smell” in  The Other End of the Leash I explain that women can tell whether clothing had been worn by a man or a woman, identify the smell of their own infants, and discern whether something had been worn by a child, an adolescent or an adult. Impressive.

If we can do that, it seems reasonable that dogs could be able to detect changes in our emotional states relatively easily. You’d think we’d have at least some research that attempts to answer this question, but if it’s out there, neither I nor my colleagues can 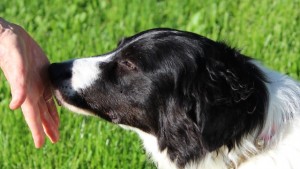 find it. (If you know of any, please fill us in.) There are many people in the world who work scent detection dogs who know far, far more about this topic than I, so I turned to expert colleagues who work with scent detection dogs. Susannah Charleson (Scent of the Missing) and Cat Warren (What the Dog Knows) have a vast range of experience with working scent detection dogs, so I asked them what they thought.

Susannah answered that her Search and Rescue dog Puzzle behaves differently when approaching a person she has been searching, depending on the victim’s state at the time. Long before she makes visual contact, Puzzle approaches people who are in pain, fearful or despondent quietly, even “puppy belly-crawling” toward them. On the other hand, if she has found training volunteers who are calm or excited, Puzzle is all perky and prancy as she approaches. Once Susannah and Puzzle found a lost and very drunken gentlemen who was happily gazing up at the stars, and Puzzle approached as happily as the lost man seemed to be himself.

Cat Warren, who works cadaver dogs (usually called HR dogs for “human remains” I believe), knows a lot of Law Enforcement dog trainers, and tells me that many handlers believe that dogs can distinguish people who are in a high state of fear or arousal just based on their scent. (Which sometimes results in the dogs circling back and targeting a cop who is probably as aroused as the guy being chased!) Apparently there is even speculation that bomb sniffing dogs are not just searching for the scent of bomb-making materials, but for the nervous sweat deposited on the bombs by the people who made them. (We’re talking about home-made bombs here.)

To take things even further, apparently some handlers of dogs taught to search out human remains believe that their dogs can tell and indicate if the person died by natural causes or because of some kind of violent trauma. Cat and Susannah label this as “woo woo nonsense,” and I have to admit it seems equally far fetched to me.

These questions are important to those of us with companion dogs, because of the profound impact our own emotional state can have on dogs. Of course, there is no profit in us trying to pretend to be happy if we’re not, but it does raise some interesting issues related to how our own internal state effects that of our dogs. So many possible implications: If we’re afraid another dog will surprise our dog-dog reactive dog, how much does that influence our dog’s behavior? (Even if they can’t see or hear us.) What about therapy dogs? (I use that term loosely to include dogs who do all kinds of Animal Assisted Interventions.) My colleagues and I at Pet Pals talk about how tired our dogs are after just an hour interaction with patients, and their families, at American Family Children’s Hospital. Could it be in part that they are picking up on stress, not just through voice and movements, but through smell? Given the abilities of a dog’s nose, it seems likely that they are picking up on an entire world that we are often unaware of.

What do you think? Can you think of any event in which you felt confident that a dog was responded to the emotional state of a person only through smell? As usual, I will love reading what you have to say. I spend so much time thinking about visual and auditory clues that I have much to learn about scent discrimination, so send in your experiences and we’ll all learn from it.

Four of our five lambs are thriving, as you can see in this photo. That’s Lady Baa Baa in the front with her twins, (with her mouth open, yelling at me to give her grain), her mom Lady Godiva in the back with her huge single ewe lamb, and yearling Pepper with her little single male nursing away. 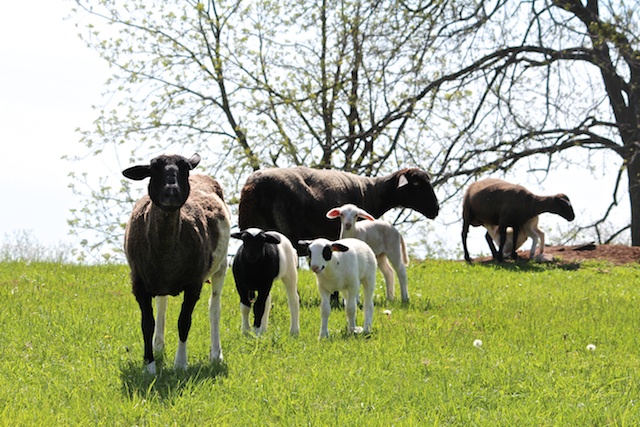 However, things are not so good with Cupcake, who finally had a single male lamb last week. All seemed to be going well, but a few days later Cupcake’s udder has hardened. There is little doubt that it is what’s called “hard bag, caused by a nasty, untreatable virus. She is giving some milk, but not much, so we have taught her little guy to drink out of a bottle. Cupcake gets regular sessions of warm, wet compresses and lots of massaging with mint udder cream (smells great!). It’s such a shame, because Cupcake is a wonderful, attentive mother, and her lamb sticks beside her as if they were leashed together. 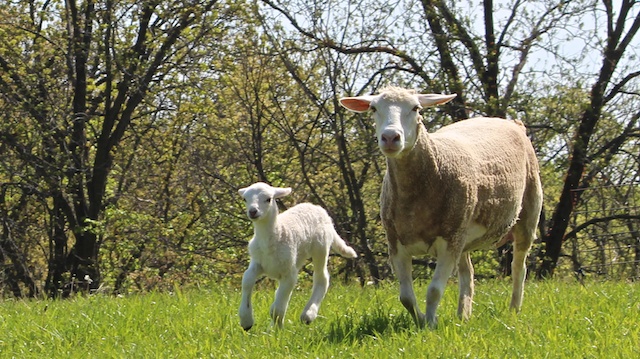 We discovered the problem right after I took the photo above, and the poor things are stuck in the barn now, because we need to treat her at least three times a day. Hopefully they’ll be out on the spring grass again soon. Cross your hooves for her.