Welcome to an ongoing inquiry about the behavior of people and dogs.
Blog Home >> Animals and the People Who Love Them >> Canine Aggression Case Study – Fall 2014

Recently a blog reader wrote in after one of her dogs snapped at her. The incident generated a lively conversation in the comment section, and I thought it was worth writing a post about it. So many of us have been in a similar situation that I thought it would be a valuable discussion for lots of dog owners. The reader (thank you TK!) graciously agreed to let the incident serve as a case study, and I am grateful to her for providing us a jumping off point for a good discussion about how to handle an aggression-related behavioral problem.

I’ll describe the incident, but before I go any further I should be clear that I am summarizing for the sake of brevity. If the dog’s owner was a client I would spend at least forty-five minutes interviewing her and working with the dogs (preferably in her home) before saying much of anything.  Then we’d work together for several sessions until I was confident that things were going in the right direction and the owner had the resources she needed to continue. But here’s the bottom line:

There are two adult humans and two young dogs in the house. I’m going to call the dogs Betty and Sheldon and the owner who wrote in TK. Both dogs are about 18 months of age, both are Border Collies crosses who are fixed, and get a good two hours of exercise and training every day. They play together well, although every once in a while Betty gets “moody,” and looks at Sheldon with a cold, hard stare. Immediately afterward she will either snap out of it or Sheldon snaps at her and she exhibits appeasement behavior. Both dogs appear to be healthy and have no medical issues.

THE INCIDENT: The dogs and TK were returning home after having been away all weekend together. TK and Betty entered the house, and Betty turned and gave a hard stare to Sheldon, who was still outside. He stopped and stayed outside the door. TK began to get their food ready while Sheldon was still outside of the house, and Betty continued to stare intensely at Sheldon. TK tried to change Betty’s behavior by standing between the dogs and perhaps moving her hand in front of Betty’s face to distract her. That’s when Betty snapped at her hand. Betty clearly made a choice to warn TK away rather than biting her, but having one’s dog threaten you with the weapons in its mouth can still be shocking. It feels like a betrayal, not to mention being concerned that you might have been be injured. There’s nothing like canine teeth to remind us that our skin is fragile stuff. Even though I am a biologist I only think of myself as being covered in “flesh” after a dog attempted to bite me.

NOW WHAT? The incident ended there, but what should TK do in the future?  Here are some of my thoughts, but I encourage you to add in your own experience and thoughts about how best to handle this. (Or how you handled it and wish you hadn’t… mistakes often teach us more than success, yes?)

FIRST, LOOK AT THE ENVIRONMENT & CONTEXT: I’d start by asking about the internal environment of the dog. Is it possible it’s in pain? Old and losing it’s eyesight? Old age is not relevant here, but both dogs are not quite adults, and adolescent dogs often change their behavior, even if they’ve been spayed or neutered (although there’s nothing like a female about to go into heat to remind us why the word “bitch” is a dirty word). Both Betty and Sheldon are fixed and appear to be healthy, but it never hurts to confirm with your vet that the dogs really are fine.

At the same time, look carefully at the external environment and the context of the event. In this case, the dogs were coming back into the house after being away with the owner all weekend. I’ve seen numerous examples of what can only be described as “resource guarding” when dogs were away and came back home. My sweet and docile Lassie used to walk back into the house like an especially arrogant runway model if just she and I had been away together, and the other dogs had stayed home. It was as though she’d “copped an attitude” for a couple of days. That’s a context that’s always good to be aware of, I’ve seen it cause no end of problems. It never hurts in that case to let Sheldon in the house first for a few minutes, then bring Betty in later. Secondly, and equally importantly, it sounds as though the food was kept close to the door, so that entering the house also meant walking toward dinner itself, which set up even more resource guarding. I’d do what I could to move where the food is stored, although I know that isn’t always possible.

DESCRIBE THE PROBLEM BEHAVIOR AND THE PREFERRED ALTERNATIVE: Obviously, the most serious problem behavior was that Betty snapped at TK’s hand, but the initial problem was Betty’s cold, hard stare toward Sheldon. I’d say both behaviors are the ones TK needs to change, and replace with something far more patient and polite. What if TK taught Betty that if she sits and waits while Sheldon gets food, she gets something just as good or better? The same for entering the house; what if Betty learns to love it when Sheldon comes in, because when he does she gets whatever it is she wants, whether it is food or access to TK?

“Patient and Polite” is the driving force of the booklet I wrote, Feeling Outnumbered, in which dogs learn that they don’t get what they want by being pushy or competitive, but by being polite. Here, briefly, are some things I’d suggest for TK related to that:

TEACH NEW BEHAVIORS: Teach what I call “Belle of the Ball:” Once both dogs have good sit/stays, ask Betty to sit down beside you when you have a handful of treats. Ask husband (or friend) to bring Sheldon forward toward you (on leash if necessary) and stop long before Betty goes stiff and begins to stare. As Sheldon approaches, Betty gets treats while she sits beside you. As Sheldon moves backward, withdraw the treats. Rinse and repeat, gradually coming closer and closer over a series of sessions, but never going too far too fast. In other words, Betty learns that “Sheldon coming toward me, my owner and food means that I get the food, while Sheldon moving away means I don’t get any.  Eventually we want Betty to be thinking: “Sheldon…. Come Back!” Right now she is probably worried about losing what she wants because Sheldon is competition, but she could learn that the approach of Sheldon means even better things will happen. Oh boy.

Outside of the context of any competition, I’d also teach the following, being sure to spend lots of time with each dog by him or herself. It is so easy to try to work two dogs at the same time when they live with us and we are busy, but I believe (no data, just a belief) that is it critical to ensure that trust, communication and mutual respect flows between each one of us and each one of our dogs, rather than letting the world sort into “us” and “them.” Of course this takes more time. . .  aren’t we glad that TK likes to train her dogs?

Lie Down and Stay. An oldie but a goodie, such a useful cue! I had a female who looked daggers at another female on occasion. When she did I’d say “Get Back” and then “Lie Down,” all in a friendly, upbeat voice. I’d keep her there until her face softened, and then release her and off we’d go to do something fun, or at least, neutral. I am confident that this kept her and the other female out of some serious trouble. Misty was just hard-wired as the kind of dog who got very intense sometimes about her “stuff,” and had to be managed on occasion.

New Tricks, like Spin, or Play Bow or High Five can be great ways to prevent or release tension. It’s hard to look like an intimidating gang member when you’re looking playful. Both of those movements are associated with play, and we know that postures can influence internal emotions, so I’ve used them to disperse tension if it appears. Also useful are simple phrases like “Wanna go on a walk?” or even “Okay!” Most dogs are classically conditioned to feel happy anticipation when they hear those words. Sometimes it helps to say “Stay” first to a dog who is tense, (using a low, quiet voice) and then “Okay!” in an upbeat tone. It’s like fooling their limbic system into another state, from tense and on guard, to relaxed and happily excited.

DAMP DOWN AROUSAL: One key in situations like the one TK found herself in is to ask what level of emotionality you want in your dogs, and mimic it in your voice. If I’d been with Betty and Sheldon I would have kept my voice very quiet, perhaps even sing-song, in order to keep the tension from escalating. This is sometimes a lot easier to write about than to do (I speak from experience) but it is a skill well worth mastering.

LOVE THAT YOU CAN USE THEIR CRATES: Just last week I was tired and in a hurry. I don’t remember what my adolescent dog, Maggie, did, but she was driving me beyond crazy. I had to stop and take a breath, and remember that I could put her in her crate for both our sakes. I knew perfectly well that I wasn’t going to be able to be who I wanted to be at the moment, so I took a breath and said, “Maggie, crate up!” Problem not solved, but a bigger one prevented. Whew. Gotta love those crates sometimes.

Argh, so much more I want to say! But I’ve gone on too long, and it’s your turn. Have you been in this situation? What have you found most useful? What have you tried that you now wish you hadn’t? (Don’t be shy, and remember that wonderful saying I heard years ago: “We train by regret”. Decades ago, before I learned what I know now, I am sure that I would have done little but yell at Betty. Sigh.) I should add that there are some excellent suggestions for TK comments in the recent post, Subliminal.

MEANWHILE, not back on the farm: Jim is still holding down the fort, I fly home tomorrow after a lovely day in New Hampshire with a dear, family friend. I was lucky to catch the tail end of fall in New England. Sweet. 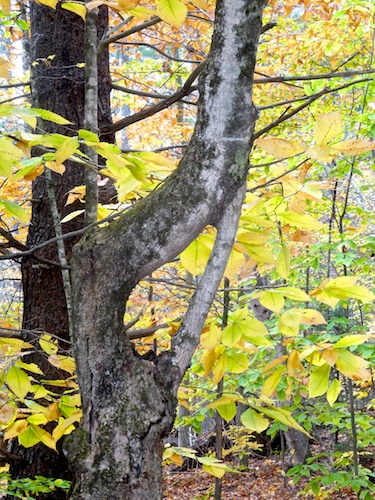 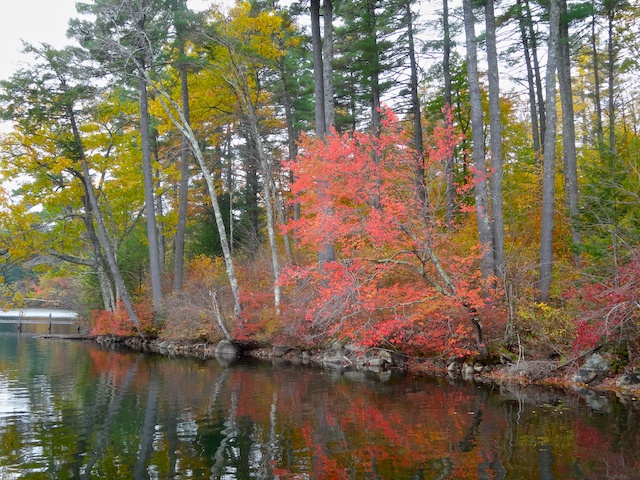 « The Importance of Pets
Who Is Wearing the Pants in this Family? »